To me, that's probably the most impressive feat out of many of the statistics that we've heard about this championship for the Pittsburgh Penguins, because the teams that have been winning and/or have been coming close, have needed a season or two to get their salary cap situation sorted, before they could truly make another good run at it.  The Penguins management team impressed, when they were able to keep a very good core, lose a piece here and there in the off-season, replace those losses and still compete with a diminished blueline until the bitter end.

On top of regular season and playoff successes, the Pittsburgh Penguins were able to do both while still overcoming injury concerns through their lineup, from the crease to the blueline and even up front from time to time.  A lot of credit has to go to the management team for building a very strong foundation of players, from the superstars down to the role players.  Everyone contributed to this championship and that's what makes them one of the league's best teams.

Now, the question is... were us poolies paying any attention to how big this snowball was getting, as it started to roll down the hill? 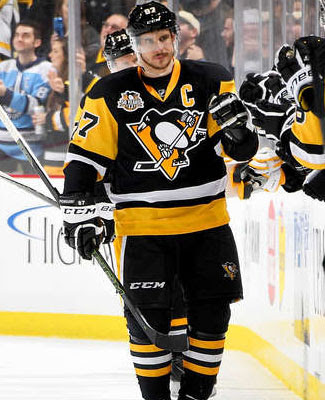 There's no denying that the Penguins are a popular bunch, come draft time, they have just managed to draw so much talent under their umbrella through the years.  This draft was no different, as they were one of the three most popular teams at the draft, taking 14 players to start the year.  They also led the league in 1st round picks with three, including both of their goalies, which I don't believe has ever happened before.  Injuries and a cold start for some led to three drops and two picks at the first swap, while the second go-around saw one drop and one pick-up.  The Penguins then acquired defenseman Mark Streit at the deadline, bringing their numbers back up to 14 to finish the year.

Sidney Crosby, the 13th overall pick in the draft, did not disappoint his pool team, finishing 7th overall in pool scoring, 2nd among all forwards, scoring 44 goals and 89 points in 75 games.  As long as he can get those 70+ games in a regular season, he remains one of the best bets for us poolies and if it wasn't for the huge draw on goalies this year, his pick position would have been higher, not that Brenda & Seward were complaining.

The Penguins did have three players worthy of being 1st round picks, but there was only one goalie out of those three, as Matt Murray was good enough for 23rd overall, while Marc-Andre Fleury was 221st, but still worthy overall at 36th in his position.  Evgeni Malkin was the other 1st round worthy player on the team, leading the rest of the forwards, which also included Phil Kessel, Conor Sheary, Patric Hornqvist, Nick Bonino, Jake Guentzel, Matt Cullen and Chris Kunitz.  Nine forwards in total, with a couple of emerging names, to boot.  The blueline was stacked by the end of the year, having a full compliment of six worthy defenders and in order they were Justin Schultz, Kris Letang, Mark Streit, Ian Cole, Trevor Daley and Ron Hainsey.  The Penguins were a hockey pool power house in the regular season and the pool didn't capitalize on all of it.

It is going to be very difficult for the Penguins to justify keeping Marc-Andre Fleury around at nearly $6 million per year, but his deal is one that could also be difficult to trade, if they went looking for one.  I can't see the Penguins moving Fleury this season, well... not until Murray gets a little bit more action as the number one guy, if that is the way they decide to go.  The Penguins, with Fleury or Murray, have the right pieces in place to be a contending team again and much like other Cup winners in recent memory, there won't be as much of an onus on winning every regular season game, rather just trying to get hot at the right time at the end of the year.  I like where the Penguins are as an organization, there is potential in their system to replace what they'll lose and they'll be back in the playoffs next year, but how far they'll go will solely be determined on how their off-season goes.  Can they strike it rich again?  That could be just as difficult as repeating as Cup champs.

Well, how about that?  That's not bad at all.  It was difficult for the Penguins to repeat, but they sure as hell did it, thanks to a very solid core group of players.  How that core is going to be tested this year is a different story altogether, but what I said last year was pretty well bang on.


With the expectation that Fleury is going to be gone, the Penguins should make enough room to make their roster complete again.  The pieces that are remaining are going to be very popular, thanks, in large part, to the Crosby and/or Malkin effect.  The blueline remains a bit of a mystery, but with Murray slated to be the number one, most spots are pretty well checked off as another good year to come for the Penguins.

The expansion draft is going to be a very big focal point for the Pittsburgh Penguins, probably even more so than free agency, not to say that when the market opens, it isn't interesting.  The current no-movement clause for Marc-Andre Fleury is probably the biggest overhanging cloud in this event and something is likely going to happen, since the Penguins do not want to lose Matt Murray.  The easiest thing to do, in a matter of steps, is asking Fleury to waive the clause and protect Murray, but who knows how much more complicated it could get?

Free agency will be very beneficial to the Penguins, in terms of flexibility and that begins with the unrestricted free agents.  Six pool worthy players could head to the open market this July, including Nick Bonino, Matt Cullen, Chris Kunitz, Mark Streit, Trevor Daley and Ron Hainsey, who had a combined annual cap hit of nearly $18 million.  Bonino and Daley are the likely candidates to return, but at what cost?

Two pool worthy players are both headed to restricted free agency and they are Conor Sheary and Justin Schultz, each could be looking for significant raises to their cap hit for the coming season as well.

Before any expansion draft nonsense, the pool worthy group above in green, nine players, are coming in at $48.8 million, well below the cap ceiling, but we've already outlined where the cap struggles are going to be and they will come.

The Penguins may need to tap into their system to find some bodies that could make the jump and pick up that full-time spot and knowing the Penguins, that could make them very intriguing, come draft time.  The Penguins dipped in there pretty hard already, taking Guentzel and Sheary out, not to mention Carter Rowney as well, but a back-up goalie, like Tristan Jarry, might carry a lot of weight in the 2018 season, if the team doesn't want to spend the big bucks on their back-up.  Jarry has been around a while already, he has seen some minimal time in the NHL, he's 22 years old and could find himself a spot by default.

The Penguins still have their 1st round draft pick, at this point in time, and their cupboards are looking pretty bare, so they'd be wise to keep it and make a selection.  Out of the three positions on the board, forward, defense or goalie, the Penguins could do well picking the best player available and moving forward that way.  Down at the 31st overall pick, it does get awfully difficult to find someone that may work better than the others.  Out of three pretty good lists I've seen, Shane Bowers of the USHL's Waterloo Black Hawks, seems to have the upside of an everyday NHLer and on the Penguins, that could be at just about any spot.

About this time last year, I thought it was a lot easier to project the Penguins, because they had a lot more key pieces in place and that's what made them look so appealing at prediction time.  This time around, they don't have many pieces on defense signed on, we know they're going to lose Fleury and free agency gets even more difficult with the excitement of Vegas rolling around.  Nevertheless, the Penguins do have an experienced core group of veterans, a 2-time Stanley Cup winning goaltender and still some cap room to dabble with, but with the salary cap ceiling not expected to go up by much, it's a tough sell to say they're going to three-peat.  The Penguins should find a way to get something back for Fleury before the expansion draft, which should ease the burden, the off-season should atract some help, but that blueline... that will be the make-it or break-it point for this team.  Playoffs, sure... success in those playoffs?  Seems very doubtful today.
Posted by opiatedsherpa at 12:00 PM