The Colorado Avalanche, on paper, were a pretty decent looking team heading into the 2016 season, as they had made a few moves that was supposed to lift them into the fight for a playoff spot and for the better part of the season, they were right there, swinging away and landing punches.  Unfortunately for them, they ran out of gas a little too early in the race and couldn't make it to the finish, losing their last six games, winning two of their last 10, and finishing five points out of the last wild card spot.

Yes, on paper, they have a lot going for them... a good young forwards core, with just as much talent as a lot of teams that vie for the playoff races, a defense that has an emerging leader and decent support and a number one goalie, which has some veteran leadership sprinkled in there for good measure.  The argument against making the playoffs may lie in their depth, which may not be of the quality or may not be the most compatible within itself, so they are left scratching their heads, looking for answers.

The design is definitely solid, it will just need a little bit of tinkering here and there, but things are definitely coming along for this team.  Any team that is boasting players like Nathan MacKinnon, Matt Duchene, Tyson Barrie and Semyon Varlamov isn't going to be too far along, in theory. 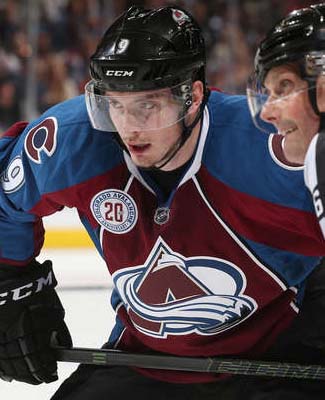 The Avalanche were well-represented in the draft in September last year, as 12 players were taken, including one 1st round pick (Varlamov).  At the Week Nine Waiver Draft, a lack of production led to a couple of drops, but they were supplanted by four pick-ups, as their replacements.  Nine weeks later, there were another couple of drops to one more pick, then the season finished with 13 Avalanche players on active rosters.

Duchene, taken in the 4th round of the draft this year, was the top Avalanche player in the pool rankings, finishing 60th overall, good for a 3rd round pick, scoring 30 goals and 59 points in 76 games this season.

Injuries throughout the lineup were a big concern, as there were not very many players in key positions playing all 82 games this year for the team.  Still, out of the forwards, they finished with 10 players in the pool worthy rankings, including Gabriel Landeskog, Nathan MacKinnon, Mikkel Boedker, Carl Soderberg, Jarome Iginla, Blake Comeau, Shawn Matthias and Mikhail Grigorenko.  Only four of the pool worthy forwards played 80 or more games this year, so there was a great deal of inconsistency in their lineup.

On defense, Tyson Barrie, Francois Beauchemin, Erik Johnson and Nick Holden were all pool-worthy, but they couldn't seem to help this team string together any more wins.

In goal, it was only Semyon Varlamov that hit the heights of pool-worthiness, but he only appeared in 57 games, leaving lots of time to his supporting cast, which didn't help the team's cause a great deal either.

The Colorado Avalanche have to be looking at their rebuilt marvel and saying to themselves that they don't want to end up like the Edmonton Oilers in their rebuild process, having all kinds of upside talent, but no depth to help the team compete.  The Avalanche already have the experience of a division title under the belts of their core, but that experience becomes fleeting, when they can't follow it up.  It will be up to the management to infuse this roster with some quality depth and only then, will they be built to succeed.  If the Avalanche look to that quality depth in the off-season, I think they have a real shot at working their way back into the playoffs, more likely as a wild card, but could sneak into the #3 spot in the Central, if St. Louis falls out.

The Avalanche tried to add some serious pieces to their puzzle, but the rest of the Central Division also managed to stay exceptionally competitive as well, which really hurt their cause.  Additions of Soderberg and Beauchemin in the off-season, then trading for Boedker in the season should have helped and it did, but it wasn't nearly enough.  Nevertheless, this Avalanche team is going in the right direction, now they need that extra little bit of physicality and grit to compete with the big boys in their division.


As you can see, this team is missing a good number of free agents, especially from the pool worthy level up top.  Five forwards and a defenseman are hiding in the free agent levels, which means that there is lots of work to do in this off-season.  Still, there is a good grasp on what the core has going for it and if all goes well, they should be in the thick of it next season.

A couple of names really stand out among the signed players for next season and they include Mikko Rantanen, who did figure into six games last season, but really made his mark in the AHL and he could be in the running for a good spot in the top six next season.  Another name that jumps out is J.T. Compher, who was invited to play with the USA team at the World Championships, going on right now.  The 21-year old 2013 pick has finished his college days and is ready to rock and roll.  Keep an eye on him.

The Avalanche are another one of those teams that could really use a top end defenseman in the pipe, as their depth has not proven to be among the upper echelon, compared to other NHL clubs.  There is a lot of good chatter for Russian defender Mikhail Sergachev, who played in Windsor this past season.  He's listed to be a potential offensive defenseman, with decent size and good skating abilities.

Already in this off-season, we've seen a couple potential RFA's sign over in Europe, as Dennis Everberg and Joey Hishon have been signed.  It will be interesting to see if they're qualified before July 1st, so the Avalanche keep their rights or if they are let loose.

If anything, those two leaving will keep the coffers clear of their big spending that they'll need to do, as the Avalanche need to take care of Nathan MacKinnon, Mikhail Grigorenko, Tyson Barrie and Calvin Pickard in the RFA department, while Mikkel Boedker and Shawn Matthias could both hit the open market.

The pool worthy group, at the top of the table above, are coming in at $42 million for nine players, which should give them a fair bit of room for their free agent work.  Barrie could be the toughest one to sign, as his upside will have to be compensated and that's an expensive market to work in.

The off-season moves or lack thereof will be the most telling signs for this Colorado team in 2017, as they prepare to work against a strong Central Division, which is showing no signs of letting up any time soon.  Somehow, their group either has to shape up internally or it could be a long year of coming close every night, with the odd night of blow outs, either for or against.  If Varlamov can get a little bit more help in front of him, mostly in his own zone, the Avalanche should be that much better.  Still, it's going to be a grind, since most of their main opposition is far more physical than this Avalanche group.  Right now, I don't think the Avalanche have the tools to make the playoffs, but that's what the off-season is for, right?
Posted by opiatedsherpa at 12:00 PM