The Carolina Hurricanes continue to be a tough team to project for the hockey pool, but they are certainly one of those teams that can gain you a lot of ground, since they are full of players that you just don't see too often and could get at a bargain pick.

The Canes definitely have some young scoring on their roster, but they lack that dynamic forward that leads the team, makes his linemates better and gets into the upper echelon of the scoring ranks, making the team a little more credible.  For now, it will be more about scoring by committee, as they continue to build from the back outwards.

The Hurricanes were able to acquire some help in this off-season, which should help their committee scoring, but their real strength will be on the blueline, where the Canes finished with five pool-worthy players last season.  Now, three of those defenders were rookies, who were thrown into the mix, so I would be a bit weary of how many points they might get in their sophomore season, but they should be able to succeed with some solidarity in their ranks.

I'm not going to go out and aim for a bunch of Carolina players this year, but I am going to use my projections to see if I can get one on the late side of the draft, trying to capitalize on how popular they are not among those in my pool and boost my bargain picks. 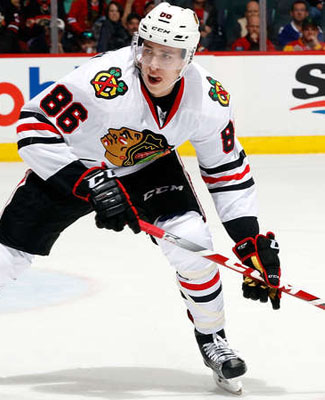 The Hurricanes picked up a player with a ton of potential in a cap clearing deal with the Blackhawks in Teuvo Teravainen and his inclusion in this lineup is a very intriguing prospect, one that should immediately boost the offense in Carolina.

Adding Teravainen gives the Hurricanes a young, crafty forward, who will find a home in the team's top six and it will be just as interesting to see who he will line up with, trying to maximize their return in a deal.

Last season, players with 70+ points were worthy of being taken of the opening round with 27 teams in the pool, so on those merits, the Hurricanes are not quite qualifying for this mention at all.

The top three, Jeff Skinner, Victor Rask and Lee Stempniak, along with the breakout player, Teravainen, could all provide a team with a good bargain pick.  The Carolina Hurricanes do seem to fall through the cracks a little bit at the draft and assuming they can find good seasons, they become very good picks.  The projections, as they stand, would make them 5th or 6th round picks and if you can find them a little bit later, you're in business.

Don't forget about Elias Lindholm or Jordan Staal either, albeit a bit later, they are also waiting in the weeds, looking to impress this season.

The Hurricanes had a surprising amount of pool worthy defensemen last season, but that same group will be filled with sophomore players, like Noah Hanifin, Jaccob Slavin, Brett Pesce, but they will have a good leader in Justin Faulk to help guide the way.  If the forwards improve like the projections suggest they will, the defense should remain pool worthy, with the expectation that they spread the wealth around.

The Hurricanes have one of the more interesting goaltending battles to watch, as Cam Ward signed back with the team, when everyone thought he would go to free agency and this would be Eddie Lack's team moving forward.  Ward signs with the team and I think he is the better qualified to play more games, hence the projections the way they are.  This could work out to be a better split though, so I wouldn't rush to the Carolina crease at the draft.

I like the Hurricanes in the late rounds, especially since they don't have a great deal of top end talent, rather a good collection of depth players that will help their cause.  They should be the kind of team, especially in a deep pool, that could provide some solid scoring late.

The Hurricanes have all of their key free agents taken care of already and as a budget team, they still have $16.4 million left underneath the cap ceiling with their projected 23-man roster and without taking on any excess salary from those cap-desperate teams.

Elias Lindholm and Victor Rask were both facing some off-season surgeries this Summer, but that would have been taken care of early, so there have been no reports of either potentially missing any time.  I am expecting the Hurricanes should be healthy, heading into the World Cup, at the very least.
Posted by opiatedsherpa at 2:00 AM