There were far too many years, pretty much the entire Joe Thornton/Patrick Marleau era in San Jose, where the Sharks would be looked upon to do some big things leading up to a season, only to put up some crazy numbers in the regular season and disappear in the playoffs.

As much as those two are still on the team, it is a significantly different era in the tank, as Joe Pavelski is your new leader, Martin Jones emerged out of the shadows of a divisional rival to be their new backstop and the wookie, Brent Burns, continues to evolve into one of the NHL's all-time beasts.  It's amazing to think about how far they have come in the matter of last summer's off-season and how they translated it on the ice.

The playing days for the grizzled veterans are obviously numbered, but how big those numbers are, only they or the club really know for sure.  They have already imparted an absolute ton of knowledge on some fresh ears and you can really see the impact on those key guys and further down in the lineup.  Their appearance as the Western Conference finalists for the Stanley Cup was a long time coming and they have remarkably continued to add, so they can do it all over again. 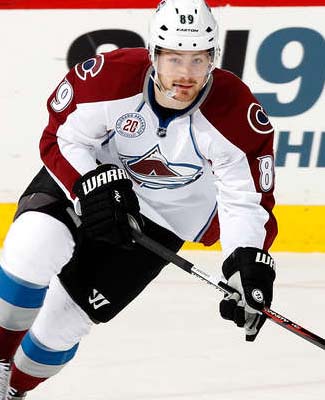 The San Jose Sharks were not poised to lose too much of their Stanley Cup Final core group of players, so when they were able to add a scorer like Mikkel Boedker to their mix, it really says something about what they wanted to do in the coming season (and hopefully, playoffs).  That would be, score even more!

I don't think the Sharks are going to be short on offense this season and since they have found a top end goalie to anchor the rear, there is a feeling that they are going to push the tempo a little bit more and come at their opposition quickly and often.  Boedker has some real potential in his career and we might just see him realize it with some of these talented Sharks on his line.

The Sharks may not be the defending champs, but they sure came close and their point production was certainly a reason why.  Martin Jones will likely win more than his fair share of games, while Joe Pavelski continues to thrive in his leadership role and Brent Burns will be a part of that early blueline contingent that goes in the draft.  With all this talent assembled, Joe Thornton also has a good shot at being worthy of a 1st round pick, so don't forget about him.

More and more depth seem to emerge as you go down the list of the Sharks that could be taken in the pool and either they have really turned a corner or this is an elaborate ruse for us poolies.  Logan Couture, Tomas Hertl and Joonas Donskoi are all plenty good enough to not lead us astray.

After Burns, the Sharks do have a few names that will keep the pool worthiness continue on this list, including Marc-Edouard Vlasic, who will take a turn for Canada at the World Cup and Justin Braun, who has been very steady over the last couple of years as well.  They will try to find a little bit more depth after that, but nothing really jumps off the page to say that it will be them.

You have to believe that the Sharks have all kinds of confidence in Martin Jones, as he helped them all the way to the Cup Finals.  Jones was dynamite for the Sharks, after coming from the Kings through Boston in the off-season and he can call this team his own going into 2017.  The back-up job might be up for grabs this season, with the early consideration going to Troy Grosenick, but that kind of uncertainty might not be the right thing to pick into at the hockey pool draft.

The Sharks are a good gamble this year.  They are a confident bunch in front of their new number one goalie and they keep things fresh and light, thanks to the personalities of everyone's favourite wookie.  I don't think there are a great deal of late round home run hitters in San Jose, but I have probably given you enough reason to give it a try.

There is absolutely no pressing business that needs to happen in San Jose, they are all set to go, free agent wise and it's a good thing too, because they have no room to maneuver under the cap.

Their current projected 23-man roster is coming in with $175,000 to spare, which is barely giving one of their current roster players a bonus for showing up most nights.  This is likely how the Sharks will lineup, minus some minor tweaks, so get used to it.

Despite a long run to the Cup Finals, the Sharks didn't have a great deal of injury concerns after the fact, so we are expecting a full showing for training camp at the moment.
Posted by opiatedsherpa at 12:20 AM