The holiday season is just about over.  The NHL schedule will conclude it's break today, giving all the players enough time for some Boxing Day shopping for those elaborate purchases that are now up to 60% off in stores.  The season will kick off tomorrow, as we head towards the New Year and some outdoor action, but first, we'll recap the week that was, which finished off on Friday.

The condensed schedule made it a little more challenging for a big week in the hockey pool, but we did have a couple of goalies that came away with 6 points, each coming away with a pair of wins and a shutout.  So, in this case, since one of them had already got a nod this season, I would spread the wealth a little bit and this week's Player of the Week nod goes to Frederik Andersen of the Toronto Maple Leafs.

Andersen did play in three games this week, so his record was officially 2-1-0 with a shutout, but generally in my rankings, I do give more onus to the players that show up every night, so he would have eventually won the tie-breakers in the end, but I like the spreading the wealth reason more.

Back-to-back nights, on the road, in Colorado and Arizona, were where the 27-year old Dane made his mark in the shortened week, with the shutout coming against the Avalanche.  Sure, they are not the hardest places to play in the NHL this season, but they all count.

His 6 points have now brought his overall total up to 30 points on the year, having played in 28 games in total.  Andersen currently ranks 31st overall in pool scoring, good enough to be a high 2nd round pick in the draft today.  That's pretty darn good, considering Brian didn't snap him up until the 4th round in the draft, 84th overall.  Andersen ranks 3rd in the round, just behind a couple of better bargains in Mark Scheifele of the Jets and Jakub Voracek of the Flyers.

It's been a little while since Cam's team was in this position, Week One, to be exact, but his team has made its return to the Mover & Shaker and with it, comes a spot back in the money places.  No, it isn't 1st place again, but with a really good week, he's back in the conversation and still with more than half the season left to play, that's all a team needs. 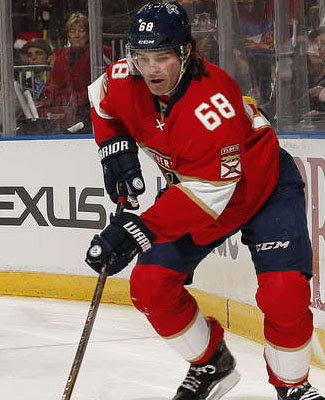 It was a 32-point week in only five days worth of action in the week, which was definitely impressive.  That hot streak was 7 points better than the next two teams below him in weekly scoring, which for a lot of teams, will move them up in the standings quite quickly.

And indeed it did.  The standings had really tightened up, from 2nd down to 8th, 9th and even 10th, so Cam made the jump up from 7th place to 3rd, moving into the last money spot, but his team is far from comfortable.  Okay, his team is now 7 points back of 1st place, 4 points back of 2nd place... that's good!  But 4th place is only 2 points behind and 7th place is only 8 points back, so if his team was to find another cold streak, he could be back where he started the week.

Jaromir Jagr of the Panthers was his top player in the week, finishing with 5 points and moving into 2nd all-time in NHL scoring at the same time.  His new Columbus connection of Cam Atkinson and Sam Gagner each finished with 4 points, while Scott Hartnell of the Jackets, Chris Kunitz and Ian Cole of the Penguins all finished with 3 points in the week.  Only one of his active players finished with a zero, which makes for a very complete effort across the board.

Wilton's team was supposed to bounce back from his last trip to the Basement Dweller nod, which was the last week before our Waiver Draft players became active, but the shortened holiday week has done his team in again.  It was a week-low of 10 points and his team has now dropped down to 20th place, falling from 17th at the end of Week Ten.

Out of his 10 points, three players picked up a pair of points: Adam Henrique of the Devils, Ryan McDonagh of the Rangers and Damon Severson of the Devils, keeping most of his scoring in the State of New York.  That means that only four more players picked up a single point and the other half of his team laid dormant with nothing to show for their action in the week.

For the most part, Wilton's team has stayed pretty healthy, only missing Craig Anderson to his unfortunate situation at home, as his team currently ranks 6th in skater games played and 14th in goalie minutes, so his players are showing up.  Maybe he's just looking forward to the New Year as much as everyone else is.

The money race has been somewhat outlined in the Mover & Shaker, especially given that our top team moved into the money this week.  The big headline here is that the race is far from over and from 1st to 3rd place, Benson, Brian and Cam, is only separated by 7 points.  All three teams have been able to put up big weeks, but remarkably, Benson has not had a Mover & Shaker yet this season.  Go figure.

Mover & Shaker weeks are the way to go and looking at the standings, 20 points separates 1st to 8th place and one of those top weeks could really shrink down that gap and even 30 points, with more than half the season to go, can still give hope to teams down in 14th.  Don't forget, we still have another Waiver Draft to aid our teams too.

Is there any solace taken from Wilton that his team was not only the Basement Dweller, but also the goon team of the week?  Wilton's team was atop the weekly goonage with 30 minutes to his credit, but it was a tight race, where our overall band of penalty minute mercenaries, Kristy & Don's team, were only 2 minutes behind.

Kristy & Don's lead is now 59 minutes and Wilton is in 2nd place in this race, so it's really about these two teams this week.  The race remains tight for 2nd place, but all of these teams need to throw down in their respective NHL games and make some noise.  Ryan, Marcie, Cam and Derek B. are all within 4 minutes of Wilton, but that doesn't get them any closer to the duo.

Week Eleven saw Troy Watch head all the way into Thursday night, but he was saved by his top goalie, Tuukka Rask of the Boston Bruins, so the survivor pool moves another week with four teams remaining.

The schedule in Week Twelve, which doesn't start until tomorrow, will feature a few more games, but not a great deal more, plus, we roll into the New Year, which limits the weekend action a little bit.  The schedule will be somewhat compressed this week, but there should be lots of chances for our survivors.

This Sunday, we'll kick into the Outdoor Games again, as the Centennial Classic will go on New Year's Day, which will lead into the Winter Classic, on January 2nd.  Stay tuned for a full preview of each game, as we draw closer.  The Winter Classic preview will come around the same time as the Newsletter, so there will be lots of blog posts, as we turn over another page on the calendar.

Games were down in the schedule and if you watched a few of those games late on in the week, you would have noticed that the holidays may have started early for a few teams, as their efforts were quite poor.

The average take from each game was down in every category, as the pool only took 11.9 points per NHL game in Week Eleven, not our worst week, but down from the 12.4 we had the week before.  I don't foresee our Week Twelve to get much better, especially with the turkey still wearing off and a very compressed schedule.

Friday night's scratches will begin in Calgary, where defenseman Jyrki Jokipakka was a healthy scratch again for the Flames, when they took on the Canucks. The guy with the fun name to say has only played in 24 games this season for the Flames and hasn't really taken advantage of that opportunity, having only 1 goal and 5 points.

Scott's team isn't hurting too badly with one of his players underachieving, as his team is still in 4th place to open the week, but he could always wish for more from certain guys.

Another defenseman who has seen his fair share of scratches already this season is Colorado's Patrick Wiercioch, but this would be his first scratch since being activated in the Waiver Draft.  Sure, his overall totals, 2 goals and 8 points, were better than injured players, but the Avalanche have struggled this season, especially defensively and Wiercioch has been a target of the coach's disdain, so take that for what it's worth.

For Wes, he just needed more points to get back to a respectable level this year and his team is making strides in that direction, now up to 23rd.  His team's next target is the pool's goon team, while his Lady Byng side tries to just pick up points.

Talking about goons, how about Antoine Roussel of the Stars?  Actually, that's not fair, he is a double-threat in the pool, as he does pick up points in that potent Stars offense, but he also has a spot saved for him in the box most nights.  On Friday night, he was the only one of these guys that was dealing with an injury, but of course, it was an undisclosed injury.  He's listed as day-to-day and will probably make good use of this break for a quick return this week.

Troy really wants to have the goon team this season and he's counting on Roussel to lead the way for that honour.  Troy's team currently sits 14th in the PIM Pool, back down to 105 minutes back, so his team really needs to step it up and start taking some names.

Finally, it was a bit of a surprise scratch for Rangers defenseman Brady Skjei, who has been doing well in his rookie season, so far, but has tailed off just before the holidays and the team has sent a message, by making him a healthy scratch before the break, that he could really use a little extra pep in his game.

For Derek B., he picked up the young blueliner in the Waiver Draft, but has only seen 2 points in his first nine games worth of action.  Hopefully, this healthy scratch does him some good and he gets back on track.
Posted by opiatedsherpa at 7:00 AM