Talk about 'expect the unexpected.'  Go on, talk about it.  Okay, I'll give you a hand.  How about our Player of the Week for Week Nine?  That's right, it's a New York Rangers goalie that isn't named Henrik Lundqvist.  Antti Raanta has blown the minds of many, as he was given the reins this week and the Rangers were wise to do so, as his hand was hot and he finished the week with 10 points.  I don't suppose you expected that, did you?

Raanta made three straight starts (and could be in line for more) and came away with a 3-0-0 record with back-to-back shutouts for his 10-point performance in the week.  A win against the Jets and then shutouts against Chicago and New Jersey were his highlights this week and he comes away as the clear winner of the honour in the pool.

The 10 points brings Raanta's totals up to 21 points on the year, which is good enough for 71st overall in pool scoring, 22nd among all goalies.  There are starters with less points than Raanta right now.  Cory Schneider, Ben Bishop, Semyon Varlamov, both Dallas keepers, both Detroit goalies... the list goes on and on.

Being that good means that he has to be some kind of bargain, right?  Stacey M. sniped Raanta in the 11th round, 256th overall, and he's now ranked 2nd in scoring from that round, 1 point behind Stacey C.'s proxy pick, Alexander Wennberg of the Blue Jackets.  That is turning out to be a fine pick, especially if he can keep going.

The first week after the Waiver Draft is usually a good one for scoring, because we were able to snap up some of those players who have been running hot and not taken in the pool and we could get rid of those players that were holding us all back.  Well, it all worked out well for Brenda & Seward, who finished the week with back-to-back Mover & Shakers, thanks to a brand new season-high, 38 points.

Who woke their team up?  Seriously. 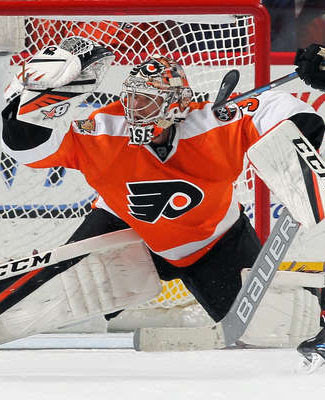 It was a fairly complete effort from their team, as only one player failed to pick up a point in the week and ironically, it was one of their Waiver Draft pick-ups.  How about that for luck?

Nevertheless, Steve Mason of the Flyers still had a pretty good week with 6 points to his name to lead the way for the duo's side.  Sidney Crosby of the Penguins and Marcus Johansson of the Capitals were not very far behind with 5 points each, while Chris Kreider of the Rangers and Daniel Sedin of the Canucks finished with 4 points each.

With back-to-back Mover & Shaker nods, the pool's second duo have taken the express elevator up the standings.  At the end of Week Seven, they were down in 21st spot and after two amazing weeks, they are back in the money conversation, now in 7th place, only 7 points out of 3rd place and gaining quickly.

What a horrible week for Marcin and a bad time to have it as well.  With the teams that were chasing his 3rd place team at the end of last week picking up the pace, having an exceptionally pool Basement Dweller week has sunk his team like a rock in the standings.

Previously, his team was up in 3rd place, all happy and cozy, a buffer each way, but then the injuries happened.  Corey Crawford, Jordan Staal, Rick Nash and Zdeno Chara were all hurt in the last couple of weeks and the walls came crumbling down.  Marcin's team only managed 11 points in the week, which dropped his team from 3rd place down to 12th.

Eight of 14 active players on his roster was able to pick up at least a point, but three players topped out at 2 points and it was just an exceptionally cold week.  If he can get his injured guys back before too long, his team can definitely recover.

Well, with Marcin's team falling off the map, 3rd place was up for grabs this week.  In the week, John was the one that took advantage of the spot, jumping up to 3rd place.

Oh, but wait!  There's more news.  Both Benson and Brian didn't exactly have great weeks, as they both dropped points off of their own lead to the group of teams that are chasing them down.  Benson did open 10 points up on Brian, but dropped 5 or more points to the teams chasing them down.

Brian's buffer between 2nd and 3rd place is now down to 1 point and now it's 8 points down to 7th place from 2nd.  Oh boy, we're having ourselves quite a race at the 1/3 point in the season.

Kristy & Don were not short on PIM's on the opening week of the second segment, as they opened up their lead to 47 minutes over Marcie's team.  Their new recruits from the Waiver Draft kicked in with a couple minors, but they weren't short elsewhere.

Troy, who beefed up his attempt at the PIM pool title at the Waiver Draft, saw his team reward him with the goon team of the week nod.  His team finished with 46 minutes and his team leapt over eight teams in the race and his team is now less than 100 minutes away from the lead.  This could be fun race to watch now.  Does he have enough?

I think the root of Grant's elimination from the survivor pool stems from our Player of the Week, as he was relying heavily on Henrik Lundqvist to do the bulk of his heavy lifting in this mini-game and when the Rangers number one, fell to number two this week, his team was doomed.

So, now we're down to four teams in the survivor pool... Mike, Troy, Stacey M. and John S..  Already this is making the All-Star week more interesting, as we could crown our winner by then, if it all goes according to plan.

Week Nine's schedule was 51 NHL games and we saw some excellent returns, thanks to our new players and dropping our duds.  We saw our second-best scoring rate of the season, 12.86 points per NHL game, thanks to our best representation from our skaters and goalies, 18.8 games and 104.4 minutes per game collected.

Surprisingly, the penalty minutes didn't quite get the same treatment, as it was only our 4th-best week for the average per game, 9.9 minutes, but they'll come, I'm sure.

Defense was also thrown out the door, as the collective was a combined -14 in the plus/minus rating department, but that's okay.  We're not measuring defense and with our goalie participation this week, points were going to be had regardless.

The Philadelphia Flyers were without defenseman Shayne Gostisbehere on Sunday afternoon against the Red Wings, as he has been listed as out day-to-day with an upper-body injury, believed to be a hand injury.

As a 2nd round pick, he has been somewhat of a bust for Clayton this year and going with the sophomore this early was one hell of a gamble that isn't quite paying off, hence where he is in the standings after this week.  Will things improve?  It's really hard to say.
Posted by opiatedsherpa at 11:16 AM