The New York Rangers made no secret of their desire to tear down the team and rebuild at last year's trade deadline and they have been able to keep on the plan through the 2019 season and they still found a reasonable level of mediocrity in the process, still finishing 26th in the regular season, somewhere in-between missing the playoffs and last place.

The Rangers battled their way through the year, but when a team rebuilds, they will certainly lack depth at both offense and defense, so their goaltending was hung out to dry more often than not and their 32-36-14 record wasn't too bad considering.

Say what you will about how they were on the ice, expectations were pretty low for this team and if anything, they possibly exceeded those expectations a little bit, despite a lack of individual successes.  Restocking the coffers of prospect talent requires the need for some losses and in a lot of cases, a lot of them.  It's not the easiest for a team's fan base, but the team's management has been nothing but upfront about the whole thing, so that makes things a little easier to stomach.

If you ask me right now, they're moving in the right direction and before too long, there will be some top end talent under the bright lights of Broadway again. 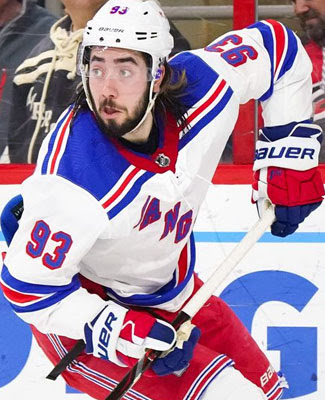 It was a breakout year for forward Mika Zibanejad, who was fairly consistent for the Rangers this year, posting 30 goals and 74 points in all 82 games for the club and that was good enough for 46th overall in hockey pool scoring, 38th among all forwards.  On a rebuilding team, that isn't a bad year at all, rather it's a pretty darn good year.  The 25-year old has quickly established himself as a cornerstone piece of this franchise and could be for the next few years, at least.

In total, the Rangers finished the season with 11 players worthy of being taken in the hockey pool on their roster, including Zibanejad.  Five forwards, four defensemen and both their goalies saw enough time and produced enough points to be there, which made them into a decent support team, if you had picked them in good spots in the draft.  Up front, Chris Kreider, Pavel Buchnevich, Ryan Strome and Jimmy Vesey were worthy of a selection, while on the blueline, Tony DeAngelo, Kevin Shattenkirk, Neal Pionk and Brady Skjei all had worthy seasons.  Seasoned veteran Henrik Lundqvist and rookie keeper Alexandar Georgiev each finished in the top 50 goalies this year, thanks to a decent split in time, since there was really no point in pushing the 37-year old too hard in a non-playoff year.  Georgiev was up to the task and performed admirably.

Call it the end of the season playing with nothing to lose, but the Rangers and their assets that they picked up at the trade deadline didn't look too bad. Yes, teams may have looked poorly upon them and took them for granted, but they did acquire some real talent from Boston and Tampa Bay and this rebuild that they are going into doesn't look as dire as some others around the league. I would wonder if that small sample size would be enough for Rangers management to do an about-face and go free agent shopping again, like they normally do, or if they are indeed going to be patient and start growing their own talent. I'm sure the marketplace would like a quick turnaround, back to winning, but building a franchise from the ground up does have some staying power at the cost of lots of patience. Either way, I don't see the Rangers improving greatly in 2019, the free agent class isn't that great and the youth movement needs more time.

The Rangers didn't improve a great deal and that certainly weighed heavily on Henrik Lundqvist, who failed to register a 20-win season for the first time in a long time.  The Rangers have been patient with this rebuild, granted it has only been a year since they blew the whole thing up.  They have been able to make good use of their expiring contracts at the trade deadline, acquiring more picks and prospects in the process, so they will be loading up the cabinet here right away.  If that isn't exciting, I don't know what is.  Did I say exciting?  I meant exhausting.  Patience is exhausting.

After Ryan Spooner was acquired by the Rangers at the deadline last season, it looked like he was going to be one heck of a fit with the team for the 2019 season.  That was not the case.  The Rangers didn't wait long to part ways with Spooner after a slow start, dealing him to Edmonton in November, acquiring pool worthy forward Ryan Strome in the deal and then Spooner was dealt again, from the Oilers to the Canucks.  It wasn't the season that was envisioned, that's for sure.  The return in the deal from Edmonton though panned out for the good on the Rangers' side, so that was a plus, I guess.


The fluidity of the Rangers lineup has the outlook for pool worthiness up in the air for next season.  It's just too hard to tell how it will all look before the off-season officially begins.  What we can say is that there is a reasonable foundation of players, like Zibanejad, Kreider, Shattenkirk and Skjei on the roster, while the value of Lundqvist is on shaky ground, given his age.  It will be an interesting summer for these guys, who will likely stay the course of a patient rebuild, but they can be proud of how far it has come in such a short period of time.

The 20-man roster above has already cleared the projected salary cap floor of $61 million and still has plenty of wiggle room under the projected ceiling of $83 million today.  This doesn't mean the Rangers should be going out shopping for big ticket free agents, rather they should take care of their business in-house and possibly look for those veteran players to mentor their youth.

Pavel Buchnevich, Neal Pionk and Tony DeAngelo are their three pool worthy RFA's that they need to take care of and I can't see them being too expensive this summer, leaving all of that wiggle room for future signings.  The team's UFA class is not even worthy of mentioning, there isn't a whole lot on that list at all.

The Rangers debuted a lot of young talent in the 2019 season, leaving the possible rookie class of 2020 a little short on numbers.  As much as the Rangers enjoyed some fairly balanced goaltending in this past season, the Hockey News seems to believe that they might have the next best thing in Igor Shestyorkin, who will be coming over from the KHL this fall and is expecting to be in camp.  The 23-year old is being touted as one of the best goaltending prospects under the NHL umbrella and if he's as good or better than what they had this year, then he might certainly be one to watch.

The Rangers are another one of those teams that were exceptionally lucky at the draft lottery, winning the 2nd overall pick, moving up from the 6th overall selection, and they are poised to take another dynamic player in the process.  If the Devils are taking Hughes, then the Rangers will get Kaapo Kakko as their prize, a dynamic offensive forward that set some records in the Finnish Elite League in the 2019 season and was quite good for Finland in their World Junior gold medal win.  Kid has some real flair to his game and he'll certainly bring the flash and dash to the big stage.

If the Rangers are not going to deviate from the plan, continue to build through the draft and not make any big splashes on the free agent market, then the climb with be gradual and that may be what's best for them, as a big push for the playoffs may rely heavily on the aging Lundqvist and there's no guarantee that he would be able to play the excessive amount of hockey to make that push, while the other goalies in the system don't have a lot of experience to lean on for next season.  This team does have a fair bit of talent under their roof and I can see improvements being made to their overall total, this season finishing 20 points out of the playoffs, I can see that number getting smaller, which means they're going in the right direction.
Posted by opiatedsherpa at 12:00 PM