It's the second-to-last Newsletter of the regular season and I think it's fair to think that there won't be any playoff pool this year, I've added another ball team to my summer, so I will likely be too busy and not in front of the computer a whole lot to do all the updating, so yeah... there's that!  I will be looking forward to a summer outside and not stuck in front of the TV.  Maybe when the Canucks return to the playoffs next year, I'll be excited again.

I would sure like to say, since Sergei Bobrovsky of the Columbus Blue Jackets had already won a Player of the Week nod this season, that I can turn around and offer it to someone new, like Tyler Bertuzzi of the Red Wings, who finished with 10 points.  Since Bob had himself a 12-point week again, I can't really do that, it just doesn't feel quite right.  Player of the Week has got to be the best player and that certainly was Bob.  I was looking forward to writing that post about Bertuzzi, until I saw Bob's numbers though.

The Blue Jackets are fighting for their playoff lives and coming up trumps with their number one goalie, who has now won five games in a row, including going 4-0-0 with a pair of shutouts in Week Twenty-Six and now the Jackets are holding the first wild card spot in the Eastern Conference, but are still far from safe at the moment, now with only three games left this season.

Bobrovsky shutout the Islanders on Tuesday, beat the Canadiens on Thursday, 23 saves against the Predators on Saturday and then finished the week off with a 38-save shutout against the Sabres on back-to-back nights on Sunday.  He has really dialed himself in over the last week and a bit and the Jackets are on their way to riding a hot goalie into the playoffs.

With this stupendous run of wins, Bobrovsky has now taken over top spot among all goalies in hockey pool scoring with 36 wins and 90 points in 60 appearances this season, only 1 point better than Andrei Vasilevskiy of the Lightning and 2 points better than the injured Marc-Andre Fleury of the Golden Knights.  All three rank in the top 25 overall in pool scoring and would be considered the only goalies suitable for the 1st round of the draft this year.

Well, who knew it would be a season-high week so close to the end of the year?  I was ready to punch in Stacey M.'s e-mail address into that 2nd place e-mail money transfer on Sunday last week, but oh no, here comes Kristy & Don to make things "interesting."  Just on Tuesday, Don was worried about finishing 5th in the standings, looking at the other two teams that were charging and didn't think his team had the legs for it, but here they are, ruining the last week of the season... in one way, but making it kind of interesting in a different way. 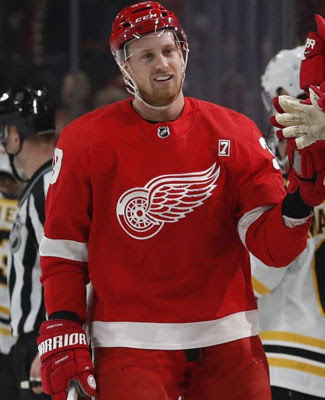 On top of having the Player of the Week, the duo were also collecting on the red hot Red Wings, who had another player in the double digits as well, Anthony Mantha, also finishing with 10 points, so 22 points between a couple of players was the same amount of points as the two teams that were vying for the Basement Dweller nod, but I will get to that in a little bit.

The drop-off from the top two players was pretty good, as Ryan Pulock of the Islanders and John Gibson of the Ducks finished the week with 4 points and they also had four more players with 3 points each, so they did have some consistency through their lineup, even one active player that didn't register a single point and they still put up the best week of the season.

If there is one thing that the duo has done this season, it has defied some of the new conventions that we've been seeing among the money winners or some of the drafting strategies among them of late, as they have continued on the tradition of big goalies and big defense and mediocre forwards to get the job done, as their forwards rank tied for 15th in the pool, while their defense is 4th and they have the best two goalies.  The debate will rage on in regards to what the best strategy is in the long run.

After all of that, we did have ourselves a tie for the Basement Dweller again this week, as both Troy and Scott finished with 11 points each in Week Twenty-Six, so we had to break it down to the tie-breakers to get this one all worked out.  First up, goals scored and by a fairly wide margin of 5-2, Troy's team kept him out of the basement by lighting the lamp a few more times, leaving it all to Scott's team for another week.

A couple of injuries and some healthy scratches were not helpful for Scott's team this week and his team fell back down into 25th place, as even the tanking effort of Derek B.'s team was able to put up a few more points and jump back into 24th.  Matt Murray of the Penguins was Scott's only saving grace, registering 4 points in the week, as there were eight players on his team that failed to pick up a point in the week.

This was Scott's 4th Basement Dweller nod of the season and it has just been a horrible year for his luck, as there were a number of duds on his team that came out flat out of the gate and the Waiver Draft, no matter how good his picks were, were just no help to him this year.  Talk about a long year.  At least his team is only 3 points out of 24th, so there is a chance it won't finish last this year, but he'll need some help in the final week of the season.

Well, I think about this time last week, I was writing cheques or doing up transfers for 1st place and 2nd place and that was very premature of me.  Sure, Stuart still won't be caught for 1st place, but I certainly didn't see a season-high point total from any team coming this late in the season, but there were Kristy & Don, collecting massive amounts of points from a couple of players and they zoomed up to catch Stacey M.'s team, which was caught resting on their laurels.

Now, the duo and Stacey's team will start the week tied, with the duo leading in goals for the tie-breaker, both teams 39 points behind the leader, 21 points up on 4th place.  I guess I shouldn't say that it is all locked up for 2nd and 3rd and that we just have to decide the order, this last week taught me that lesson in a hurry.  Still, will Grant or even Jesse (23 points back) be able to put that kind of week together?  I suppose we shall see.

Nothing premature about calling the rookie race... a few weeks back!  Derek B.'s team continues to roll, posting another 10 points and bringing his overall total to 120 points from freshmen this year.  No other team has even sniffed triple digits yet.  This one has been over for a long, long time.

The shootout has been somewhat a dud for the better part of the season, so it does look like Grant will come away with some money, if his team doesn't miraculously find a massive scoring streak in the final week of the regular season.  Grant's team has a 3-goal lead in the shootout and Mike's team sits in-behind, 13-10, but with the shootout being fairly scarce for the better part of the season, it seems fair to call it... again, barring a miracle week of non-stop shootouts.

Stuart's team extended its lead over Clayton's team in the game-winning goals department, now sitting at 47-40 with a week to go and Clayton's team didn't post a single winner in the week, thanks in large part to his long list of injuries to key goal scorers on his team.  Looks like Stuart's team will take home some extra cash on the year with a mini-game as well.

Scott's team still holds a narrow lead over Stuart's in the overall race for goon team of the season, 493-492, which still doesn't pay, but is still fun to have a look at.  It's no wonder Stacey M.'s team was caught napping, it was the goon team of the week, 28 minutes, and was too busy resting its eyes in the penalty box and not picking up points to keep the duo away.

Well, if the plus/minus statistic was a payable one, Neil's team would have run away with it a long time ago as well, as his team has been very responsible in their own end and at the same time, put up enough points in key situations to make a difference in the year.  His team has a combined rating of +121 this season, 42 points better than his nearest competitor.  That's fairly remarkable, to be honest.

The pool did bounce back from some lowly scoring weeks, picking up its best weekly total of points in a month, with 646 points.  It was our best per game average in five weeks at 12.4 points per NHL game in the week, which was quite something as well.  Participation didn't go up any, as injuries and scratches continue to mount and there should be a significant downturn in participation in the final week of the season, as some players will be rested ahead of the playoffs, while very few will be making that push to the playoffs.