The Carolina Hurricanes are a strange bag of cats, because there is nothing about their roster that suggested that they would be anywhere near a playoff race, but here we are, only a couple of teams before the playoff-eliminated teams and we look back and see that the Canes were not in horrible shape at the end of the regular season, but looking ahead, the tornadoes of changes are ready to roll through the off-season.

One of the bigger story lines in the Hurricanes' season was their playoff possibilities versus keeping some of their key unrestricted free agents, Eric Staal and Cam Ward.  In the end, the New York Rangers came calling and Staal was moved out for a couple of 2nd round draft picks and the Hurricanes still seemingly stayed close to the playoffs, finishing only 10 points out of the last wild card spot in the East.

A lot of these years can be tough on a franchise, as they're not good enough to make the playoffs and get the fan base excited, nor are they bad enough to get back down to the best chances at a good pick at the Entry Draft.  Sure, the Hurricanes did well in the 2015 draft, but when you look ahead, you could agree that they would be a team in need of one of those top three picks in 2016, but instead, they'll pick 13th and the chances of that player being as good as the top guys is significantly low.

Nevertheless, the Hurricanes have been making moves in the right direction, but their foundation still needs some work and we'll touch on that further on in this post. 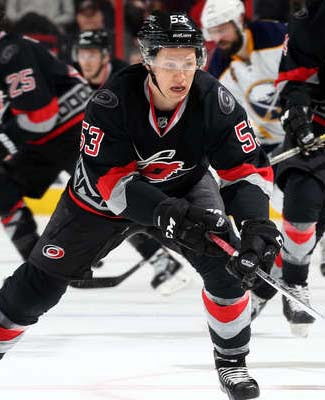 In the pool this year, the Hurricanes were among those teams that had 12 players taken at the draft in September, which wasn't a bad number of pulls, as it was just below average across the board.  Injuries and a lack of production were to blame for a few drops in Week Nine's Waiver Draft, but one of those drops was picked up right away in a goalie swap, so it only worked out to be a couple of actual drops.  In Week Eighteen, the Hurricanes blueline was tapped for a couple of picks, bringing their total back up.  The trade deadline, however, was a good time for the Hurricanes to make some trades and they did move out some talent, leaving the hockey pool with only nine active Hurricanes on rosters at the final buzzer.

When it was all said and done, the top Carolina player in pool scoring was forward Jeff Skinner, who finished the year with 28 goals and 51 points in all 82 games, which was a great year for him.  Playing in all 82 games is something he hasn't done since his rookie season, when he dazzled us all with 63 points, so the Hurricanes are sure hopeful that he can get back to those numbers again in 2017.

The Hurricanes were not blessed with a lot of pool worthy talent up front, as they finished the year with only four forwards in the ranks, including Skinner.  Victor Rask, Jordan Staal and Elias Lindholm were the other three of note, so there's no doubt that they're going to need more scoring punch up front and soon.

However, Carolina is trying out the Nashville school of thought, putting together a bit of a defenseman factory, as the Hurricanes finished the year with five pool worthy blueliners, as they didn't fail to disappoint.  Justin Faulk, rookie Noah Hanifin, rookie Jaccob Slavin, Ron Hainsey and rookie Brett Pesce all finished in the top 108 in defensemen scoring and you could probably sneak a pick or two out of there next week with reasonable results.

In net, the Hurricanes were splitting time between Cam Ward and Eddie Lack and they both finished in the top 54 of goalies in pool scoring, but with Ward looking towards becoming a UFA, this could be Lack's team moving forward and I think the franchise is okay with that.

For 2016, the Hurricanes are going to need a whole lot more than a kid like Ryan Strome to get their train back on the tracks or even back to being somewhat competitive. No, with the free agent pool being as shallow as it is, their plethora of young defenseman still developing at various stages of the minors and juniors, the veteran core of the team, most of which under-performed last year, will need a big boost or a re-shuffle before they get to that point again. The only way Carolina proves to make a name for themselves this year, is if they manage to snake a deal or two, much like the Islanders did before the 2015 season, scooping a couple big players from teams in salary cap trouble. As doubtful as that seems, I would look for the Hurricanes at the bottom again.

Well, those young defensemen at various stages could arguably be the difference between where I thought they would finish and where they finished in the end.  The Hurricanes opted for another defenseman in the draft, taking Hanifin over Strome, increasing their stake in their blueline and it paid off for them in some better results.  The upgrade, picking up Lack from the Canucks, over Anton Khudobin was also a big help to this side, that shouldn't be forgotten either.  Still, the Hurricanes did finish out of the playoffs and may have overachieved in 2016 and that isn't really to their credit, as discussed earlier.  They were much better off taking a dive this past year and trying to make a go of it next season.


A good number of their pool worthy players are already set to return for next season, which means good things for teams looking to find some sleeper picks on the blueline.  I think we'll see an upgrade of Lack's draft position next season, if the Hurricanes don't find a great deal of help behind him, but I'm sure they'll contract someone to take on the role of back-up before the season starts.  Unless this team can find a lot more scoring, Lack's upgrade will be stifled by very little offense to help get him those wins.

Last year at this time, I was looking at the blueline help, but I ventured with the wrong guy, as Haydn Fleury didn't make the jump last year, rather he went back to junior and he'll be helping the Red Deer Rebels at the Memorial Cup next week.  Instead, the Hurricanes had three other rookies jump up and give notice to us poolies.  As this team looks for offense from the forwards, there is some hope that they can sign 2015 draft pick, Sebastian Aho from the Finnish Elite League, as he was a dynamo at last year's World Juniors for Finland and he could be a good shot in the arm for this team.

Looking at some of the draft history for the Hurricanes, it wouldn't come as a surprise if they were to draft another defenseman in the 1st round and with two picks, both theirs at 13th and Los Angeles' pick at 21st overall, one of those picks is destined to be a defender.  If I was picking for them this year, I would be looking at upgrading their offense and trying to find some size at the same time.  With the 13th pick, I would say they should be adding some size and some power to their forward ranks, which leads me to Max Jones of the London Knights of the OHL.  He's a kid that has a good physical portion to his game and that could go a long way in the rebuild for these Hurricanes.  Eight picks later, there should still be a decent defenseman to take, as they seem somewhat plentiful in this draft class.

The pool worthy players heading to free agency in Carolina are few, but will each have their own story.  It sounds like Cam Ward will likely head to the open market, if the Hurricanes can't trade his rights ahead of July 1st, as the team may be looking in a new, younger direction in net.  Victor Rask, on the other hand, has been a pleasant surprise as a young player in the organization and his offense will be rewarded with a new deal as a restricted free agent.

Ryan Murphy, who was hurt for a good portion of the year, is also up for a new deal this Summer and he should get a decent bridge deal, out of his entry-level contract and hopefully, he'll bring some more upside to that up-and-coming blueline.

The nine pool worthy players under contract in the table above are now coming in at $27.2 million, while the whole signed collective is coming in at $47.9 million.  This Hurricanes team could do a lot of good this year, taking on some compensatory picks for taking on some bigger contracts, helping other teams and getting paid a premium to do it.  With a potential expansion draft coming next season, there would be very little risk for this team to consider it.

The Hurricanes are in need of some more direction from their management team, before we can be confident that they can start winning and be a great team to pick players from for our pool teams.  On paper, the team lacks punch from the forward ranks and there is no guarantee that they are going to find any in the free agent market, nor where they're picking has a great chance of finding an NHL-ready forward to make that jump right away.  There's no question that the blueline and the goaltending will hold them in a lot of games next season, but it would be a detriment to this team, if they found their way back to the middle of the pack, with no playoff placement.  I think they'll end up with a better pick next Summer in the draft, but their offense will dictate how much of an improvement it will be.
Posted by opiatedsherpa at 12:00 PM