Another year, another playoff appearance for the Detroit Red Wings in 2016, as this franchise continues to make it to the post-season on a regular basis.  The Red Wings finished in 3rd place in the Atlantic Division standings this year, which granted them their 25th straight season in the Spring Dance, where they almost fell off the map against the Tampa Bay Lightning, dropping the series in five games.

The winds of change are certainly blowing through in Detroit and it was a struggle to even make the playoffs this season, narrowly beating the Boston Bruins for 3rd in the Atlantic, as no team from that division qualified for a wild card spot in the Eastern Conference, but the Bruins were just a little more worse off than the Red Wings in their year.

The Red Wings' goaltending situation was somewhat uncertain near the end of the year, as the combination of Petr Mrazek and Jimmy Howard seemed to be figured out at times in the season, but only to see one falter and the other take over for an extended stretch, which led all the way into the playoffs.  This situation would have done nothing for the confidence of the team, as a whole, despite saying all the right things in interviews and such.

It should be worth noting that the two reliable veterans that the Red Wings lean on, year in and year out, Henrik Zetterberg and Pavel Datsyuk, each saw significant declines in their offensive production, which certainly didn't help things, but Datsyuk also missed a good stretch of the season with an ankle injury, which didn't help matters much either. 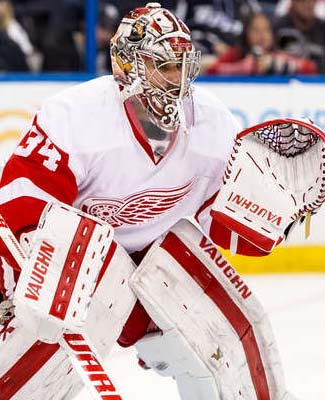 The Red Wings were a team with an average number of picks in the draft, as 13 of them were taken in September and both goalies went early, with Howard taken in the 1st round and Mrazek taken in the 2nd round and one of those likely being a bigger gamble than the other.  Week Nine saw two drops to three pick-ups, as Dylan Larkin wasn't taken at the original draft, but scooped up immediately when made available.  Week Eighteen saw a couple more pick-ups and no drops and the Red Wings finished the season with 16 active players on pool rosters by the end of the year.

Mrazek was the best player on the team, in terms of pool scoring, as he bested Howard for the most time in the Wings' crease, appearing in 54 games, winning 27, earning 4 shutouts and 2 assists for a 64-point season.  That was good enough for 40th overall in pool scoring, a decent 2nd round pick, if the draft was re-done to the final rankings.

At forward, there were seven forwards of note and they were Henrik Zetterberg, Pavel Datsyuk, Dylan Larkin, Tomas Tatar, Gustav Nyquist, Justin Abdelkader and Brad Richards.  Zetterberg was only ranked 84th overall in pool scoring, which would give you a stark idea about how much of a drop off he saw in his game and how potent that Detroit offense was all year long.

On the blueline, Mike Green, Niklas Kronwall and Danny DeKeyser were the only three worthy of note here in this off-season and Green was only ranked 38th among defensemen, so it wasn't like he was any screaming hell for the team either.  Still, their defense was good enough to help them win most nights and earn that playoff spot.

There are going to be some difficult decisions that need to be made for this Red Wings team, but when you really break down how this team is made up, the fallout of any major move out of town should not drastically effect the team and their winning ways.  Management has a good hold of where the roster is and the number of quality replacements in any position should make for an easier transition.  I think the Red Wings will continue the path that they are on, no matter the circumstances, barring an absolute tragedy, of course.  Don't be too afraid to project the Red Wings well next season.

The Red Wings did do well in the regular season, finishing 3rd in the Atlantic Division is nothing to sneeze at, given how good Tampa Bay and Florida were and just ahead of these Wings.  Management had made two good moves, picking up Green and Richards in the off-season and they were fortunate to have the speedy Larkin exploding on the scene.


And this is where we begin to see the rub for the Red Wings... the outlook for the 2017 season.  With the rumours swirling around that Pavel Datsyuk is going to call it an NHL career and head back to Russia for the last years of his playing career, it would leave a giant lump on the books, as his $7.5 million is on a 35+ contract, which would stay on, whether he played in North America or not.  If he decides to go back, it would not only leave an offensive hole, but a huge cyst on the books that the team won't be able to clear until the end of the year.  Unlike Johan Franzen, who wasn't over the age of 35 when he signed his huge deal, it can stay on the Long Term Injured Reserve and not cost the Red Wings any extra.  We eagerly anticipate the final decision.

If Datsyuk is to leave, the Red Wings will desperately need some help from their youth, as their cap hits will be the only thing that's really manageable with $7.5 million of their cap space playing in Russia.  The team still remains somewhat high on Anthony Mantha, who I had pegged last year, as one who would get a long look in camp, but that really didn't work out for him, as he struggled last year with injury and confidence.  Evgeny Svechnikov will be 20, coming out of the QMJHL, and the Red Wings are loving his size and style of play, so they have him penciled in as one to watch next season.

The Red Wings can do as many deals as they like in the veteran sense, trying to stay in the playoff hunt, but they are desperately in need of finding some top end talent somewhere and the blueline seems like the best place to start.  The Wings have some undersized talent waiting to bust out, so size should be big consideration.  Logan Stanley, who plays across the lake from Detroit, in Windsor, is a huge 6'6" kid that needs to fill out and will certainly be looked at as a shutdown defender.  He isn't going to set the barn on fire, but that will be a job for the other kids that can do it, he'll be around to cover those guys, when they make their run.

Since the salary cap is potentially going to be a huge issue for the Red Wings, they can take some solace that Kyle Quincey and his $4 million cap hit and Brad Richards and his $3 million cap hit are headed to unrestricted free agency.  If these two wanted back in the fold, they would likely have to take a serious pay cut to do so.

Other than Richards, Petr Mrazek is the only other pool worthy player on the Red Wings in need of a new deal and his status is restricted, but that isn't to say he won't be looking for a significant raise. The Wings are not known for spending a whole lot on goalies and they have another lump of a contract in Howard, so how this plays out will add a lot more intrigue into their off-season.

With Datsyuk still on the books and Franzen not on LTIR, the total sum of the signed bunch above is coming in at $65.4 million, which is a fair sized number.  Not the biggest, but still pretty sizeable.  The nine players that are pool worthy and signed, including Datsyuk, is in at $42.3 million, which is a little more concerning, since they are the ones that will be counting, regardless, and the team will need to add upwards of 14 players to that mix.

I don't think we can rule out Detroit dealing Datsyuk's lump sum to a budget team, retaining some salary, just to lighten the load, but that will likely cost the Red Wings a decent pick in the draft to do so.

Datsyuk, Datsyuk, Datsyuk... the 2017 season result relies so heavily on the final decision made by the crafty veteran, that there really isn't much left to say about it.  The Red Wings either are or are not a playoff team next season, depending on whether he stays or goes.  This team could stomach one more year of production, even lesser production at that cap hit, than see it all go for nothing for a whole year.  If he decides to go, I would imagine that a trade would happen, but even still, you can't directly replace that much quality with $3.5 million in potential space, it just seems unfeasible.  And even if the Red Wings convince Datsyuk to stay, they may only push for a wild card spot next season.  Somewhere, somehow... the Red Wings will need a miracle to keep their playoff streak alive.
Posted by opiatedsherpa at 12:00 PM