There were some pretty high expectations for the Winnipeg Jets in the 2016 season, none of which were met and the team found themselves as sellers at the trade deadline and the dynamic of this team going into the off-season had to be adjusted.

The Jets were being built from the crease outwards and they were pretty comfortable with their number one, their blueline was getting bigger and better and they were complimenting it with some fairly reasonable scoring up front... but that was all on paper.  It didn't quite work out that well for this team, as they went 35-39-8 and finished 25th overall in the standings.  A very poor showing, indeed.

The leadership core changed, as Andrew Ladd was dealt to Chicago at the deadline, Dustin Byfuglien was chosen as the guy that will stay long-term out of the two and now this team looks at their core group of youth and they have to think that they will be back in it before too long.

No team wants to finish poorly in the regular season, but what it does do is give a franchise a chance to make some changes and with a little bit of luck, those changes can expedite that process. 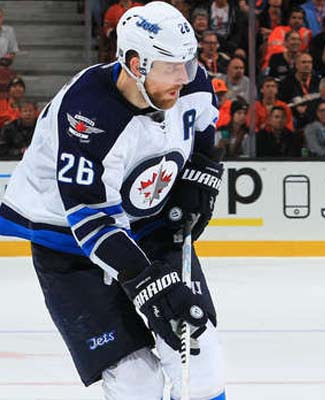 In the hockey pool this year, the Jets were a pretty popular team heading into the year.  13 Winnipeg players were taken in September, as both of their goalies to start the year were picked in the 2nd round and then it was a good mix of their scoring forwards and defensemen down the line.  The Jets added a player to the mix in Week Nine, as their third goalie joined the ranks and made an impact, while their numbers remained the same after Week Eighteen.  When it was all said and done, after the trade deadline, there was still 13 Jets on active rosters at the end of the season.

Blake Wheeler was the best of the bunch and he quietly had himself a damn fine season.  The 29-year old forward finished 16th overall in pool scoring, thanks to 78 points in all 82 games, which would make him into a 1st round pick, by the rankings.  He was taken with a 4th round pick in the draft, making him into quite the bargain pick.  Does this season finally concrete him in as a top end pick in the draft?

As for other pool worthy players from the Jets' organization, all three goalies finished in pool worthy spots, Connor Hellebuyck, Ondrej Pavelec and Michael Hutchinson all finished within the top 54 keepers in the pool.  Mark Scheifele, Bryan Little, Mathieu Perreault, Drew Stafford and rookie Nikolaj Ehlers were all worthy in the forward ranks, while Dustin Byfuglien, Tyler Myers and Jacob Trouba were all decent defenders for pool teams to rely on last season.

Today, this team is short of a guaranteed fireworks show, but if Nikolaj Ehlers is going to make an impact in the 2016 season, the Jets could go from a wild card team to a 2-3 team in the Central Division, no matter how difficult the Central may be going into next season.  The Jets have the makeup of a team that plays a very hard-nosed Western Conference game and one that can dominate the East, where they can make up a lot of points in the standings.  It's hard not to like where this team is going and I think the Jets will reward those who have faith in them.

There were undoubtedly some high hopes pinned on the young Danish rookie, I must admit, but the Jets did have a make-up that suggested that they were ready to grind out a tough season and make a go of it in the Central.  The Central was ridiculous this year, as the Stars ran a huge offense, the Blackhawks didn't suffer, the Blues were strong and the Avalanche added some flavour, for sure.  This team still has lots of positives to build from, but they didn't have the showing that I thought they would around this same time last year.


The Jets do have a lot of cash tied up in their big stars and all of these guys are signed on for next season and those top guys will be expected to be in the pool again next season.  A player like Toby Enstrom, does stand out as a guy that should have been pool worthy, but his season in 2016 was a bit disappointing and he needs to bump his numbers up to be worth that big cap hit.

The Jets are not short on young talent and the main guy to watch out for in training camp next season is Kyle Connor.  The NCAA standout was signed to a deal earlier in April and there are some pretty high expectations for the 19-year old, who was taken in the 1st round of the 2015 draft.  If he is going to forego some school years, you have to think that the Jets see a player that can play right away.  Don't forget about Josh Morrissey, who played in one game in 2016, he may figure into the mix one way or the other this year as well.

You know that luck I was talking about earlier?  Well, the Jets had a bunch of it on Saturday night, as the Jets moved up from the 6th pick overall to the 2nd pick overall and it is very likely that they will be able to find some more offensive punch with a kid like Patrick Laine.  Laine has been dazzling in the Finnish Elite League, showing off all kinds of skills in shooting and skating, so it will be a quick jump from one men's league to another.  The Jets will really have a prize to covet for years to come.

The Jets also have the Blackhawks' pick in the 1st round and with Chicago already being eliminated from the playoffs, which appears to be the 26th overall pick.  That could give them another top prospect in any one of the positions, stocking up their cabinets even more.

The Jets are going to be working hard on a few restricted free agents this Summer, as Mark Scheifele, Jacob Trouba and Michael Hutchinson are due up for new deals and two of those three deals are likely going to make a serious impact.  Unrestricted free agency won't take too much away from the Jets' roster this Summer, especially from a hockey pool perspective.  Depending on what kind of deals get handed out this Summer, it will be interesting to see how much of a player the Jets will be in the free agent market.

An early count of signed players brings us to $59.8 million in cap hits already for next year, which looks good against a $71.4 million cap ceiling from last season, but we must remember, the Jets are a budget team and likely won't spend to the cap, unless they have a real push for the playoffs.

The 2017 season for the Jets shouldn't be about the learning curve, but it likely will be.  They are going to install a whole bunch more youth into this lineup and trying to translate into wins immediately is going to be very difficult.  It's not impossible, but it is very improbable.  If there was one element to this team that leads me to believe that they could do something special next season, it would be their blueline.  Extending Byfuglien long-term, keeping Myers around, Enstrom won't hurt them and then re-signing Trouba will be key.  These are the guys that will make or break the Jets, as they should have the goaltending to compete and then it is a bunch of youthful enthusiasm up front.  In that Central Division, they'll have their work cut out for them.
Posted by opiatedsherpa at 12:00 PM