If there was ever a team that needed their patience to pay off, it would be the Islanders and it would have to happen right now.  By patience, I mean all of the patience they have shown with their prospect pool.  They've held onto a lot of players for quite some time now, some have paid off in drips and drabs, some got shot out of a cannon in the last year, but those that have hung around and failed to make a name for themselves at the top level, need to start doing it now.

Unless you've been living under a rock this summer, you're well aware that the franchise player for the Islanders took his ball and literally went home to Toronto and now the only team that he ever knew has been left scrambling towards the 2019 season and they only have a smaller glimmer of hope at the moment.

It would be both mean and untrue to say that the Islanders are completely barren and devoid of talent, after the departure of John Tavares, but a lot of times, you look at those teams that are progressing in the right direction and you see that they have a centrepiece.  I will touch on this team's new centrepiece here shortly, but there also has to be a sense of disappointment that this team will have to overcome at the start of the season, which could set the tone for the entire regular season.

I don't want to be all doom and gloom for the Islanders, but it's really kind of hard not to be. 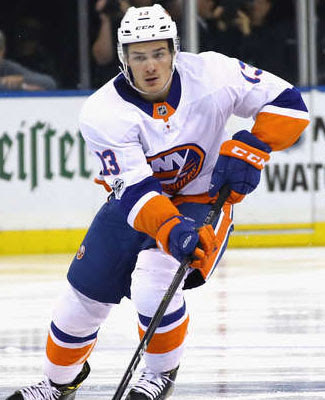 With the departure of John Tavares in the summer, the New York Islanders immediately become Mathew Barzal's team and he'll be the focus point moving forward.  It took him an extra season in junior, before he was ready to take the league by storm and fortunately for the Islanders, he did just that.

Barzal is a very dynamic offensive player and now he'll receive the brunt of the top defensive pair minutes from their opposition on a nightly basis and he'll have to develop some real chemistry with his teammates and in a hurry, if they want to even think about competing in the Metropolitan Division this season.

We haven't seen a whole load of rookies finish their first season in an opening round position, but Barzal did do just that, finishing 19th overall in scoring, but I would hesitate to suggest that he could replicate that number in year two, especially without the buffer of Tavares on the roster.  He'll be the guy that the opposition keys on, which could hurt his numbers, comparatively speaking.

Josh Bailey has been improving year over year in the last few seasons and he'll be leaned upon for more offense this season.  The Islanders will definitely need the likes of Anders Lee, Jordan Eberle, Brock Nelson, Anthony Beauvillier and Andrew Ladd to really step up as well.  These are the guys that I have highlighted to be worthy of selection this year, as their minutes should stay pretty high throughout the campaign.

The Islanders have a decent defense corps, which could produce some pool worthy numbers this season.  Nick Leddy leads the group and my projections from the back end, in the 40-point range, followed by Ryan Pulock, Thomas Hickey, Adam Pelech and Johnny Boychuk, who will all share the spoils of the remaining minutes.  This could be the saving grace of the Islanders, possibly keeping them from a truly embarrassing 2019 season.

The tandem for Long Island has changed in this off-season, seeing Jaroslav Halak getting swapped out for Robin Lehner, which is good from an age perspective, but Lehner has done little to cement his place as an NHL number one.  I think he'll split time with Thomas Greiss, but the incumbent goalie edges the minute debate for me, but I wouldn't look for an Islanders goalie too early in this year's draft.

Being hesitant on how successful the Islanders will really be in 2019 will be the leading factor on why I would stay away from this team late on, unless there is one of the names listed above available.  Maybe the European free agent signing of Jan Kovar could be considered a decent sleeper in the coming year, but I would wait for training camp to make that call.

Losing the team's premier player surely does help the salary cap number a whole bunch, as the Islanders, still more of a budget team, has just under $10.5 million in cap space right now.  They could still be looking at adding a piece or two, just to shore up some depth, but there isn't a whole lot out there to really throw money at.

There's nothing too significant on the injury front for the Islanders, heading into training camp.  A few late season knocks should have been taken care of, once the doors to the training facility open to everyone.  That's a plus!
Posted by opiatedsherpa at 1:00 AM