The Minnesota Wild are looking to build on what was a pretty impressive 2018 season, where they finished 3rd in the Central Division, thanks to a very strong team game throughout their lineup.

For the most part, the bulk of that 2018 team is still assembled for the upcoming 2019 season, adding a little bit more youth and some more veteran depth to their roster.  That would immediately suggest that this team isn't going to be very different between last season and this upcoming season, if not a little bit better after a season of building chemistry with one another and only making minor changes to the landscape.

If there was one element to this Wild team, that would best describe them as a whole, it would be a good hockey IQ team.  They're not the fastest team, they're not the biggest team, they just have a good combination of those two elements, with a sprinkle of good finishing skills and leadership capabilities.  Let's not overlook the goaltending element either, as their netminding combo is nothing to be ashamed of either.

For us hockey pool types, there is plenty to be excited about, when looking at the Minnesota Wild and they are going to be a team that you might be able to sneak a pick or two out of and possibly find some good bargains in them.  These guys will score some goals and win their fair share of games, so don't overlook them at the draft. 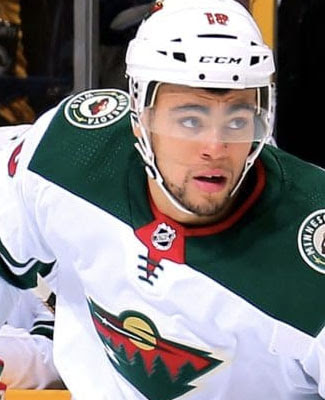 Part of that youthful infusion for the Wild this season will be forward Jordan Greenway, who finished his college career and played at the PyeongChang Olympics last season, before finally joining the Wild for six games at the end of the regular season.

The 21-year old rookie is a hulking figure on the ice, 6'6" and over 220 lbs., which should look menacing in front of the opposition net.  My current projections of him are somewhat low for upscale rookies, but Joel Eriksson Ek had a hard time breaking through in this Wild lineup last season and the system might be better suited to those who have been in it for a season or two.

Over the last four seasons, goaltender Devan Dubnyk has been a 1st round pick in the final scoring rankings and with the team that the Wild are setting to put forward this season, he is expected to be there once again after the 2019 regular season.  I would imagine that he'll be quick to go in this year's draft.

The Wild are stocked well with potential pool worthy forwards for the coming year and down the line, so I would gather that they will be pretty popular this year.  Mikael Granlund, Eric Staal, Jason Zucker, Charlie Coyle, Mikko Koivu, Nino Niederreiter, Zach Parise, Joel Eriksson Ek and our intriguing player, Jordan Greenway.  This is going to be a strong team, looking at all that talent.

On the blueline, the strength continues down the roster, with four more worthy players on my list.  Ryan Suter, Matt Dumba, Jared Spurgeon and Jonas Brodin are leading the way for the Wild here and as you can see, there are some strong numbers here.  I don't think you can go wrong picking up one of these strong Wild defenders.

As busy as Dubnyk stays, Alex Stalock is still getting some solid minutes as the Wild backup.  Last season, the 31-year old still appeared in 28 games, which should be around where we should see his numbers be at the end of this season as well, making him a low-level backup option for the draft.

The Wild do have some strong numbers down the line, so they could be considered to be a team to look at, when you're struggling to find some of those late round picks.  There are just so many Wild players in the worthiness conversation, that one or two might slip down in the draft, so you might want to keep your eye out for these guys falling down.  They could make some good bargain picks.

A strong team is going to cost money and the Wild have spent quite a bit.  With no more free agents left to sign, the Wild have a projected 23-man roster coming in with a little less than $1.7 million left in cap space.  With this team's depth, they might not need to shop for more help through the trade deadline, but it's a long season and anything can happen.

There's still a little bit of concern about Ryan Suter's ankle, but the 33-year old veteran is going to push forward and test it out in training camp.  Suter had his ankle surgically repaired near the end of the regular season, which kept him out of the playoffs and could be attributed to the team's quick exit from the playoffs.  The injury did appear serious, but it sounds like he'll give it a go.  Keep an eye on him, just to make sure he's 100% before drafting him.
Posted by opiatedsherpa at 1:20 AM