Whatever it was that kicked the Philadelphia Flyers in the rear end last season, I'm sure many of their supporters are hoping they haven't forgotten what that was or they're prepared to give the same kind of effort that impressed many in 2018.

The team's best players were again playing to the level we have seen out of them before, some other players really stepped up their game and then for others, we're now waiting to see if they can breakout even further, to propel this side deeper into the playoff picture.

This summer, the Flyers were not overly busy, I'm sure that they looked at what they had last season and thought that they were certainly moving in the right direction.  They did, however, bring back a familiar face to the fold, their only major move of the off-season, signing James Van Riemsdyk to a unrestricted free agent deal and he will be welcomed back with open arms, I'm sure.

With the addition made, their top prospects playing at a high level at the top level, the Flyers are certainly a team to watch for the 2019 season, I'm thinking.  Some teams may have taken their lack of success in season's past for granted a bit, so I would imagine that the road will be a bit tougher, but these guys do have the tools to succeed and us hockey pool fanatics will likely benefit greatly from it. 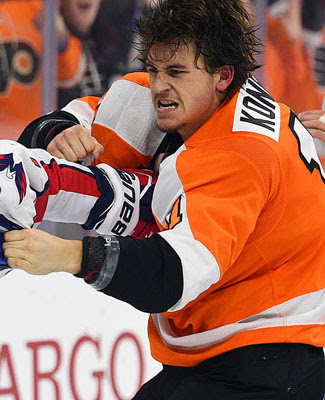 He's definitely an exception to the sophomore slump, as Travis Konecny had himself a great second season with the Flyers in 2018 and he's certainly trending in the right direction to keep that going.

He went up from 28 points in 2017 to 47 points in 2018, this kid should certainly be on your radar for something special this season, I'm thinking.  Adding Van Riemsdyk to the mix in the off-season, only helps to solidify the top nine, where Konecny will be playing, you'll probably see some pretty good chemistry in there somewhere.  The Flyers should have plenty of offensive options this season and a lot of these pieces seem to be very interchangeable.

The big boys are back in the conversation.  Both Claude Giroux and Jakub Voracek each came back with a vengeance last season and they are getting some better projections for it again this season.  Giroux was the 3rd ranked player in hockey pool scoring last season, but I am not expecting him to duplicate that season, yet still be in the point-per-game range, along with his teammate, Voracek.

Sean Couturier really stepped up as well last season and he could find himself going pretty high in a number of hockey pool drafts, including mine.  The re-acquisition of James Van Riemsdyk has to be somewhat exciting as well and that's reflected in his projection.  Wayne Simmonds and sophomore Nolan Patrick are also expected to have worthy seasons for the Flyers, really rounding out a solid lineup, from top to bottom.

Besides a couple of young dynamos, the Flyers blueline still leaves a little bit to be desired.  Sure, Shayne Gostisbehere and Ivan Provorov are emerging as elite talents from the back end and I've got the feeling that they'll do some good things this season, but after those two, it gets a little thin on the projection front.

The Flyers will go with the same tandem as they did last season, with Brian Elliott and Michal Neuvirth getting the split of duties for the 2019 season.  Both goalies are on contract years, both to become unrestricted free agents next summer, so they will be playing for jobs next year and I am thinking that there will be a solid split, making them both worthy, but Elliott is my favourite to take the majority of the work.

Besides those players who have already been picked out in this post, depth for the Flyers could come at somewhat of a premium.  The Flyers were very top heavy last season, so finding quality depth players to help out your pool team was difficult.  I think it will be much of the same this season, but you could keep your eye on a couple of those rookies, Oskar Lindblom or Mike Vecchione, as they could make a run for a spot.

The Flyers are in good shape for the coming season, already having cleaned up their free agent situation and they still have almost $10 million in cap space after their current 23-man roster.  Usually the Flyers are one of those teams among the highest spenders, but not this year.  They've actually managed the books quite well to this point.

A torn ACL in last season's AHL playoffs will sideline young defenseman Samuel Morin until well into the New Year, so if you're scrounging around for a rookie blueliner for the coming year, depending on what mini-game you might be after, Morin won't be your guy right away.  He does have some potential upside to his game, so don't lose his name for years down the road.
Posted by opiatedsherpa at 12:45 AM