The Detroit Red Wings are definitely one of those teams that are synonymous with very few changes over the last few years, but it was a very upheaving Summer for the regularly patient club, as they had to promote from within the organization for their new coach and they outsourced some more of that veteran presence.

There are still a number of key pieces from years previous in place, but it is the complementing additions of Mike Green to the back end and Brad Richards to their depth down the middle, which will keep this team in the hunt for another year in the playoffs.

This season will not only be a test on the management's off-season signings, but also a good test on whether or not he's gotten the best bang for his buck, as Ken Holland has worked his way into some salary cap ceiling trouble and may need some cap relief, if things don't go very well to start the year.  More of that will be outlined down below.

Let's not forget about the kids, either.  The Red Wings have some interesting names in the fold, but a very well-stocked roster, as it is.  The Red Wings can work on some cap relief, if some of these kids turn some heads in training camp, but they'll certainly need some help to make the roster, like something unfortunate to happen to a teammate. 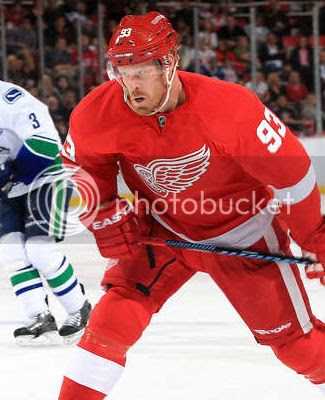 How much is left in the tank for forward Johan Franzen? A concussion, which was suffered in January, ended his 2015 season early and it sounds like the head injury is still a major concern, heading into training camp.

Franzen, already a part of this blog's Injury Prone List, has been a very good pool contributor in the past, finishing three of the last seven seasons in the top 100 in pool scoring, throw a couple more seasons in the top 200 of pool scoring.  His 34 goals in 2009 still ring as one of his more impressive stats in recent memory, but given his new concussion trouble, he may not even remember it.

If he even makes it back into the lineup at all in 2016, how effective will he really be?  As you can see above, I don't value him very high and he will even take further discounts on draft day, given his injury prone status.

The Red Wings didn't have a 1st round selection to their team in last year's 23-team pool and it would seem unlikely that they will have one in this year's either.  Injury concerns and some uncertainty with how consistent they can be will likely make a few people prioritize other superstars over Detroit's bunch.  They'll find their way into the mix, eventually, I'm sure.

Well, if the Red Wings are not going to field any opening round picks through my projections, that means there are some pretty good forwards in this bunch.  Henrik Zetterberg, Pavel Datsyuk, Tomas Tatar and Gustav Nyquist highlight the veteran and younger sections of this lineup, as they will be leaned upon to put up the bulk of the numbers for this Red Wings team.  Justin Abdelkader, Riley Sheahan, Brad Richards and Darren Helm will be around to add that depth offense, as this team will have a new coaching style on display, which begs the question, "how will that affect the depth?"

The Red Wings, if anything, did a great job to take the focus off of Niklas Kronwall, who didn't really pan out to be the next coming of Nicklas Lidstrom or Brian Rafalski, allowing him to go back to a lesser role, with the acquisition of Mike Green.  With Danny DeKeyser coming around as the top prospect that he was, coming out of college, the Wings are boasting quite the top trio of defenders, giving their blueline some depth again.  This could be a good turning point for this team and the pool teams that are able to pick these guys up.

Number one goalie, Jimmy Howard, only saw a marginal improvement from a so-so 2014 season, but he was picked up by a pretty good back-up in Petr Mrazek, who is scheduled to be there again for him.  This team will live and die by the health of their top skaters, which may take the pressure off of the goaltending a little bit, but you can't take the pressure away completely.  If this team remains healthy, after the eventual return of Datsyuk (see below), then their numbers should improve and Howard's will come along with them.  That's the thought process, anyways.

The Red Wings don't have a lot of room for rookies, as they have a very good compliment of signed veterans, but with the crop of talent they are developing, they will definitely get their shot at a spot in the lineup.  The Red Wings are not without question marks among their veterans, so Landon Ferraro, Anthony Mantha and Dylan Larkin should get some looks.  I don't think all three make it on the team, but their projections are definitely what I think they can bring to the table this season, assuming they get lesser roles.

The safety that comes with picking Red Wings is not lost on the fringe players this year, especially because there is a new coach, one that has likely seen these fringe players in the AHL with the Griffins in Grand Rapids, so there will be a familiarity in some bigger roles, if necessary.  If the Red Wings need to rely on that depth, I'm sure it will be for quality minutes, more so than clutch scoring, but that's more for the coach to decide than for me to speculate.

The Red Wings don't have any key restricted free agents to look after in this off-season, but their cap woes have forced their hand, not to re-sign their rental players, who have hit the free market.  Forward Erik Cole and defenseman Marek Zidlicky, still sit on the available list, having last played for the Red Wings.

Maybe further to the point about having no room for the rookies, with the veterans already signed, they can make a 23-man roster quite comfortably, one that goes a little over the cap ceiling, which will force the team's hand into demoting someone like Joakim Andersson and/or Luke Glendening.

If Datsyuk is on the shelf for over a month to start the season, he could start the year on LTIR, giving some cap relief, while Franzen could be another candidate for the LTIR, making things easier there as well.  The Red Wings are going to start the season with some bit of trouble or another, it'll be interesting to see which one happens.

It was highlighted back in July, as Pavel Datsyuk came out and said that his ankle injury wasn't rehabbing quite as well as he was hoping and he may not be ready to go opening night or possibly not even ready until November.  Currently, the projection above suggests that Datsyuk may miss some time, but he'll still contribute when he returns.
Posted by opiatedsherpa at 1:35 AM