It's amazing what a little help from a capable goaltender can do for a franchise, is it not?

The inclusion of Devan Dubnyk to the Minnesota Wild roster was all the rage at the end of last season and now the trickle down effect will descend upon the hockey pool draft.

What kind of confidence in the Wild does Dubnyk give the poolies of the world?  If he plays as well as he did last year, does that mean the rest of the team will follow suit and give him offensive and defensive support through the year and will the Wild make a return to the playoff picture in the West?  All very interesting questions, but they only begin to get answered at the draft.

The Wild are obviously comfortable with the way this team has been built, as the off-season wasn't really a busy one.  They added a piece in free agent rookie-to-be, defenseman Mike Reilly, and they're prepared to give Ruslan Fedotenko another shot in the NHL.  Very minor moves, but something they can really sink their teeth into, if they're happy with the core group of guys. 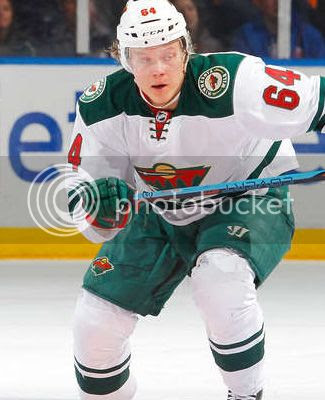 I think there are a lot of us waiting for Mikael Granlund to really break out and use some of that flash and dash we saw of him before he joined the Wild and do it on a consistent basis.

The Wild haven't been a very flashy team, since the days of Marian Gaborik, a way back when, but with a great set of mitts and a confident team on the ice, I think we'll see a few more drives with some great moves from the 23-year old Finn.

Granlund has only topped out at 8 goals for the Wild in his first three seasons, so breaking out has to be on the cards or else his stay in North America may be cut short in a matter of time.

Minnesota is going to need a little bit more offense from one of their prized prospects this year, because it is going to be pretty tough sledding through the Western Conference and teams are going to need more than just a goalie.

If Dubnyk carries on with how he left off last season, he should be a 1st round pick, undoubtedly.  The 29-year old keeper has seen a lot of games in his career and now he's able to put that experience to good use.  Dubnyk was the 7th-best goalie in pool scoring among goalies last season and as quickly as goalies go, he'll go nice and early, one would imagine.

The top end trifecta of Zach Parise, Thomas Vanek and Jason Pominville are a very reliable trio and they'll be good somewhere in the early rounds of the draft.  Mikko Koivu will be hanging around, while young Charlie Coyle and Nino Niederreiter will be there to help chip in, every other night, hopefully.  It's not an overly dynamic forward bunch, but they take their lunch pails to the office and have been able to get the job done on quite a few nights.  I expect much of the same this season.

The defense lines up quite well for the Wild, as Ryan Suter and Jared Spurgeon should be able to lead the way for the club.  There are some pretty good expectations on Marco Scandella, Jonas Brodin and Matt Dumba this year, already adding up to five decent pool defensemen, already on the roster.  They may even have a sixth on his way, as we'll leave him for the rookie race entry below.  Nevertheless, the Wild are going to be good from the back, which could add up to a much better power play this year.

Behind Dubnyk this coming season, the expectation is that Darcy Kuemper is going to be the regular back-up, as Niklas Backstrom's injury problems have added up on him and who's really to know, how effective he'll really be, if he plays at all.  Kuemper will be the guy, but if Dubnyk eats as many minutes as he did last year, anyone who is the back-up in Minnesota may not be a great investment.

Mike Reilly, a 22-year old defenseman, signed on with the Wild after becoming an unrestricted free agent, a non-signed drafted player out of the college ranks and he's coming with some high expectations as well.  The Wild defense is pretty stacked, so if he makes it in, he'll likely have some real upside to capitalize on.  Watch out for him.

The Wild quietly go about their game, which leaves them little fanfare.  This could also mean that they'll fly under the radar a little bit, especially late on.  Justin Fontaine and/or Jason Zucker could end up being decent depth picks for your forwards, if you're desperate late on.

There's nothing overly outstanding left on the market for the Minnesota Wild, as their remaining restricted free agents are not of the key variety, Jonathon Blum headed off to Europe in August.

The Wild have worked their way into being a cap ceiling team, spending some big money on their core players, including Parise, Suter, Vanek, Koivu and now Dubnyk.  Without having added Reilly just yet, the Wild are in with 19 players and $3.9 million left underneath the ceiling.  Throw Reilly in the mix, you take close to $1 million off and you're still going to have to add a couple of forwards to the mix to round out the roster.  Fortunately, the Wild have some cheaper options, giving them some flexibility to their roster.
Posted by opiatedsherpa at 1:15 AM