The New York Islanders have a new home this season, as they move into the Barclay's Center, just over the island from the Nassau Coliseum, less than a 30-mile jaunt.

The Islanders will open their new home with a team that has the makings of being a pretty good one, starting with their big stars.  The face of the franchise, John Tavares, who was in the thick of the scoring race last season, will lead this team as far as it will go.

Overall, this side has some reliable goaltending with their number one, Jaroslav Halak, while the windfall of salary cap crunched defensemen, Johnny Boychuk and Nick Leddy, anchor a defense that has a lot of potential, both in their own end and at the offensive side of the rink.  The forwards are a reasonable mix of skill and speed, with some physicality sprinkled in for flavour, which helps to make this team competitive in a rough & tumble division.

There are a few players that jump out, as being good targets for the hockey pool this year, so I don't think we'll be very short of representation from the island. 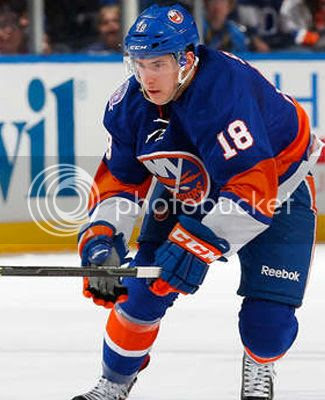 This potentially could be the year for forward Ryan Strome to really make his mark.  He's on the last year of his entry-level deal, he's relied upon for offense in key times and he gets to play with the team's top talent.

I would say that my projection may even be a bit conservative, as the 2011 1st round pick, 5th overall, has some serious upside and if all goes really well for him, he and John Tavares could be a very potent duo.

With Strome, I'm prepared to take him in the 60-point range and I would hope that he comes up big and becomes a bargain pick, possibly in the 3rd or 4th round.

Tavares has already been 1st round material for a number of years already and he'll continue to be, especially after taking Jamie Benn to the wire in the Art Ross Trophy race last season.  If you're not going to take a goalie in the opening round, Tavares is one of the next best options.  If you're going to take a goalie, how about Jaroslav Halak?  Halak ate up a whole bunch of minutes and relished in behind the strong defense, picking up nearly 90 points.  The team hasn't really tinkered too much, so he should be comfortable in the crease again.

There will be some curious eyes on Kyle Okposo, making sure that his breakout year in 2015 wasn't a one-off season, but he'll remain pool worthy, regardless.  Frans Nielsen and Josh Bailey were pretty good support players last season and they could be relied upon to do much of the same in the 2016 season.  At the 35-point mark, we may be getting more into the fringe, but Anders Lee and Michael Grabner should feature this year at some point, we're just not too sure when exactly.

The Islanders defense has a very strong top five and depending on how deep the draft goes, we could easily see all five going in the draft.  Johnny Boychuk, Nick Leddy and Travis Hamonic have enough in the talent department to go among the mid-round players, maybe a bit higher, depending on how desperate everyone gets.  Thomas Hickey and Calvin de Haan could also feature as depth defenders, if you didn't get in on the blueline act early on.

If Halak is going to be a 1st rounder, that doesn't bode well for the new back-up in town, Thomas Greiss, who comes over from Pittsburgh and out from behind another minute hog.  Greiss was decent in his limited time with the Penguins, but unless something drastic happens, it doesn't seem likely that he'll get too many minutes.

I'm not seeing much for entries into this race.  The only rookies on the projection list today are the depth defensemen, who are all vying for the number six and seven spots on the blueline.  The Islanders have some good young talent among the forwards, but there doesn't seem to be much indication that they're ready... yet.  Michael Dal Colle and Josh Ho Sang may get some long looks in camp, but I'm not holding the hopes up too high for them.

There is some depth to this lineup and some that could step up at any time.  I'm generally quite weary of taking Mikhail Grabovski or Nikolai Kulemin, but they have been able to score in their career and they could provide a spark late on.  A kid like Casey Cizikas should be getting closer and closer to being that good depth forward, who picks up some key points in the odd game, so he might be worth gambling on, especially in the mid-season changes.

The Islanders do have one more key free agent left on the books, forward Brock Nelson, who had a really good 2015, likely wants to get paid for 2016 and beyond.  Nelson finished with 42 points in all 82 games and just coming off his entry-level deal, he'll likely be looking to sign something a bit better than a bridge deal.

There is still one buyout on the books, but it was a compliance buyout, as Rick DiPietro isn't costing the Islanders anything for the years and years and years that are left on that buyout.

Currently, I have the roster at 19 players, leaving some spots open for some depth and the Isles still have just under $10 million to play with for those three or four spots.  Everything past the top five on the blueline is up for grabs and that's where the biggest competition will be.
Posted by opiatedsherpa at 12:55 AM