It's been five years since I picked up a copy of the Poolers' Guide from Hockey, The Magazine, and if anything has stayed the same, it is the publications use of colour and its overall flashiness.

When I had last picked it up, it had the feeling that it wasn't very comprehensive, limiting the number of players that it gave projections for.  This time around, it isn't too bad, upping their game to 427 projections (or so), which would be good enough for the 23-team pool we had last season, which topped out at 322 players taken at the draft.

The theme across the projections is wins, which should be no surprise, after the year of the goalie in the 2015 season.  Carey Price tops the Poolers' Guide list, as per my scoring parameters, topping out his projection at 102 points, while Braden Holtby is back in 2nd place, with a 98-point projection.  These two have been 1-2 in my projections, the Hockey News and now these projections.  Could anyone possibly stray away from these guys at the draft in October?

Six of the top 10 players on the list are goalies, to no one's surprise.  Henrik Lundqvist, Pekka Rinne, Jonathan Quick and Ben Bishop round out the list there, in the 3-4-7-10 spots.  Jaroslav Halak, Frederik Andersen, Ryan Miller and Sergei Bobrovsky round out the top 10 goalies overall, all projected to be 1st round picks. 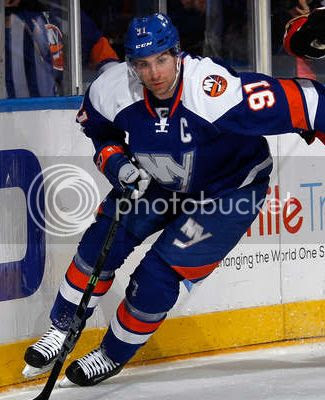 Four forwards rounded out the top 10 in overall projections in this publication, led by John Tavares, expecting him to earn his first Art Ross Trophy this season, coming in at 92 points.  Sidney Crosby, Tyler Seguin and Jamie Benn were also top 10 overall picks, according to these guys.

As for the rest of the top 10 forwards, Evgeni Malkin, Alex Ovechkin, Nicklas Backstrom, Taylor Hall, Patrick Kane and Steven Stamkos round out the list.  That's a very high-powered top 10, so if you're not going to pick up a goalie in the 1st round, you should make up the difference with a pretty decent forward, at the very least.

On defense, it's looking very similar to the previous projections we've seen thus far.  Erik Karlsson leads the pack, this time, with 72 points, followed again by P.K. Subban, at 63 points.  Brent Burns, Roman Josi, Tyson Barrie, Mark Giordano, John Carlson, Victor Hedman, Kristopher Letang and Dustin Byfuglien.  I think once the pool hits the late 2nd round, early 3rd round, it's going to be a race for these guys and rightfully so.

The rookie class in this year's edition isn't very deep and it starts the same as most lists will, with Connor McDavid on top.  The 2015 1st overall pick comes in with 72 points in this guide, which has him tied for 30th in points, dropping him into the 2nd round of the draft around there.  The interesting note on the rookies is that Jack Eichel isn't in behind McDavid, rather he ranks 4th, behind both Nikolaj Ehlers and Sam Bennett in the rookie race.

In total, I only count 14 rookies in these projections, which would only give better than half of our pool teams a rookie, if they all wanted one.

One of the cool parts about this magazine, is that it does have a 3-page wide pull-out, which would give you a good stack of names, right in front of your face, without having to flip over a bunch of pages.
Posted by opiatedsherpa at 10:47 AM