With things picking up around the office this past week, it has been a little tougher to get the news out in a reasonable time, if at all, hence why the Newsletter is running a bit late today.  It might be a bit of a condensed version of the Newsletter, just because of that.

This week, it was pretty well a tie for the Player of the Week nod, as we had a couple of goalies finish the week with a 3-0-0 record with a shutout, but since one was going to be the headline player for our Mover & Shaker, I thought it would be good enough to spread the wealth a little bit and offer up the Player of the Week to the team that wasn't going to get a nod otherwise.

Henrik Lundqvist had a great week with the New York Rangers in Week Four, shutting out the Blues on Tuesday, beating the Oilers on Thursday and then getting the second half of the team's back-to-back nights, defeating the Jets on Sunday.

No complaints for Grant, I'm sure.  Grant picked up the Rangers' number one goalie with the 16th overall pick and now, with his big week in the books, he now has 17 points on the year and is now ranked 3rd overall in pool scoring.  He's already become a bit of a bargain.

It was another week where the lack of separation in the standings made another week look amazing.  Marcin's team had a very good week, racking up a whopping 36 points and moved up from 13th place, all the way up to 2nd place!  That's a pretty good week, I'd say. 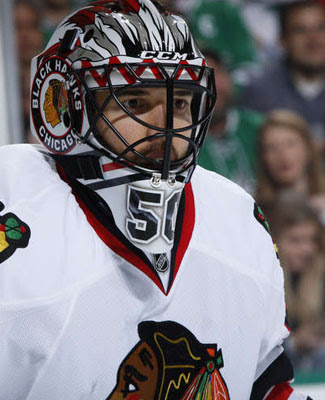 Yes, Marcin's number one goalie was one of the qualified goalies for the Player of the Week in Corey Crawford, who also finished with a 3-0-0 record with a shutout under his belt.  The Blackhawks are starting to roll again this season and Marcin is taking full advantage, Crawford being his 1st round pick and then he added a top line player as well in Artem Anisimov, who finished with 6 points in the week as well.  Those two players, combining for 14 points in the week, were better than or equal to three teams in the pool alone.

Then when you also add Ryan Getzlaf of the Ducks and Nick Holden of the Rangers, each potting 4 points of their own, Craig Smith of the Predators, Henrik Zetterberg of the Red Wings and Kevin Klein of the Rangers with 3 points each, he comes away like a bandit in the weekly scoring, indeed.

Marcin's team, if it was a mini-game, would be running away with the plus/minus in the pool, as his players are on in a lot of scoring situations, leading the pool with a combined +42 rating, a full 25 points better than any other team in the pool.  He could be in line for a big pay day, if his players continue to be in positive situations through the year.

With only 2 points between his team and 1st place, another big week could mean a big lead by the end of next week.

In the basement this week, Wes returns after a tough season last year and his luck hasn't seemed to get any better at the start of this season either.  In Week Four, his team finished with only 12 points and has dropped down to 24th in the standings.

With Cody Eakin of the Stars starting the year on the IR, Ryan Pulock getting recalled by the Islanders and suffering a broken foot right away and now, just recently, an upper-body injury to Jonathan Drouin in Tampa Bay, his team has not been lucky at all.

His biggest plus in Week Four was Coyotes goalie, Louis Domingue, who finished with 4 points on the week and is starting to find his game in the desert.

We're now a few weeks away from the Waiver Draft and will Wes look for his money back again?  His team will need some help in the PIM pool department, sitting in 24th, 93 minutes back, his team has been eliminated from the survivor pool, but the outdoor game pool is still wide open with three more games in the New Year.  He may want to make sure he's picking outdoor bound players... just a thought!

I have been meaning to write that prizes post all week, but time generally works against me during the day and the evening's activities, which include sports and beers, aren't really helping too much either.  So, how about I talk about the money here and get it over with?

Well, not only will our 1st place winner get their name on the trophy, 1st prize will be a solid $750 this year, 2nd place will be $300 and 3rd place will be $120.  We'll still have the three mini-game prizes, where people will get their money back and the rest went to the website costs and engraving on the trophy.  That's it.  That's the whole shebang.  Now you know.

This week's goon squad belongs to Kristy & Don, as it finished with 54 minutes in penalties in Week Four and took the outright lead from Marcie, 123-121.

Just how big of goons were they this week?  Their 54 minutes were greater than the four weeks combined of six teams in the pool.  Such a dirty team.  That Nazem Kadri more than anyone.

Brenda & Seward, Cam and Ryan all fell out of the survivor pool, all thanks to a lack of wins in Week Four, leaving us with 10 teams in the pool.  Now, three of those 10 teams were only able to snag a single win in Week Four... could they be in trouble next?  What about these supposed bye weeks that are upcoming for each NHL team?  Are these teams properly equipped to handle the schedule?  Stay tuned!

Well, on the plus side, the pool saw some more participation in Week Four, as the average number of games played by skaters and minutes played by pool goalies were up, if only marginally, but scoring continues to tail off.  It wasn't nearly as drastic as a point per NHL game on the schedule, no, we're down from 11.34 to 11.2, which is still a pretty good total.  We also saw a spike back up in the penalty minutes, up from 7.5 to 10.7 this week, which is good news for those goon teams.

It sounds like we have some more significant injuries coming up, so we could be hurting again right away.  Let's hope our healthy players start picking up the slack.

The Carolina Hurricanes are still waiting to hear how long they might be without defenseman Justin Faulk, who left Sunday night's game against the Devils with an undisclosed injury. Faulk left the game in the 1st period, not to return and there was no update after the game and we're still without one on Monday afternoon, but I would imagine that one would come soon.

Eric's team was able to move out of the basement of the pool in the week, but this injury will likely hurt him in the long run, if it is a long-term injury.  6 points in 11 games is decent enough production to lose out on and that isn't even his peak performance level either.

The Columbus Blue Jackets announced on Monday afternoon that defenseman Seth Jones is now expected to miss the next three weeks worth of action to a hairline fracture in his foot.  Jones played all the way through overtime against the St. Louis Blues on Saturday night, which may not have helped too much, but he also likely didn't take off his skate to find out how bad he was hurting during the game either.

A tough blow to Stacey M.'s team, which fell down in the standings in the week, down from 19th to 21st.  Jones has 6 points in his first 10 games this season, which is a pretty decent start from the blueline.

The Detroit Red Wings had to do some much-needed paperwork on Monday, but it isn't great news for the hockey pool.  Thomas Vanek has now been moved to the Long Term Injured Reserve on Monday, retroactive to the 25th of October, which means he'll need to miss at least 10 games, but he has already missed six games to the injury, so the minimum is only four left to go.  The Red Wings were so tight to the salary cap ceiling, that they needed the relief from the LTIR to bring up Tyler Bertuzzi on Monday, who is a cheap cap hit as a replacement.

Vanek's projected games were already off Kristy & Don's team of goons and they will be without him for at least another week, possibly more, but the Red Wings will at least operate with a bit more flexibility.  The duo dropped down to 17th in the standings, 23 points out of 1st place.

A lower-body injury was the reason why Jesse Puljujarvi was out of the Oilers lineup yesterday evening against the Red Wings and he is currently listed as out day-to-day.  It's hard to say whether or not this injury is a recurring injury, like the one he had going on in the preseason, but it is something to keep an eye on.

The Oilers' 1st round pick this year is the only rookie representation on Mike's pool team, but that isn't a mini-game, so it isn't quite the biggest deal.  Puljujarvi hasn't exactly been the best freshman this season, scoring only 3 points in his first 10 games.
Posted by opiatedsherpa at 2:29 PM