We're here!  The Waiver Draft is upon us, so now that we have the order set for the start of proceedings today, please feel free to tell your teams that they can start scoring again.

So, we'll draft, starting today, and then we will see everyone go live on Monday in Week Nine.

First things first though... let's get through the review of Week Seven.

The story of the season could very well be the the strength that Craig Anderson has been showing in a very trying time and how much it has impacted his game, in such a positive way.  It has been nothing short of amazing that anyone could be playing so well, in a position that already has a microscope on it all of the time, under the enormous weight of the family situation at home.  In Week Seven, the 35-year old keeper brought it all to the forefront with a top notch week.

Anderson was the best player in the pool, picking up a 4-0-0 record with a shutout, earning 10 points and was the clear winner of the Player of the Week nod.  Wins against Montreal, Boston, Carolina and shutting out the Rangers on back-to-back nights made it a very impressive week.

The 10 points now brings his season total up to 30 points, which is good enough for a tie for 2nd place in pool scoring, but falls to 3rd place on the wins tie-breaker.

Wilton has found himself a pretty good bargain, as he picked him early in the 2nd round of the draft, already up 25 spots, a whole round, from where he was taken in October.

And of course, like it has happened twice before already this season, the Player of the Week has aided the best team in the weekly scoring, giving Wilton the Mover & Shaker for Week Seven as well.  On the strength of Wilton's best goalie, his team finished with a weekly-high of 33 points and he shook his way up the standings, from 15th to 7th.  A very solid jump, but his team also lost eight spots in the Waiver Draft final order, but I'm sure he would make that trade off. 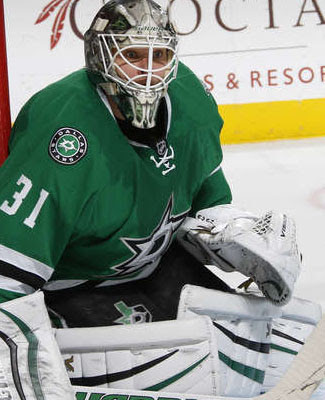 Wilton's team was fairly solid, from top to bottom, which may suggest that there are very few changes upcoming for his team this week.  Antti Niemi of the Stars was his next best player in the week, finishing with 4 points, while Corey Perry of the Ducks, Mikko Rantanen of the Avalanche and Jake Muzzin of the Kings all finished with 3 points in Week Seven.

There were only two players on his team that was unable to finish with any points and only one of those was injury-related, so almost everyone on the ice was contributing, one way or another.

Moving up in the standings is the key part of the story, as his team moved into the top 10, finishing in there for the first time this season.  His previous peak position on a Monday morning was 11th and now he's likely got his eye on the money spots.  As of Monday morning, his team is only 11 points behind 3rd and his team had already made up 13 points on the position in Week Seven.

Making a key improvement or two in the Waiver Draft, getting Jonathan Toews back from injury and hopes that Craig Anderson doesn't have to leave the team any time soon would be his three keys moving forward.  No one has been able to string together two back-to-back Mover & Shakers yet, now would be a great time for that for Wilton.

It was a pretty good race for the 1st overall pick in the Week Eight Waiver Draft... until Week Seven rolled around.  Troy's team really put their stamp on it, picking up a week-low of 15 points and dropping below Wes, to 25th place in the standings.

Troy's goaltending, which has been carrying him, as best they can, only managed a single win in the week, as he told them he'd find them help to get their money back.  Sam Reinhart of the Sabres and T.J. Brodie of the Flames didn't quite get the memo, as they finished with 3 points to lead the way for his team in weekly scoring.

So, now Troy has to decide in which direction he wants to go with his picks... does he goon it up?  His team is 19th this week, 78 minutes back.  His team is still in the survivor pool... will he opt for Peter Budaj?  The outdoor game pool is still wide open... does he need any more representation for that one?  Didn't think of that one, did you?

Brian held the lead for only one Newsletter, with Benson taking it back in Week Seven, trying to start a new streak.  This also means that, when the Waiver Draft gets to these two teams, Brian has a shot at a better player, looking to improve his way into 1st place again.

Marcin finished his second week in 3rd place and he's seemingly getting comfortable there.  7 points back of 2nd place and 6 points up on 4th place, getting quite the buffer zone.  Scott lost a few points on him in the week, while Marcie gained a bunch on both teams, as did John S. and our Mover & Shaker, so things are looking competitive at the top again.

Thanks to a bit of an outburst from Calgary's Matthew Tkachuk, Derek B. earned the title of goon team of the week, finishing with 36 minutes in penalties.  This moved Tkachuk into 2nd place into the active players list of penalty minute takers, bringing his total up to 45.  This is the week, however, where that all changes and we add a few goons to the mix and make this pool more interesting.

Kristy & Don still lead the overall race and they might be looking for help, as their lead over Marcie's team is only 1 minute.  These two teams do have a buffer of their own, as Marcie's team is 23 minutes ahead of Grant's and she's also in the big money race, so I can't see her team staying in this race for too much longer.

The survivor pool did go down to the wire for Troy's and Dale C.'s teams and it couldn't have been much better, as their teams went head-to-head in one of the early games on Sunday afternoon.  In the end, Tuukka Rask did the job for Troy and the Bruins, earning the 4-1 win, thus eliminating Ben Bishop and Dale's team from contention and this mini-game is now down to eight teams.

After the pool dug itself a nice hole in the plus/minus department, dropping down to a combined -95 from all of our forwards and defensemen in Week Four, the pool has picked up its socks and has now climbed up to -19 as a whole.  Scoring 5-on-5 must have really gotten a boost over the last few weeks and most teams are quite happy about that.  Marcin's team leads the way in plus/minus with a combined rating of +54, which is better than Cam and Dale C.'s teams, which are both +24.

The overall scope of the week was quite positive, as players were returning from injury and starting to score a bit too.  In 52 NHL games on the schedule, the pool scored an average of 11.13 points per game, way up over Week Six, thanks to skater games going up and goalie minutes up as well.

We also had the 4th-best week in penalty minutes on average, up to 8.1 PIM per NHL game, which is bound to go up, when Week Nine kicks off.  Oh yes, that'll be good.

On Sunday night, the Carolina Hurricanes lost the services of forward Jordan Staal against the Florida Panthers, as he left the game and didn't return.  Staal only managed to play in four minutes worth of action, leaving in the 1st period, but there were no more details after the game.

For Marcin, Staal hasn't been one of his biggest contributors this season, only 9 points in 21 games, but he has contributed to his 3rd place standing, heading into the new week.  It only looks like he has to make one move and it isn't a forward that he's moving.

This one flew under the radar at the end of the week, but Semyon Varlamov missed a start on Saturday night against the Canucks, due to an upper-body injury.  This is supposed to be a day-to-day injury and it does appear to be that it should be the case, as they recalled Spencer Martin for the game and sent him back on Sunday.  There has been no indication one way or the other, but it couldn't possibly be all that surprising if Calvin Pickard gets one more start, before Varlamov is back to 100% health.

There are some rumblings that Kristy & Don may go all-in on the penalty minute front, so they may leave their injury-riddled goaltending alone and concentrate on the goons, one way or another.  Last season, they almost got some money back, thanks to another team going the way of the goon, so this year, they might take advantage of their early lead.
Posted by opiatedsherpa at 10:43 AM