We're now six weeks into the season and I don't know about you, but I'm dying for the Waiver Draft to happen.  The plus side, this upcoming week is the week where we decide the draft order for Week Eight's Waiver Draft and then Week Nine will be the week that those picks go live.  Stay tuned in the next day or so, I will do up the mock draft and go over the new wrinkle rule that needed to be put in after last year's mini-game fiasco.  Let's move onto the review of last week, shall we?

It wasn't a great week for scoring in the pool and it showed with the best players, as there were a few that finished with a mere 8 points, locked in a tie that needed breaking.  Four players all finished with 8 points a piece, but the tie was broken easily, as three out of the four players were goaltenders, so all Nicklas Backstrom of the Capitals had to do was score a single goal and it was all his.

In four games during the week, Backstrom finished with 4 goals and 4 assists, easily taking the title of Player of the Week from the three goalies.  The highlight of the week came from his Wednesday performance, 2 goals and 3 assists on rivalry night against the Pittsburgh Penguins.

Overall, Backstrom now sits with 5 goals and 17 points in 18 games, which has him ranked 32nd in pool scoring.  That would rank him good for a 2nd round pick in this year's draft, if we were to redo it, and that's about where Backstrom was taken, so Ryan has been getting a good return for his player on his proxy team.

Speaking of Ryan's proxy team, it was en fuego in Week Six, picking up 32 points from Monday to Friday and moving his way up to 8th place in the standings from 19th.  The lack of scoring throughout the standings certainly facilitated the huge jump, as a lot of teams were not able to capitalize on their chances. 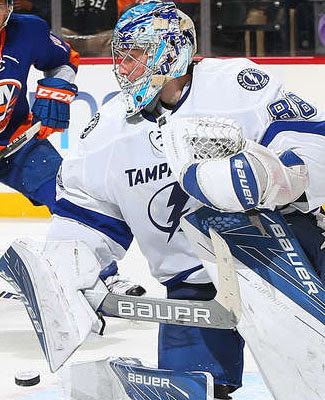 Not only did Ryan have the Player of the Week, he also had one of the three goalies that were vying for the title in Tampa Bay's Andrei Vasilevskiy, who posted a pair of shutouts in the week.

Vladislav Namestnikov of the Lightning and Mats Zuccarello of the Rangers were also good for 4 points each, while Dougie Hamilton of the Flames had 3 points.  There was a lot of concentrated scoring on Ryan's team this past week, which certainly made up for the six players with no points on his side.  If I had to guess, this would likely be a record for the number of zeroes on a Mover & Shaker team ever in the pool.  Sadly, there is no historical data on that.

One of those great indicator stats that I have, which I thought was going to be a mini-game this season, was the plus/minus statistic.  His team was a combined +11 in the week, showing that his players were on the ice for some positive 5-on-5 scoring for the most part.  I can tell that it is a lot of 5-on-5 scoring, since his team hasn't really produced much in the way of shorthanded scoring, no points, in fact.

It was a rough week again for Wes' team, as it finished with only 10 points in total and now sits with a 5-point gap to 24th place, down in 25th.  This is already his second time in the Basement Dweller paragraphs of the Newsletter and he might have to make a repeat appearance in the PIM pool.

Jonathan Drouin of the Lightning, Ben Hutton of the Canucks and Erik Johnson of the Avalanche were his three best players, coming up with 2 points each.  There were a few drips and drabs of points throughout his lineup, but a big zero from the crease was one of the places that hurt him the most.  The rough streak for the Sharks this week and Mike Smith returning to the crease for the Coyotes were quite painful.

On the plus side, Cody Eakin returned and he still needs time to find his scoring hands, while Drouin survived a scare this week.  Bobby Ryan could be back from the upper-body injury he suffered late in the week, but he's still missing Ryan Pulock, who might be getting closer to health, but is still a target for the AHL.

Brian managed to take over 1st place in the standings and he had a good lead at a few points, but Benson managed to keep the gap nice and tight for the end of the week, as they are only separated by 1 point on Monday morning.

Marcin jumped back over Scott in the week for the final money spot and he'll start with a 3-point lead, while sitting 5 points back of Benson for 2nd place.  It's still a very tight race and if a team down below had a great Mover & Shaker week, they would be right back in the mix for the money as well.  No one is really running away with it yet.

Brian & Grant each shared the title for the biggest goon teams in the week, each posting 22 PIM in Week Six.  Brian's team is in 4th in the overall standings, but I can't imagine he'll be making the move to goon things up at the Waiver Draft, while Grant sits in 7th, 36 minutes back, and is in the bottom half of the standings, but I can't see him really considering it at the moment.

Kristy & Don still lead the mini-game standings, now with 156 minutes in penalties, while Marcie trails with 147.  The duo may consider the move next week, since their goaltending has been shot to hell, while Marcie's team could use a bit of tinkering in the scoring department and could still be in the mix for the overall race.

It's the first week of the regular season where we didn't see an elimination in the goalie survivor pool.  One of the pool favourites, Troy, managed to qualify on Saturday night, becoming the 9th and last team to do so in Week Six.

Over the next three weeks, it will be tough to find some eliminations, as the schedule is very heavy, in terms of games to be played.  This past week was only 47 games, where next week will be 52 games and we'll be over 50 until Week Ten.

Now that the bodies are dropping like flies in the league, a lot of them being big scorers as well, the numbers are truly dwindling and it is harder and harder to bleed points out of these NHL games.  The pool dropped another half a point on average from an NHL game in Week Six, down from 11.06 points to 10.43, so better than half a point.  I don't think it's going to get much better.

On the plus side, the penalty minutes were up and they'll start to climb again, especially in Week Nine, when a goon or two are taken.

It looked like a real possibility after another scratch on Saturday night and on Sunday, it was made into a reality, as the Arizona Coyotes have decided to send Dylan Strome back to the Erie Otters of the OHL, where he will spend the rest of the year, until the Otters are out of the playoffs, when he is then eligible to return to the NHL, if needed.

With only 1 point in seven games, he wasn't much help to John S.'s team, despite being one of the league's top prospects.  He just wasn't able to stick with the starting lineup and spent most of his time in the press box as a scratch.

The Dallas Stars have officially placed defenseman Johnny Oduya on the Injured Reserve on Sunday, retroactive to Saturday night's game against the Oilers, where he suffered a lower-body injury.  There was no indication of the severity of the injury, but his placement on the IR would give him a minimum of a week off, eligible to return next weekend, but it remains to be seen if he will.  The Stars recalled both Esa Lindell and Julius Honka from the AHL to help fill the gap.

For Derek B., his defense is ranked 11th in the pool with 28 points and Oduya has been good for 5 points this season.  If this is a significant injury, it certainly hurts the strongest part of his team this season.

On Monday morning, the Pittsburgh Penguins placed forward Chris Kunitz on the Injured Reserve,  as whatever he was dealing with, likely in the lower-body, was serious enough that he needs some time off to recover.  He was put into the blog over the weekend, but ended up playing, which may have been a mistake.  Anyways, he will be on the shelf for at least a week and hopefully, by then, he'll have a better idea of when he'll be able to return.

Not good news for Cam, who is a good week from climbing into a money spot and setting up camp.  He'll open the new week in 5th place, 10 points out of 3rd.  Kunitz has been productive too, picking up 11 points in 18 games, so he'll definitely be missed.
Posted by opiatedsherpa at 12:58 PM