In a pretty good scoring week, we had three players finish up with 8 points a piece, leading the way in pool scoring.  Two out of the three, however, were goalies, which left our only skater to take the crown, since all it would take is a goal scored to take the title away from the keepers.

Jason Pominville of the Minnesota Wild was tops this week, finishing with 2 goals and 6 assists in four games played, extending his points streak to five games in the week as well.  Pominville had his only 2 goals early on in the week against the Jets, where he also added a pair of helpers for a 4-point game.  An assist against the Blackhawks on Wednesday, followed by another assist on Friday against the Lightning, capped off by a pair of helpers against the Red Wings on Sunday made up his 8-point week, waiting to the last day of the week to capture the honour.

This isn't the first time that Pominville earned the nod, as his first tap came back in Week Five of the 2014 season, when Dale B. coincidentally picked him that year as well, so there is something to be said about the Minnesota forward on Dale's team.  Dale has done well with Pominville, collecting 35 points in 55 games, helping to stay tight in the money race, 8 points back of 1st place to finish the week.

It has been a pretty good year for big leaps in the standings, thanks to some Mover & Shaker weeks and Week Eighteen has been no different, as the proxy team that belongs to Ryan has made leaps and bounds this past week, after a 34-point effort. 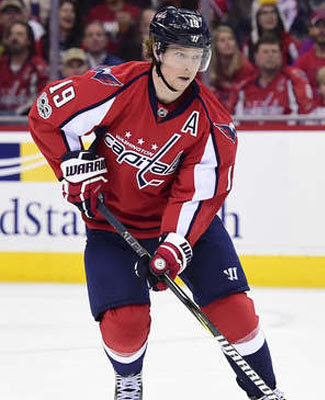 When the first Waiver Draft concluded, Ryan's team was down in 14th place, but has since made some significant gains, with a couple of bumps along the way, but this Mover & Shaker has now lifted him into a share of 3rd place, but doesn't have a tie-breaker to his name, so his team has finished 4th place in the week, officially, but needs 1 point to move up.

Ryan's forwards were carrying the load for his team this week, as his defensemen and goalies combined for 3 of his 34 points in the week, which isn't much.  Nicklas Backstrom of the Capitals led the way with 7 points, followed by Max Pacioretty of the Canadiens with 6 points, Richard Panik of the Blackhawks with 5 points and David Pastrnak of the Bruins with 4 points.

The move to 4th wasn't a huge leap, as he was 6th after Week Seventeen, but he did get a couple of points from one of his latest pick-ups, Brian Gionta of the Sabres.  Now, his team, along with Brenda & Seward's, are only 14 points back of 2nd place, which we now have eight weeks left to sort that out.

Back to Ryan's forwards... they have been carrying him all season long, as his group leads the pool with 328 points, to date, which is 23 points better than any other group in the pool.  His defense ranks 22nd and his goalies are 21st, yet his team sits in 4th place, right in the thick of the money.  Sometimes, going all in up front can really go a long ways.

We could be seeing a whole lot of Troy in the Basement Dweller down the stretch, as he went and dumped a bunch of injuries and bums to goon up, which means that scoring might be limited in most of the weeks leading up to the end of the year.  It might actually be worth measuring against Troy's team, in scoring, to how bad of a week you may have had, if you finish below his team in a week.

This past week, Troy's team finished with 12 points, thanks to goalie Tuukka Rask of the Bruins, who finished with 6 points, while Sam Reinhart of the Sabres had 4 points, making up the better part of his weekly total in two slots.  This is what you're up against, people!

Did his goons even produce in the week?  No.  They were only good for 17 minutes in penalties, well below the weekly leader, which we'll touch on in a couple sections below.

Brian is streaking at the top of the standings again, as this is his third straight Newsletter atop the standings, but his lead was shaved down a little bit by Dale B., which we've seen already, down to 8 points.  Brian's team has the tie-breakers in both goals and wins, so Dale will need to win outright, at this point, unless, in the next eight weeks, his team starts lighting the lamp or goes on a massive winning streak.

3rd place is now being contested by Brenda & Seward and our Mover & Shaker, Ryan, as they finish the week tied, 14 points back of 2nd place.  Marcie moved up to 5th place, 4 points back of 3rd, trailed by 1 point by Stacey C. and another 3 points back is both Cam and Jeremy.  That's a pretty good spread of points, a Mover & Shaker week away from anyone moving into the money in that group.

The goon team of the week belongs to Eric, who had a whopping 50 minutes in penalties in Week Eighteen.  This lifted his team up to 3rd place in the PIM pool, now 53 minutes back of Marcie's team.  Eric's team made up 26 minutes on our leader in the week, so there is still a race left to go in this one.

Kristy & Don sit in the middle of the two teams, 31 back of Marcie and 22 up on Eric, but they have lost one of their hired goons to injury in the week, which will hurt their chances down the road.

Hopefully in the next weeks, we get a little more life out of this pool.

Both John S. and Stacey M. were both free and clear early on in Week Eighteen, so there was no real need for many of the goalie announcement posts through the week.  Just in case you were wondering.  There has been no real change to the dynamic of either team in the last week either.  Devan Dubnyk continues to carry the load for John, while Pekka Rinne does the dirty work for Stacey's team.

Week Nineteen is scheduled to have 46 NHL games, so there should be ample opportunity for both teams to get their wins.

The Detroit Red Wings were again without forward Thomas Vanek on Sunday afternoon, when they were in Minnesota to visit the Wild. An ankle injury was to blame for his absence this time around, as Vanek has already missed time this year to a groin/hip injury and another lower-body injury for a combined 12 games, previous to Sunday's game.

More bad news for Kristy & Don, as they try and get back to a respectable standing, while completely ignoring that they have a team full of goons.  Whatever floats their boat, I guess.  They still had a pretty good week, with 32 points, but this injury will hurt them, if it of any sort of term.

Also in that game between the Red Wings and the Wild, Minnesota scratched defenseman Matt Dumba for the game, due to a lower-body injury of his own.  There wasn't much for details on the injury, but he is listed as day-to-day, which isn't too bad.  No word on how much time he is expected to miss going forward, but something we'll keep an eye on.

Dumba has been Troy's biggest contributor to the PIM pool from the blueline, with 43 minutes this season, so this injury, if it extends for very long, could hinder his chances of possibly making up that huge gap to top spot.

On Sunday, the Nashville Predators activated forward Harry Zolnierczyk from the IR and then placed Cody McLeod on it to make room for it, as the ruffian is dealing with a lower-body injury.  McLeod's placement, likely retroactive to a game earlier in the week, will mean he'll miss a week from that game.  According to some reports, he is considered to be day-to-day, so when he's eligible to come off the IR, there's a pretty good chance that he will.

Troy has already collected 4 PIM in three games from the tough guy, but that is far from where he needs his newly hired gun to be.  That gap needs to close much faster, but his team is falling further behind instead.
Posted by opiatedsherpa at 11:25 AM