This was an excellent week for scoring forwards, as there were three players that could have won the Player of the Week nod in most weeks this season, but only one stood above them.  Filip Forsberg has a week for the ages, finishing off with 10 points, thanks, in part, to a pair of hat-tricks.  Jonathan Toews of the Blackhawks had 9 points and Johnny Gaudreau of the Flames had 8 points this week, both finishing a shade short of the Predators forward, just to show how good this week was.

The 10-point week now brings his totals up to 24 goals and 46 points in 62 games with the Predators, which has him ranked 56th in pool scoring, as of Monday morning, an early 3rd round pick, if the draft was redone today.

Wes is getting good value for his pick, having taken him with the 61st overall pick in the 3rd round in this year's draft, it is really working out in his favour, one of the few picks that have worked in his favour this year.

It was a runaway win for Eric and his team in the Mover & Shaker race in Week Twenty.  Eric's team was the only one that topped the 30-point mark in the week, finishing with 33 points and his team saw a very promising gain, moving up from 10th to 6th in the process.  The big week means he slides his way into the money conversation, but his team still sits 19 points back of the money, but he's much closer than he was a week ago. 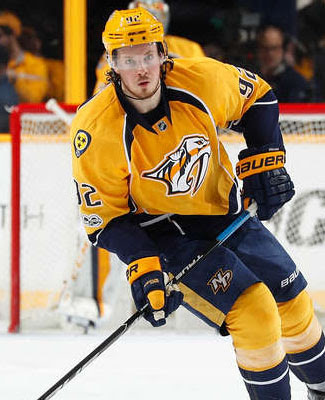 Eric's investment into the Nashville Predators really paid off in the week, as Ryan Johansen led the way with 7 points in the week, while both Viktor Arvidsson and P.K. Subban each had 5 points.  All three were taking advantage of the hot streak of the Player of the Week above.

Justin Williams of the Capitals picked up 4 points in the week and Jamie Benn of the Stars had 3 points, rounding out his notable producers in the week.

The move to 6th place is a new peak position for Eric's team, which has spent some time in 25th place this season, way back in Week Three, so there is always some hope that your pool team can turn things around through the Waiver Draft and being patient with your team, as hard as that seems.

At the end of the first segment of the season, Eric's team was ranked 20th, but was ranked 9th in the second segment, pushing his team up to 12th overall and now, in this third segment, his team is 2nd in the last three weeks, which has been good enough to bump him up those last six spots.  Can his team find its way up to the money?

Troy has some company down in the basement this week, as Grant's team was tied for the dweller nod this week, with 11 points, but did Grant's team score enough goals to stay out of the honour?

Nope.  Actually, we'll have to go to the second tie-breaker... wins.  Both teams finished with 3 goals in the week, tied with two other teams for the least amount of lamps lit in the week.  And in the win department, Troy had a win from Tuukka Rask and Grant had a win from Henrik Lundqvist.

Well, this looks like a joint Basement Dweller nod... unless, I can find something else to base this on.  According to my own player rankings, I use games played as the next tie-breaker, so the team with the fewest games played in the week from their skaters... they'll be the Basement Dweller.

And with a difference of 24 games to 21, Grant will find his way to the bottom of the standings, earning the Basement Dweller nod, yanking it away from the bloodied goon hands of Troy's team.

Grant can thank Dennis Wideman's time in the press box and a couple of his players having their 5-day mandatory break in Week Twenty for the honour.

Dale B. increased his overall lead to 4 points, as his team outscored Brian's by a couple points in Week Twenty.  Both teams, however, both dropped points to Marcie's 3rd place team, as her team was 4 points better than Dale's in the week and she sees the gap shrink to only 6 points to Brian's team to start Week Twenty-One.

Stacey C. and Brenda & Seward both dropped points to Marcie's team as well and the gap to the money is getting bigger and bigger as the weeks go by.

There's something about being the Mover & Shaker team and being the goon team of the week, I'm seeing lately.  Eric's team was also their pugilistic best to move up the standings in the PIM pool in Week Twenty as well, topping out at 27 minutes, but Marcie's team was still pretty good, at 26 minutes.  Eric's team is now trailing Kristy & Don by 7 minutes, which is becoming more of a technicality than an obstacle.

Troy's team finished with 25 minutes and is now 21 minutes out of the top five, but he needs some real rage through his squad to make up the gap to 1st place.

The goalie survivor pool didn't quite make it to the weekend for elevated anxiety levels.  Both Stacey M. and John S. survived the week and that was going to be the toughest week on the third segment's schedule, as we made it through a pretty weak portion of the NHL schedule, with only 39 games played.  The schedule ramps back up to 50 games, so there will be lots of games and likely lots of starting chances for both of their goalies, there is a fine chance that they might split the pot in the end.

The first mini-game to be decided is the outdoor games pool, to which Marcie's 6 points was tops, thanks to the Heritage Classic game, where her goalie, Cam Talbot, posted a shutout to help lead the way.  No matter which way you sliced it this season, it seemed like her team was destined for at least one prize and there are still some more prizes to claim.  You can see her team's name across the board in the Newsletter already, so there's still potential in there for more money.

The Blackhawks likely had Corey Crawford penciled in to start against the Blues yesterday, like we did on the blog, but the Chicago number one came down with that ugly flu bug and that nixed his start in a hurry, leaving Scott Darling to fill in and it was a race to try and get Lars Johansson in to back-up, as the AHL affiliate was on the other side of the country.

Marcin's team was in the hunt for the money once upon a time this season, but injuries really mounted on his team and now his team is stuck in the middle of the standings, with not much else to play for.  We have six weeks left and his team is 47 points back of the money.  Cue the comeback?

The New York Islanders could be getting a boost to their blueline this week, as it is expected that defenseman Travis Hamonic will return to practice today and that could mean he'll be working his way back to game shape and help the islanders try and reach the playoffs down the stretch. Hamonic has been on the shelf since the beginning of January with a lower-body issue and has missed a big stretch of time.

With 12 points in 35 games for the Islanders, he hasn't been a big offensive producer, when healthy, but anything is better than nothing for Ryan, who opens the week in 7th, only 23 points back of the money.

A note for tonight's game for the New Jersey Devils, as they could very well be without forward PA Parenteau against the Canadiens, as he suffered a finger/hand injury blocking a shot against the Rangers and his now questionable, at best.  If he doesn't play tonight, he'll be listed as day-to-day.

Tony's 24th place team continues to take a kicking in the injury department.  I think his team is doomed to not be in last place, but second-to-last.
Posted by opiatedsherpa at 10:34 AM