Amidst a retooling or rebuilding time for the Buffalo Sabres, there is some expectations that the team is going to finally take steps in the right direction and many thought they had in the 2016 off-season, leading up to the 2017 regular season.  But a late preseason high ankle sprain for the team's franchise player, Jack Eichel, and the whole plan was thrown into disarray, since he wasn't able to return until the end of November, pretty well two months into the regular season.

Eichel's injury was just the tip of the iceberg for the Sabres, as they suffered through injury problems for the better part of the season, especially on the blueline, where they were not able to keep key players healthy for extended periods of time.  Cody Franson, Zach Bogosian and Josh Gorges all spent considerable time on the shelf, which really took the cohesiveness away from the team and their results suffered for it.

All in all, the Sabres finished second-to-last in the Eastern Conference, well below their own expectations and that meant some heads had to roll, as the management team and coaching staff were all let go on April 20th, leaving Tim Murray and Dan Bylsma out in the cold for the poor season. 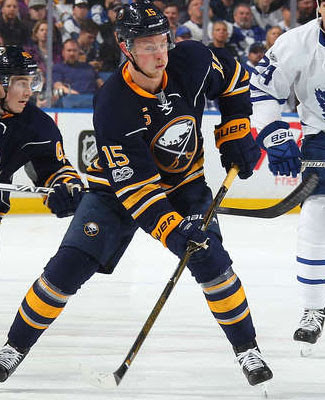 If the number of pool picks at the draft is any indication of expectations for a season, then the Buffalo Sabres were also disappointing there too, as 13 Sabres were taken at the initial draft, the first one being Robin Lehner, taken 50th, the last pick of the 2nd round.  After that, the wheels fell off pretty quickly, as the first Waiver Draft was three drops to no pick-ups, while the second time around was one drop and one pick.  No key Sabres were dealt at the deadline, so they finished with 10 picks active in the pool by the end of the season.

Eichel was a 3rd round pick this year, taken 55th overall, and his high ankle sprain did him in, as he was only able to play in 61 games in the season, limiting him to 24 goals and 57 points and he finished 73rd overall in pool scoring.  It's still a respectable number, given the injury, and I think it's fair to say that he's coming along quite nicely in his career projections.  Now, if the team around him can improve too, he'll be a great pool pick-up before too long.

Including Eichel, the Sabres had seven forwards in the pool worthiness conversation (top 200), as Ryan O'Reilly, Sam Reinhart, Kyle Okposo, Evander Kane, Brian Gionta and Matt Moulson were also able to get the nod in pool scoring this year, suggesting their scoring depth wasn't too bad.  Injuries hurt their blueline, leaving only three blueliners in the top 100 there: Rasmus Ristolainen, Jake McCabe and Cody Franson.  The top two goalies for the Sabres were also able to sneak into the conversation (top 50), given the significant playing time for both Lehner and Anders Nilsson.  If you had Sabres in the right spot, they may not have hurt you.

The miracle deals that happened last year are not likely to be replicated or repeated this Summer, but you just never know, I suppose.  Out of a few of these non-playoff teams, the Sabres have been doing a good job picking up players that actually could help their franchise right away and may make for an expedited trip to the playoffs before other teams.  It still seems rather unlikely that this will happen for them in the 2017 season, unless some of those bigger pieces really flourish with a bit more familiarity under their belts.  If Lehner can stay healthy and the tandem of Eichel/Reinhart stay at a steady pace, this team could make their way into the wild card talk in February, maybe late-March, but it will be their depth that really dictates where they finish.

A lot of what needed to happen for the Sabres, didn't happen.  Faith in Lehner's ability to be a number one might be waning a little, but there is still lots of optimism to be had in some of the forwards for this group.  Eichel, O'Reilly and Reinhart, not to mention Ristolainen on the back end, are making a good case for one of the better, younger cores in the league.  They still need to add some pieces, but it's coming.


The Sabres goaltending situation is the most pressing need, heading into the 2018 off-season, as they only have one minor-league goalie signed on for the upcoming season.  Their current number one, Lehner, is heading to restricted free agency, which isn't a guarantee of a return, but it is still fairly likely.  Up front, the team still looks like there is potential and there are some pieces of interest on the blueline, so it's coming along, but just slowly.

The Sabres only have one player that requires protection, as Kyle Okposo has a No-Move Clause on his current deal, but I don't think he needed it, as he would have been protected anyways.  The rest of the forwards appear to be rather straight-forward and the Sabres will be protecting Lehner as their one goalie, but the intrigue comes from the blueline.  I have the Sabres protecting 7F/3D/1G, which is going to leave some pieces open, to which I have left both Dmitry Kulikov and Josh Gorges exposed, which may require some wheeling and dealing to keep one, the other or both.

Unrestricted free agency may prove to be interesting, as Brian Gionta, at age 38, will be on the bubble for another year, Dmitry Kulikov and Cody Franson are both up this year and back-up goalie Anders Nilsson could also move again this off-season.

Restricted free agency isn't nearly as pressing, but there is work to be done.  Marcus Foligno and Zemgus Girgensons each had down years and are looking for new deals, while goaltending in Robin Lehner and Linus Ullmark both need deals.

The cap number is supposed to go up from the $73 million in 2017, so there's lots of room for the Sabres to wiggle and depending on what they lose at the expansion draft, they might have even more room for their new General Manager to play with.  It would be a fun job to take, no doubt.

The Buffalo Sabres were another one of those teams that were able to give an audition for next season to one of their young prospects, okay maybe a few of those prospects.  2016 1st round pick Alexander Nylander was one of the interesting auditions, as his scouting reports suggest that his size and his will to get into the dirty areas are a concern, so the Sabres were able to give him four games of experience, just to see what it was all about and he did come away with an assist, but now the question will be, how will he adjust to the men's game?  Lots of positives coming from 2015 2nd round pick, defenseman Brendan Guhle, who appeared in three games at the start of the season, before being sent back to junior, he may be one to watch next season as well.

The Sabres are growing deeper at the blueline already, having plenty of youth and NHL-ready talent at that position and there isn't a goalie that seems to be head-and-shoulders above anyone else, so the look will be to go to the forwards and Cody Glass of the Portland Winter Hawks might be a keen guy to look at.  Skating is among the best in the class and it sounds like he has a good eye for the game.  Playing down the middle can't hurt this team, plus he'll have lots of good centres to look up to in this organization, like a Ryan O'Reilly.

Between O'Reilly, Eichel and Ristolainen, those are three pieces you'd love to have together on any given team in the league and they belong to the Sabres.  I'm just not sure that their excellence can overcome the burden of inconsistency that Kane, Okposo and Moulson are generally good for.  I don't think that the Sabres goaltending is that bad, the Sabres blueline is a work in progress, so it won't be easy for them, but coming together and overcoming some attitudes is either a team building function or a housecleaning bit of trades away.  I'm not convinced that this team is capable of the playoffs, until one or both of these things happen and they may still continue to struggle, despite their ever improving core.
Posted by opiatedsherpa at 12:00 PM