It was a transitional season for the Detroit Red Wings and a lot of that will be harped upon when we get to what I said at this time last year, so I will try not to drone on about it in the introduction.

The Red Wings and their playoff pedigree had been challenged in the last couple years leading up to the 2017 season, but the indications leading up to the season were that of this transition period, going from a playoff team to not being there when the dance starts.  Detroit was just very fortunate to be as good as they were for that many years.  Now, we start to see change in this organization.

Sadly, the Joe Louis Arena wasn't able to host a playoff game in its final season, but with all of this change, the new arena will be the site of some rebuilding and depending on how management tackles this, it may not take very long until they are back to where they should be.

Offensive struggles and the inability to keep the puck out of their own net will certainly add up to a season where there are no playoffs and the management team just couldn't fill the shoes of those players who had departed in the off-season and that's really what it all came down to in the end.  It's a fairly natural cycle in sports, be it at the professional level or the amateur, the challenge will be, how management recovers from this down year. 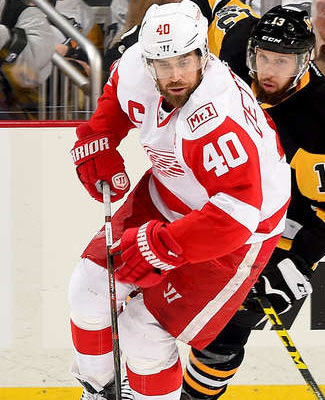 At the draft in October, there was some optimism that things wouldn't be that bad for the Red Wings in the 2017 season, as 12 players were picked at the season opening event.  But as I say that, there was only one pick in the 2nd round, goalie Petr Mrazek, and then we didn't see another pick until the 7th round.  Injuries forced a couple of Red Wings to be dropped at the first Waiver Draft, where none were picked up, and then the second Waiver Draft saw one more dropped to two picks.  With Thomas Vanek dealt to Florida at the deadline, the Red Wings were left with 10 active players at season's end.

Veteran forward Henrik Zetterberg led the Wings in points this year, despite being an 8th round pick at the draft, picking up 17 goals and 68 points in all 82 games this season, which was good enough for 37th overall, a 2nd round pick finish.  The draft really missed the boat on this one and Marcin cashed in with one of the better bargain picks of the year.

In total, the Red Wings had 10 pool worthy players on their team this season, so at least the pool was bang-on for that number.  Both Petr Mrazek and Jimmy Howard were worthy from the crease, finishing 34th and 47th among all tenders.  Gustav Nyquist, Tomas Tatar, Frans Nielsen, Anthony Mantha, Dylan Larkin and Andreas Athanasiou were all worthy from the forward ranks, while only Mike Green was notable from their blueline this year.  Long gone were the days of a dominant Detroit blueline.

Datsyuk, Datsyuk, Datsyuk... the 2017 season result relies so heavily on the final decision made by the crafty veteran, that there really isn't much left to say about it.  The Red Wings either are or are not a playoff team next season, depending on whether he stays or goes.  This team could stomach one more year of production, even lesser production at that cap hit, than see it all go for nothing for a whole year.  If he decides to go, I would imagine that a trade would happen, but even still, you can't directly replace that much quality with $3.5 million in potential space, it just seems unfeasible.  And even if the Red Wings convince Datsyuk to stay, they may only push for a wild card spot next season.  Somewhere, somehow... the Red Wings will need a miracle to keep their playoff streak alive.

The Red Wings were unable to convince Datsyuk to return for the 2017 season, but they were fortunate to offload that salary to the Arizona Coyotes for some cap relief and in doing so, did a little bit of magic of their own.  Did it turn into a miracle?  Nope.  The Red Wings missed the playoffs for the first time in forever this season, because there were no miracles to be had.  The Red Wings couldn't find more offense, their defense suffered and goaltending injuries piled on top and here we have the Red Wings on the outside looking in, as the playoffs are underway.


If we're just looking at the numbers from the 2017 season, the Red Wings may not be offering a whole lot, in terms of pool worthy players in the skater positions, but we have to remember that they were having a tough transition year and a number of players underachieved.  Is there anything there that would suggest things are going to get better?  The three defenders that are all over $4 million per season should be able to bounce back, one would think, and that would be a fine start.

There is only one contract on the books that requires any protection at the expansion draft and it belongs to Frans Nielsen, who was pool worthy, so there's no real issue there.  The Wings are also in dire salary cap straits, so there's a good chance that they could be hanging a few of their bigger deals out to dry, just for the sake of potentially dropping that lump for nothing.  I could see Henrik Zetterberg, Darren Helm, Niklas Kronwall, Jonathan Ericsson and Jimmy Howard all dangle out there for Vegas to snap up, which a few of those players could be good pillars for the new franchise.

More to their salary cap woes, the Red Wings were really deep in Long Term Injured Reserve relief in the 2017 season and with Johan Franzen still on the books at nearly $4 million, they will likely need his help in that regard again.  The 36 contracts, including Franzen, are already coming in at $80.1 million, which also includes a big buyout for Stephen Weiss.

The Red Wings also have a couple of pool worthy restricted free agents to take care of in Tomas Tatar and Andreas Athanasiou, the latter coming out of his entry-level deal, but both will require a good chunk of change.

Unrestricted free agency isn't going to help this team any, as Drew Miller's $1 million deal from last season is one of the biggest coming off.

When you're in this deep of salary cap troubles, teams will usually rely on their youth to jump in and offer up cheap ice-time against the cap, but the Wings need a lot of help.  They may find some in Tyler Bertuzzi this season, as the 22-year old has slowly come up through the system and he even appeared in seven games for the team this past season, not registering a point though.  I'm sure the Wings are hoping that Evgeny Svechnikov could expedite his career trajectory, but they are not going to push the 2015 1st rounder too hard quite yet.

The draft will be a busy time for the Red Wings, as they stockpiled a bunch of picks in the 3rd round, but they also have their 1st round pick, the 9th overall selection, where they could use a home run pick at just about any position.  There's lots to like about defenseman Cale Makar, who may still need to grow into a more durable NHL frame, but the scouts are raving about his offensive upside, something the Red Wings have surely missed over the last few seasons from the back.  Sure, a kid like Makar might be a couple years away, but it is addressing a big need for them down the road.

Things are not so rosy for the Red Wings, heading into the 2018 season, but if they can somehow solve some of their salary cap woes, they could still find themselves competing for a little while.  I just don't see the other 30 NHL clubs giving the Red Wings much of a hand though, I'm sure they'd rather see them wallow in the draft lottery for another year or more.  This off-season will be a struggle for the Red Wings, but if there is one guy who is up for the job, it's their GM, Ken Holland.
Posted by opiatedsherpa at 12:00 PM