It takes a whole lot to become a powerhouse in the Central Division these days, but the Minnesota Wild quietly went about their business, collected many of the right pieces and through no fault of anyone else, they put together a solid roster, which not only competed well against fellow division teams, they put up significant results everywhere they went.

Thanks to a fantastic core group of talented players, all sitting at ripe ages, and a few savvy signings in the off-season sprinkled in, the Wild became the second-best team in the Western Conference, by virtue of points and they appeared to be ready to make some noise in the playoffs.

Unfortunately, for the second-best team in the Central Division, which they were, their prize in the playoffs is getting the third-best team in the division, which ended up being the St. Louis Blues.  Now, as much as their record wasn't quite as stellar as Minnesota's, they also had a hunger for the playoffs and a team that was very solid right through it and they made short work of the Wild, dispatching them in five games.  A bitter disappointment for Minnesota, indeed, but certainly like Edmonton yesterday, they have the team that can also learn from those failures and put something stronger together next season.

The Wild are far from a team that needs to worry, but they could really use another savvy add somewhere in their lineup that could really boost them over the top in the 2018 season. 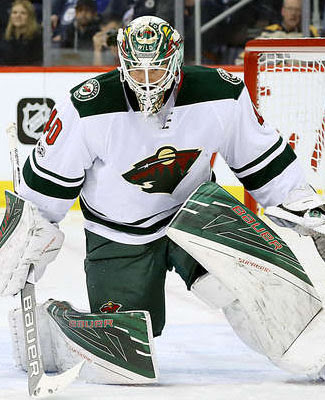 The Wild's depth was not really questioned at the draft this year, as teams sought after them, more at the deeper levels, taking 11 players in total.  Devan Dubnyk was the team's only 1st round pick, taken 9th overall in the goalie rush, but then it was an even spread past the 4th round of the draft itself.  Their popularity grew at the start of the season, adding two more players at the first swap and then an injury forced a drop at the second swap, not to be replaced.  The Wild landed Martin Hanzal and Ryan White at the deadline and that gave the Wild 14 active players on rosters, by the end of the year.

Dubnyk was more than justified with his 1st round selection and even bettered his pick rank, by finishing 6th overall in pool scoring, finishing with 40 wins in 65 appearances and 90 points in total.  He has quickly become the back bone of this team and in impressive fashion, no less.

The Wild were not short on pool worthy players, further justifying the hockey pool's fondness of the team.  Nine forwards finished in the top 200 and in order they are, Mikael Granlund, Eric Staal, Mikko Koivu, Nino Niederreiter, Charlie Coyle, Jason Zucker, Jason Pominville, Zach Parise and Martin Hanzal, an impressive list, even if a couple of those names may have underachieved a little.  The blueline was also strong for the Wild, Ryan Suter, Jared Spurgeon, Matt Dumba and Jonas Brodin were all worthy as well and will likely be looked upon to do big things again in the 2018 season.  With the workload of Dubnyk, the back-up goaltending did not get many sniffs of the net for points, thus devaluing them severely.

The foundation is certainly there for the Minnesota Wild: a good goalie, a core group of defensemen that are still relatively young and a veteran laced forward group that are able to guide some talented youth.  To me, this has the makings of another playoff spot next season, but that position has a lot to do with the way the rest of the Western Conference teams either improve or regress.  The Wild, at best, are going to tinker with this lineup, they likely won't do anything too drastic, so if the coach makes positive strides on this lineup, they will be in good shape at this time next year.

The Wild certainly didn't regress in the 2017 season and I wouldn't call an opening round loss to a formidable opponent as a horribly disappointing finish, rather it's just unfortunate.  The Wild are still coming up and they have some potential to still realize, but it will be about commitment at every level of the franchise, which sees that through.


The Wild were an impact team in the pool this past season and I foresee much of the same again for the 2018 season, maybe even more so.  There might be another Wild player, besides Dubnyk, taken in the first three rounds of the draft, it's hard to say.  The team has a lot of work and tinkering to do this summer, so opinion could sway a little, depending on who is in and who is out.

Vegas will have a long look at what the Wild have to offer at the expansion draft, especially when it comes to the blueline, as someone is going to be left exposed, most certainly.  The four no-move clauses are academic, the rest of the forwards to be protected are fairly straight-forward, we know which goalie is going to stick around, it's just a matter of who is left on defense.  Suter has one of those no-moves on his deal, so he'll stick around, but between Jared Spurgeon, Jonas Brodin, Marco Scandella and Matt Dumba, who do you protect?  You can only protect two.  If it's me, I'm keeping the top two, Spurgeon and Brodin, right now and maybe trying to grease the wheels of the Golden Knights, trying to keep them away from the other two.

Three pool worthy players are headed to free agency, Mikael Granlund and Nino Niederreiter are preparing to become RFA's, while Martin Hanzal will be left alone to go to the open market on July 1st.  Granlund and Niederreiter are both poised for reasonable pay days, given their numbers over the last season or two and it does have some potential to complicate the team's salary cap picture for the 2018 season.

Considering that the first 11 pool worthy players are already coming in at $52.4 million, Marco Scandella still has another $4 million on the roster, the Wild are starting to feel a slight pinch on their books, before we even know what the new salary cap number is going to be, beyond the current $73 million ceiling.  The Wild could get some reprieve from Vegas, but it will only be a little bit, the Wild have some thinking to do this summer.

The kid we're likely going to have rated for pool worthiness next season is Swedish forward Joel Eriksson Ek, who finally made his debut for the Wild near the end of the regular season, getting in 15 games, scoring 3 goals and 7 points.  The 20-year old will still have his rookie status and is poised to fill in a gap somewhere on this roster and will do so with that entry-level deal, which should help that cap number out a bit.  2016 1st round pick, Luke Kunin, scored his entry-level deal out of college already, which could give him an extra push towards a lineup spot or at least start his development in the AHL.

The Wild are the first team of the bunch to not have their 1st round pick, as they dealt it away to acquire Martin Hanzal from the Coyotes, a move that both ownership and management have publicly kicked themselves about already in this off-season.

With that being said, the Coyotes will use the 23rd overall pick, just to keep the mock draft going from this end, to take undersized centre Elias Pettersson, who fell through the ranks of the 1st round, due to his size for me.  Very few doubts about his hands, just his willingness to get bigger and adapt to the North American game.

The Minnesota Wild have a lot of potential for good things in the 2018 season.  They could quietly have a very productive summer, through the expansion draft, maybe trying to wiggle out another top pick at the entry draft, as they don't have a pick until the 3rd round right now, and right through free agency.  The Wild don't have to do a lot, but they will likely be shopping around for that extra little bit that puts them over, but as it stands right now, they still have the ability to be a top three team in the Central Division, arguably, they have enough for a run at the division title.  I like where the Wild are, what they've done so far has been impressive and there is more to come, I'm sure.
Posted by opiatedsherpa at 12:00 PM