The argument has been made that even though Carey Price didn't play for the better part of the 2016 season, he should have still been a finalist for the Hart Trophy, given how poor their season was without him.  Further proof to that statement, was the turnaround that happened in the 2017 season, all thanks to the relative health of the Habs' number one player.

Yes, the return of Price was a regular season hit for Montreal, the addition of Shea Weber for P.K. Subban still is debated from coast-to-coast, especially with how the playoffs went for the two players, but no matter what the regular season results show, the Montreal Canadiens are still not built to play the long grind in the playoffs, by anyone's guesstimation.

The Habs were fairly convincing, when it came to their Atlantic Division title and some of that was likely due to their competition, not quite being up to par, namely the Tampa Bay Lightning.  Then, once they hit the playoffs, their lack of size, drive and some injuries this year, really couldn't help Price and company out of the opening round, dropping the series against the Rangers.

The Rangers out-muscled the Canadiens and you can argue the goaltending match-up finished in their favour as well.  Now that they know what they're up against, the Canadiens can maybe try and retool a bit in their lineup, trying to make it work for the playoffs. 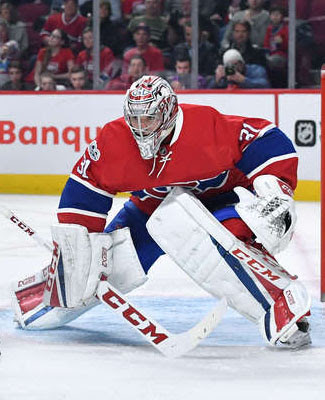 The general excitement for the Canadiens took a hit at the October draft, normally a team that bleeds down to the nitty-gritty, only 10 players were taken initially, leaving a lot of depth out there for later.  One 1st round pick to speak of... guess who?  The first swap only saw two pick-ups, as their depth was deemed important after eight weeks, and then an injury drop gave way to two more pick-ups at the second swap as well.  Two trades mid-season, including one at the deadline, brought two more new Habs to the draft, which left them with a similar total to other years, 15 players by the end of the year.

37 wins, 3 shutouts and 1 assist in 62 appearances wasn't quite the numbers that was expected of Carey Price, but he still was the top pool scorer on the team with 81 points, still a 1st round pick at 13th overall, but his season left something to be desired... or was it the team in front of him?  Nevertheless, expectations were higher in the pool, since he was taken with the 3rd overall pick.

The Canadiens were not short on pool worthy talent and that even seeped down into the back-up goalie role, where they allowed Al Montoya to get enough action in to warrant being 49th among all goalies in scoring with 22 points.  Also getting the nod for being worthy includes Max Pacioretty, Alex Radulov, Alex Galchenyuk, Paul Byron, Philip Danault, Andrew Shaw and Brendan Gallagher up front, while Shea Weber, Andrei Markov, Jeff Petry, Nathan Beaulieu, Jordie Benn and Nikita Nesterov were all good enough from the blueline.  That is a very impressive group, signalling that maybe it wasn't all the team up front of Price, but maybe somewhat on the goaltending?

How the Montreal season hinges on one player is exceptionally difficult to offer an off-season prediction around.  The Canadiens fully expect Price to be ready to play and get a warm up in the World Cup of Hockey in September and then be ready for the grind of the 2017 season and if he can be healthy, then yes, the Canadiens will be better all the way around their lineup.  Confidence will be up, the willingness to take some more calculated risks will have a higher return and that should all add up to more games won and they'll be in that fight for a division title.  If the Canadiens could lock up one more quality defenseman though, that could put them a step up from where they were at the end of the 2015 season.

Price came back, they were in the race for a division title.  Done and done.  Did they lock up one more quality defenseman?  No, they dealt one for another.   Adding Alexander Radulov in the off-season was a plus, but he doesn't play much for defense and he only made up for a few shortcomings offensively through the lineup, didn't really push the team over the top.  It's going to be interesting to see, further down in this outlook, whether or not they are moving in the right direction still.


At the end of the season, the Habs had 15 players that were pool worthy on their roster and potential free agency has seen that drop down to 10 players, just on this table alone.  You would have to believe that the Canadiens are on top of this development and are in full swing, trying to either lock down their free agents or already window shopping for some replacements.  The numbers reflected well upon Montreal and a healthy Price to finish the year, should ensure their impact as being heavy at the draft next year.

Carey Price and Jeff Petry are the only two that hold immediate protection, thanks to no-move clauses, and neither would likely be talked to about waiving those clauses.  Youth and being a part of the core group makes this fairly academic, but it could leave Alexei Emelin, Jordie Benn and Paul Byron exposed, but would any of those three really drop the value of this team?  Byron could be tough to replace, speed-wise, but he was nowhere in the playoffs and that's what they need to replace anyways.

The Montreal Canadiens are poised to be one of the busiest teams, when it comes to their own free agents, especially since they have five pool worthy players getting ready to hit free agency on July 1st.

The 10 pool worthy players already signed are coming in at $36.2 million and that doesn't even include the $10.1 million from Tomas Plekanec and Alexei Emelin, who are pretty big lumps without the scoring production last season.  Between Radulov and Galchenyuk, the Canadiens may have to get creative with their deals or else they'll be scraping the bottom of the barrel for lineup depth.

It sounds like the Canadiens are going to get a real boost on the blueline, as their 2016 1st round pick, defenseman Mikhail Sergachev is poised and ready to make the jump, even at the tender age of 18, 19 when the season starts, something fairly uncommon in the NHL today, as defensemen are brought along slower than other players, but the consensus is, he's ready.  His offensive instincts are there and he already has a filled out frame at 6'3" and likes to use it, so he'll be a force early on.

Size, grit, with a touch of scoring... that would be an ideal combination for the Canadiens at this year's draft and they might be able to get some of that from a kid like Klim Kostin, as the 6'3" Russian has a good portion of those elements that they are looking for.  The Habs have had some good luck with Russians in the last couple of years and if they can lock down a few of those Russian free agents, they would have a solid mentor system for the youngster and he could be an impact player in a couple seasons.

The Canadiens still have the tools to be a very good regular season team, despite how much work they have to do this summer and I have no doubts that they will be able to accomplish the signings of those key players to boost their chances at a division title repeat.  Nevertheless, there just doesn't seem to be enough on paper for me to think that they're going to make waves in the playoffs.  I wouldn't say impossible, but still rather improbable.  If Sergachev can come in and be that impact player in the 2018 season, it would give them another big body on the blueline and it could make them harder to play against, but that's a lot to put on a rookie.  They are an impact player short and if they can find it, we can discuss, at length, how much further they'll go.
Posted by opiatedsherpa at 12:00 PM