A weekend away from the television and the computer made for some serious catch-up to do on the website and the blog on this Monday morning. Playing snow pitch all weekend doesn't have me moving all that quickly today, so there was no real rush to get this published in the wee hours of morning, hence the late publishing time today. So, did I miss anything this weekend?

It was a pretty solid week for Connor McDavid, as he pulled out a convincing 9-point week out and took the Player of the Week honours without the help of any tie-breakers.  The Oilers forward was the clear winner and only had to outpace one other player, who finished with 8 points, so it really wasn't too much of a scoring race this week.

The Oilers captain is now 2nd in hockey pool scoring with 36 goals and 105 points in 68 games this season, but it doesn't seem very likely that he'll track down the overall lead, as he currently trails Nikita Kucherov of the Lightning by 12 points and there's only a few weeks left to go this season.

There's just no catching Stuart's team, especially when his team is still posting Mover & Shaker weeks and just walking away with these weekly honours on top of it all.  His team's 45 points in Week Twenty-Four was 12 points better than anyone else's team in the week, so it was almost a good thing that we didn't have a live look-in throughout the weekend, it just would have been so deflating. 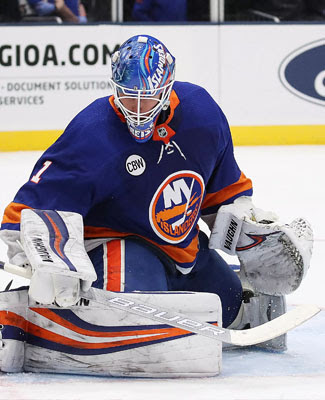 Thomas Greiss of the Islanders led the way for Stuart's team in Week Twenty-Four, taking home 8 points and was the last player in consideration for the Player of the Week and he's been quite the pleasant surprise this season, taken in the 9th round, 214th overall and he now ranks 85th in pool scoring with 55 points this season.  This is definitely one of those picks that have really pushed Stuart's team over the hump this year.

Ryan Getzlaf of the Ducks and Anders Nilsson of the Senators each posted 6 points in the week, while Brad Marchand of the Bruins and Brayden Point of the Lightning each popped in 5 points.  Only one player on Stuart's team wasn't able to post a point, so that was a pretty dominating effort all the way around.

This big week now gives Stuart's team a monster 61-point lead atop of the standings and there will absolutely be no catching him this season.  It's going to be back-to-back titles for his team this year.

The Basement Dweller race was a little bit more interesting, as there were a few teams really putting the hammer down on this turtle race.  It has come down to a photo finish, as Jeremy and Mike's team each finished with 14 points and we had to come down to the tie-breaker to decide who gets the title for the week.  By a 4-3 margin in the goal scoring department, Jeremy's team narrowly escaped the mention, leaving Mike's team with the sleeping bag and the keys to the basement.

Both Mike and Jeremy's teams have been occupying the basement for the three of the last four weeks now, Mike's team taking it twice.  Mike's team has been riddled with injuries through the year and this week has been pretty bad, not to mention his goaltending situation has been less than ideal as well.

With this Basement Dweller nod, Mike's team is now only 11 points clear of 21st place in the standings, holding on for dear life to this top 20 spot in the standings.  It's not much to brag about, but it's something.

10 points now separates 2nd place to 4th place, with the order remaining the same: Stacey M., Grant and Kristy & Don going 2-3-4.  Jesse and Tony's teams are still trying to push their way closer to this race, but time is certainly working against them, with Jesse's team still 19 points back of 4th place and losing time everyday.

The rookie pool has also been settled for quite some time now, as Derek B.'s team has now topped the 100-point mark this week, now sitting at 105 points, 26 points ahead of Clayton's team.  It's not even much of a race anymore.  Dominik Kahun of the Blackhawks was his best freshman this week, finishing with 3 points to lead the way for his team.

The push for shootouts took a bit of a hit in the week, as we didn't see nearly as many skills competitions as we did in the previous two weeks before this.  Only 4 goals were collected from shootouts in Week Twenty-Four, 3 out of 4 goals were collected by the top three teams in the mini-game standings: Grant, Mike and Ryan.  Grant's team now holds a 13-10 advantage over Mike's team, now with only three weeks to go.

Clayton's team managed to collect one more game-winning goal than Stuart's team, which now took down the overall lead down to 7 game-winners, 45-38, with three weeks to go in the season.  Eric's team is only 3 goals back of Clayton's team too and we've still got plenty of games left to play this season, so there's a chance that we can see race get a little tighter down the stretch or at least, we can be hopeful for that.

Finally, the goon team of the week belonged to Scott, as his team topped the standings with 29 minutes in penalties in the week, but his team is still 6 minutes behind Stuart's team for top spot in the category.  Scott's team has been fairly consistent this season, posting 158 minutes in the first segment of the season, 157 minutes in the second segment and they lead the third segment with 145 minutes, to date.  His team should be able to win this, except it won't pay out anything.

The pool saw a slight up-tick in scoring in the week, averaging 12 points per NHL game for the pool, but participation remained very steady, both among our skaters and our goalies.  The pool collected a total of 637 points in the week, which isn't anywhere near our best this season.  The last three weeks will see 154 games to be played, so at 12 points per game, that would be a pretty good haul for us, even if we can't win this pool.

In order to get the Newsletter out and done, I'm going to do more of the player notes in their own post later on today.  We'll get to that news before too long.
Posted by opiatedsherpa at 9:26 AM