Only four weeks left to go in the regular season and then we're talking playoffs! Yes, playoffs! And everyone is welcome to play in the playoffs. More on that later this week, I hope.

I'm sort of writing this one on the fly, I didn't have anything prepared for 5am this morning, so here we go!

It was a Florida Panthers kind of week in Week Twenty-Four, where two of them finished atop of the weekly scoring standings at 9 points, but only one of them could take the prize home with them.  When the dust settled and the tie-breakers were determined, it was Jonathan Huberdeau taking the top honour, scoring 4 goals and 5 assists in four games this week, earning his second Player of the Week nod of the season.

Huberdeau's week started out with a fizzle, pointless against the Penguins on Tuesday, but then 2 goals and an assist against the Bruins on Thursday, a goal and 3 assists on Friday against the Wild and then capping the week off with an goal and an assist against the Red Wings on Sunday got the job done.  Whatever playoff hopes the Panthers have, they are sure depending on the performances of Huberdeau and company, but it's still a pretty good long shot, even if there are Player of the Week nods involved.

In the overall scoring race, the 25-year old has been exceptional, ranking 21st in pool scoring this season, to date, with 22 goals and 74 points in 69 games, right inside of the realm of a 1st round pick, if we were to redo the draft today.  That's a pretty good season that Ryan has picked up in the draft this year, taking him with the 62nd overall pick in the 3rd round.

It was a monster week for Neil's team, which shot up just about out of nowhere, pulling out a 39-point week, which was heads and tails above everyone else in Week Twenty-Three.  His team was 10 points better than his nearest competitors in the weekly tally and that shot his team up seven places in the standings, from 16th to 9th.  That's some serious moving and shaking. 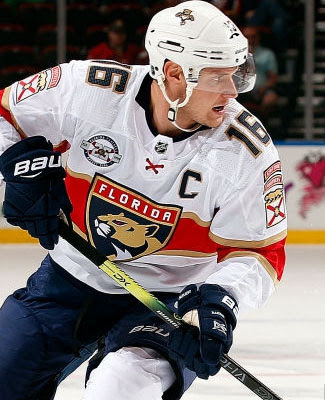 Neil's team had the other Florida Panthers player vying for the Player of the Week nod, Aleksander Barkov, who had a 5-assist night against the Wild on Friday night, really taking him out of the competition for goals, finishing with 2 goals in total in the week.  Still, that's a mighty fine week and one that didn't go unnoticed in the end.

Neil's team also got good weeks from Darcy Kuemper of the Coyotes, finishing with 6 points, David Krejci of the Bruins and John Tavares of the Leafs finished with 5 points each and Adam Henrique of the Ducks also had 4 points to round out the notable players on his side.  Only three players on his team failed to pick up points in the week, so it was a fairly well-rounded effort by his team.

His team was also in the business of scoring goals in Week Twenty-Three, leading the pool with 15 tallies in the week, his highest weekly tally total of the season and his team is now running away with the plus/minus category, something we won't touch on in this post entirely, but his team's combined rating is now +104, 36 points better than 2nd place.

It's just a damn shame that this is too little, too late for his team, which saw some real potential early on in the season, but really crapped the bed in the middle parts of the year and dropped his team like a stone in the standings.  It's making up for it now, but a top 10 finish might be the best he gets now.

The Basement Dweller nod was a real turtle race, featuring a tortoise and a bunch of snappers, where the tortoise, Brian's team, got off to one of the slowest starts of any week I've seen that didn't involve a shortened schedule, but it did recover to force a tie-breaker with Jeremy's team, both of them finishing with 13 points.  So, to the goal scoring records...

In the goal scoring department, it was also a tie... 3-3.  So, we then move to the wins.  And by a 1-0 margin, Brian's team narrowly avoids the Basement Dweller, leaving Jeremy's team to take it... congratulations Brian for making it out by the slimmest of margins!

In a year where you would think Connor Hellebuyck of the Jets would have gotten a guy at least one win a week all season, there was the matter of an illness at the start of the week and then a loss to the Lightning at the end of the week and Jeremy also didn't have Carter Hart in Philadelphia, due to an injury, so it was a perfect letting down storm.

Five players, in total, failed to pick up a point for Jeremy's team and his team currently sits in 19th, where it was sitting at this time last week.

The top three remained the same: Stuart, Stacey M. and Grant, with the lead being extended for the first time in a month, now back up to 38 points, with only four weeks left to go.  The difference between 2nd and 3rd remains at 8 points, since both teams finished with 25 points this week, which was both better than 4th, Kristy & Don, as they are now 10 points back of the money at the end of play on Sunday.

Jesse and Tony remain hopeful that they can catch the duo, but 22 points for Jesse, just to catch 4th, is a big hill to climb and Tony is 6 points back of Jesse.  Not impossible, just very improbable.

Derek B.'s team had somewhat of a down week, finishing with only 4 points, which was tied for the best week in this mini-game with Stuart's team, but that's a moot point here.  Derek's lead is now 22 points, as his team now sits at 99 points from his freshmen and will easily clear the 100-point mark here this week, barring a disaster.

After very little action through the middle part of the season, this shootout game has really picked up as the pool notched another 10 goals in this contest, Grant now finishing with back-to-back weeks with a pair of goals and his team has now opened a 3-tally lead in this mini-game over Mike's team, which was unable to put one in.  The games on the schedule are tightening up, so it's still anyone's game, in theory.

With more shootouts, means less actual game-winning goals in the flow of play, as the total was down by a goal from last week and Stuart's team was unable to post anything and Clayton's team was able to find a winner this week.  The overall lead is still 8 goals, 44-36, so time is really running out and the playoff race is not helping Clayton's cause any... neither are his injuries.

With the NHL playoff race heating up, teams are tightening up their defenses and scoring is taking a turn for the toilet.  The average pull from an NHL game was down nearly a quarter of a point, while participation was holding relatively steady.  It was the quietest week of the third segment, so now we're really going to ramp up the games, the final week, in terms of games will look something like the following: 53, 51, 52 and 51.  207 games left to go this season, get your points while they last!

The upper-body injury that Vladimir Tarasenko has suffered is believed to be a little more serious than originally suspected and the team announced on Sunday that they will allow him to rest for the next 10 days and they will reevaluate him after that. They obviously didn't specify anything more about the injury itself, so your guess is as good as mine. It's a tough break for the team in a playoff spot battle, but the next 10 days won't break it, so they might as well have him ready for the last two and a half weeks, closer to 100% than not.

It certainly doesn't help Eric's team, which has now dropped down to 12th place, hoping for a top 10 spot.  Losing one of his top forwards for this next week, may hurt a lot, starting the week 8 points out of that 10th position.
Posted by opiatedsherpa at 6:11 AM