No problems or tie-breakers for the Player of the Week nod this week, as it was very clear first thing this morning, who the best player in Week Twenty-Two was... Marc-Andre Fleury of the Vegas Golden Knights.  He was the only player in the pool to post 10 points in the week, while the closest players to him had only posted 8 points.  That makes it pretty easy, right?

Fleury went 3-0-0 with 2 shutouts in the week, earning a win against the Stars on Tuesday, and then back-to-back shutouts against the Ducks on Friday and the Canucks on Sunday, making 34 and 19 saves in those shutouts, respectively.

This now brings his overall total up to 32 wins, 8 shutouts and 2 assists, good for 82 points in 56 appearances this season, good for 8th overall in hockey pool scoring and he is the top goalie in the pool, 8 points better than his competition for the title.

Fleury was one of the goalies taken in the 2nd round of the pool, taken by Troy with the 28th overall selection, and he's turning out to be quite the bargain, ranking as a high 1st round pick after this week and carrying a lot of momentum into the last five weeks of the year.

I had asked Tony what he was going to get up to this weekend on Friday afternoon and he had said that he was going to take the Mover & Shaker this week, but otherwise he had no plans.  He was still a couple points back of the lead at the time, but all of a sudden, in the flash of one Saturday afternoon matinee between the Oilers and Blue Jackets, the lead was his and he never looked back. 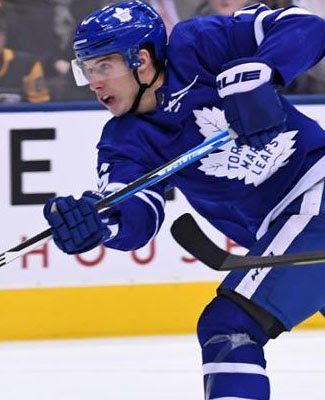 Tony's team finished the week with 40 points, just narrowly beating Eric's team, which finished at 39 points, and Tony's team climbed up out of the big group of teams and a smaller group, 5th to 7th, has been formed, the three teams now only separated by 5 points is there, where Tony's team is riding the caboose of that smaller train, but it's a group of teams that still plan on threatening the top four.

The week was led by Mitch Marner of the Maple Leafs, who finished with 7 points, followed by Mikko Koskinen of the Oilers with 6 points and then Connor McDavid of the Oilers and Week Eighteen pick-up Travis Sanheim of the Flyers each with 5 points.  Three players on Tony's active roster were not able to pick up any points, but he still had more than enough to earn the top spot in the weekly scoring standings.

Tony's side has been on the climb, ever since they bottomed out for the last time in Week Fourteen, dropping down to 18th spot, steadily climbing the ranks and now sitting in 7th place, with a good number of Waiver Draft adds to their name this season.  It has been an impressive run, where they now stand 41 points out of the money and are closing all the gaps in front of them, ranking 2nd in the last segment of the season, to date, posting 133 points since the start of Week Nineteen.

The Basement Dweller turtle race was an interesting one, which flipped and flopped all over the place in the last few days, but when the excitement (or lack thereof) finished, it was Steve's team sitting alone in the dark, reading a book under a single light bulb, listening to the sounds of leaking pipes.  His team's 16 points were not enough to keep him safe.

The 16 points saw his team drop down from 7th down to 11th place, the first time he finished a week outside of the top 10 since Week Fifteen, but he's still part of that tight-knit group in the standings, which now goes from 8th down to 13th, which is only separated by 12 points.  You can add another three teams to that group, if you went down to 22 points, but that's for another time, I guess.

Nicklas Backstrom of the Capitals and Evgeni Malkin of the Penguins each posted 3 points in the week, trying their best to keep his head above the water here, but it wasn't enough.  Four players on his team were not able to register a point and those who did, just didn't get enough.  That's a pretty tough week.

On the bright side, Steve's second season in the hockey pool is going much better than the first one last year, where his side just couldn't catch a break and finished in last.  With this big of jump from one season to the next, we should expect him to be in the money next year.

Make this two straight weeks where the lead has been chipped away at, as Stacey M.'s team has taken 3 more points off of it, now leaving Stuart with a 35-point lead with five weeks to go in the regular season.  Stacey will need her team to really step it up here, because this rate just won't cut it for a win right now.

Grant's team retook 3rd place from Kristy & Don, but is still only 3 points of 4th place, but only 8 points back of 2nd place too, so there's still lots of play left in that race.  However, it does appear to be only these four teams now, as the gap between 4th and 5th is now 33 points and it will need some kind of run to even close that gap, let alone make it to the money.  That's not to say teams won't try, because they will.

Derek B.'s team had another strong week in the rookie pool, posting another 7 points and his lead is now up to 20 points over Clayton's team.  His numbers are just too great, in terms of participation in this mini-game, so it is pretty well impossible to overcome this lead now.

Grant's team also posted a pair of goals in the week, taking the overall lead at 10 markers, followed by Mike at 9 goals, Ryan is now up to 3rd place with 8 goals and Dale's team is among a group of four teams with 7 goals.

Are we finally seeing teams really buckle down now and try and scrap out those valuable points in the standings?  It sure looks like it, doesn't it?

More shootouts means less game-winning goals in regulation or in overtime, but the pool didn't do too badly, still collecting 32 game-winners in the week.  Stuart's team had the weekly high at 5 goals, increasing his lead back up to 9 goals over Clayton's team, which had been chipping away, week after week there for a while.

Clayton had the goon team of the week, thanks to another outburst by San Jose's Evander Kane, finishing the week with 39 minutes, which edged out a couple teams which finished at 36 minutes in the week.

Stuart's team still holds the top spot in this race, but Scott's team is still tops in this last segment of the season and is only 5 minutes back, 426-421.

It was not a strong week for the pool, as the averages have been dipping again.  In total, the pool only posted 662 points collectively in 55 games on the schedule, just a shade over 12 points per game for those counting.  Participation hasn't been terrible, but it hasn't been great either and it didn't help that the trade deadline came and went and players are probably still either unwinding from all that stress or unpacking from all of those moves.  Either way, maybe the shock value will be gone for this coming week, which only has 48 games on the docket.

Wild forward Zach Parise missed Saturday's game against the Flames, due to a sore foot, which he suffered earlier in the week, blocking a shot. He did, however, return for Sunday's game against the Nashville Predators, just showing how minor that injury actually was. It doesn't look like Parise will miss much more time, which is good for the Wild, who are really trying to dog out some wins and make it to the playoffs, a spot that they actually sit in right now.

Dale C.'s team missed out on one skater game over the weekend and that could have been the difference between finishing the week in 13th, which it did, or 9th place, if Parise was to have a great night against the Flames.  Just saying.

The Philadelphia Flyers were without forward Jakub Voracek for their game against the Islanders on Sunday afternoon, as a lower-body injury has sidelined the Czech scorer for the moment.  Voracek was a late scratch for the game and there hasn't been much indication about where he suffered the injury or how long the team expects him to be out, but with the team on the outside of the playoff race looking in, they'll be looking to rush him back as quickly as possible, just to make that last wild card spot.

For Derek B., this injury doesn't concern him a great deal, since Voracek hasn't been a rookie in a long, long time.  Derek's team sits safely in 24th, 32 points back of 23rd and 16 points clear of the bottom.
Posted by opiatedsherpa at 6:11 AM

Hi thanks for sharinng this