The Anaheim Ducks were off-the-charts surprising in the shortened 2012-13 season, because they were really hard to gauge as a club going into the shortened year.  As it so happened, I really didn't think the Ducks were going to make much of anything, especially given that they really hadn't changed too much, there wasn't a great influx of talent, on paper, nor was there a great buzz about them.  Which was why I would consider them the biggest surprise of the shortened season.

The one thing that we really didn't count on was the impact that Viktor Fasth was going to have on the goaltending situation of the team, nor what it was going to mean to the top players of the side, like Ryan Getzlaf and Corey Perry.  For the most part, I would credit Fasth with giving the team that added boost, from an outsider's perspective.

The 2013-14 edition of the Ducks will be a much different group of cats, to say the least.  Change has been made, due in large part to the lowering of the salary cap, thanks to the new CBA agreement.  There are some new faces, some familiar old faces returning to the side and some young players now ready to make that real NHL impact that we've been told that they can do. 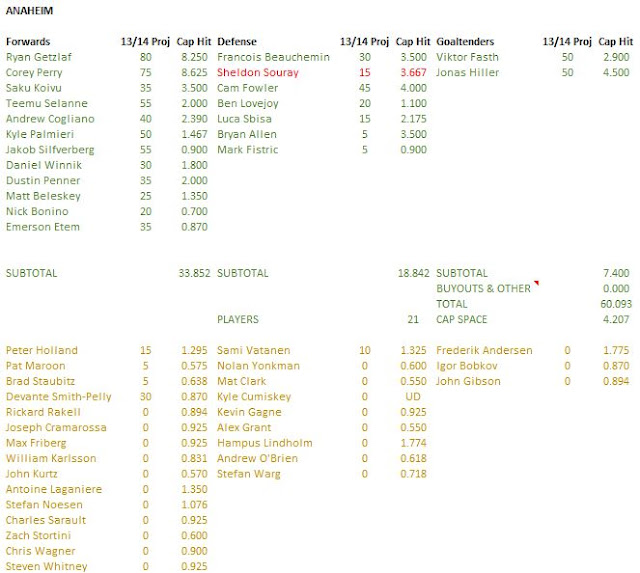 The Ducks have their fair share of forwards that are ripe for the picking in the draft this year, since they really put on a good show last season.  The question is more whether or not they can carry that momentum forward into the 2014 season and if they can, I think the points above look reasonable.  Ryan Getzlaf and Corey Perry remain as the two top forwards, who will likely be taken early and should be, by their projections.

It will be hard not to choose a guy like Teemu Selanne, in general, but it could be a bit tough to pick him in the right spot this year.  Will he have a big year for his big send-off?  Will his age get the best of him?  Something in between, perhaps?  Well, I have Selanne in at around 55 points, which will put him in good shape.

I think the real sneaky players will be more of their youngsters, as Jakub Silfverberg (who came over from Ottawa in the Bobby Ryan deal), Kyle Palmieri, Emerson Etem and Devante Smith-Pelly will be the really game-breakers for Anaheim.

Old veterans, like Saku Koivu and Dustin Penner will be around for some seasoning for your pool team, likely as late-round picks, but that's about all they should be considered as.

The blueline for Anaheim is somewhat of a deceiving looking group of guys, that you'd look at and think there isn't a great deal of scoring potential there, but they do seem to manage to do the job.  I wonder if it is other teams looking at them on paper and thinking that they are the least of their worries.

I get the feeling that Cam Fowler is going to breakout this season and lead the way for the Ducks, as he had a bit of a low year in 2013.

Look for Francois Beauchemin to chip in adequately and even have a sleeper pick like Ben Lovejoy hanging around, if you need a defenseman late.

There is trouble in these parts.  Who do you go with?  The old favourite, Jonas Hiller, or the new kid on the block, Viktor Fasth?  I think it will be a matter of riding the hot hand for the Ducks, so there could be an even split.  I wouldn't go after Anaheim goalies too quickly, unless there is something catastrophic that happens in camp, before your draft.

As mentioned above, I am looking at Cam Fowler to have a breakout season.  He'll be the big one for the Ducks, but the young kids on the forward lines are going to be fun to watch this year.  Jakub Silfverberg is the other candidate for a good sleeper pick, which could pay off big this year.

Announced in August, the Ducks will be without defenseman Sheldon Souray until the end of November, at the earliest, after suffering tendon damage in his wrist, which was surgically repaired.  A big hit to the club, if they are going to push for another division title.

With the ageless veteran, Teemu Selanne re-signing with the club yesterday, that makes everyone accounted for in the Ducks camp in September.
Posted by opiatedsherpa at 7:15 AM