The Florida Panthers are a curious team.  Looking at their roster, they are doing a fine job of building out from the back, which will be on display in 2014 and they seem to be going in the right direction, although you may not see as many wins as Panthers fans may want right away, but you can see that it's coming.

Looks like Jacob Markstrom is going to be the guy, finally, in Florida between the pipes and the blueline appears to be building up with a good balance of size and offensive skill.  You throw in some key forward draft picks like Jonathan Huberdeau and Quinton Howden and you have the makings of a good team.

However, unlike the team they're modeled after, the Blackhawks, the quality of depth players available to build teams around isn't quite as affordable or available as it was for Chicago when they were building teams right into Stanley Cup contention.  The Panthers have their work cut out for them. 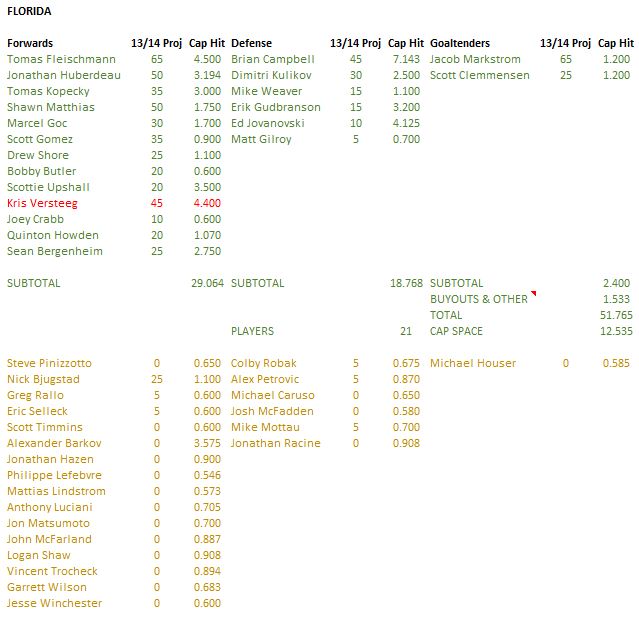 The Panthers' forwards are a group of underdogs.  I think that's the best way to describe them.  Until Jonathan Huberdeau can separate himself from this group as a bonafide top end player, he will wear the jersey and likely draw the same comparisons to a lot of his teammates.  If Huberdeau can get the job done, he'll change the face of this franchise.

You look at Tomas Fleischmann, Scott Gomez, Scottie Upshall, Kris Versteeg and Sean Bergenheim and you see some guys who have scored before, been hit by injuries before and are now part of a collective where you cannot really take them too seriously, because they haven't done anything as a unit yet.

The Panthers have some young talent to come up, but there will be some shifting of players on and off the roster, if they are to move in, so keep an eye on this club for some sleepers.

One of the few players that continue to amaze me year after year is Brian Campbell.  As a blueliner, he gets put into some situations that don't seem like the best fit for a mobile defenseman and those are few and far between, but he still manages to collect points.  I think this year I'm going to give him due.  I think he will be among the better defensemen this year, unless I've jinxed him.

The only other defenseman worth looking at in Florida is Dimitri Kulikov and I think he is coming along quite well as a young defenseman, now 22 years old.  Kulikov is developing well in a less-than-offensive situation in Florida, so if the team can string together some goals, he should be right in the middle of it all.

I believe Jacob Markstrom is going to be given every opportunity to succeed, but there will likely be a motion to keep him fresh, which means Scott Clemmensen will likely get enough time to make an impact as well.  Both goalies should be chosen this year, depending on how deep your draft is, but if everything goes according to plan, I think Markstrom will be a good fit for most teams.

The Panthers have all kinds of players who could break out this year.  Huberdeau (beware of the sophomore jinx), Howden, Markstrom... but Shawn Matthias' numbers have been growing year after year, so I would look at him to be the breakout player for the Panthers, possibly relieving the pressure off a kid like Huberdeau and making the second year transition a little bit easier.

It sounds like the Panthers are going to be very careful with Kris Versteeg's knee and that may include not having him participate in training camp right away.  There could be some clearance issues that need to be finished with before everything is deemed good to go.  This injury will be one to keep an eye on and if there is any indication that Versteeg is going to miss more time, be sure to revise your projections.

Everyone of the RFA variety is signed.
Posted by opiatedsherpa at 4:30 AM