The Minnesota Wild were a playoff team in the shortened 2013 season and since they barely snuck in, it is really hard to gauge whether it was a success or somewhat of a disappointment.  The Wild made drastic changes before last season, so expecting a solid finish in the regular season was reasonable.

Nevertheless, with a season with their two big 2012 free agent signings under their belt, I think the expectations will be much higher in the 2014 season, which means Zach Parise and Ryan Suter will be looked upon to carry this team again.  Thankfully, they'll have help.

The Wild have branded themselves well as a hard-working bunch of players, give or take a couple, that will grind out some offense, while playing some reasonable defense.  The biggest thing they were missing last season was that bit of chemistry among their top players, which was something only a season of playing would help.  This team should be a tough one to play against this year. 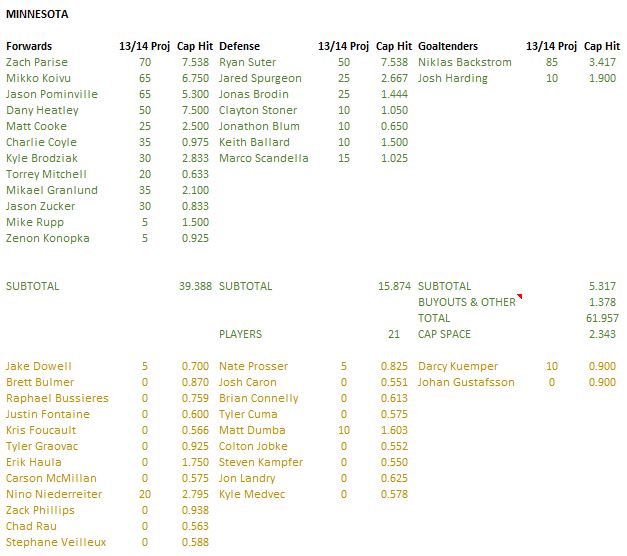 The usual suspects, Parise, Mikko Koivu, Jason Pominville and Dany Heatley will all be snapped up in reasonable order this year and I think they will have pretty good seasons, all things being equal.  You can interchange each of these players and they should be good for some offense at various points in the season.

I do believe that the Wild are going to be a hot bed for young talent, somewhat in the sleeper position, as they will boast Charlie Coyle, Mikael Granlund and the newly-acquired Nino Niederreiter.  I wouldn't go so far as to say try and pick up all three of these players, but I will say, you could spice up your line-up with one of these guys.

Beware of Matt Cooke, as his numbers with Pittsburgh are a bit skewed to the talent he was occasionally playing with.  Cooke was brought in to replace the grit that the Wild traded away in Cal Clutterbuck, but he doesn't have that natural scoring touch without help.

Last season was a monumental one for Ryan Suter, who finally climbed out of the shadow of being the second half of a strong duo in Nashville and finally made a name for himself as a top end blueliner.  Suter was one of the best defensemen in the NHL last season and I think he will build on the shortened season and make a big push for the Norris this year.  I might rush to pick him up.

The Wild should also have a couple of other pool worthy guys on the back end, as Jared Spurgeon and Jonas Brodin showed that they were more than capable of carrying some offense for the Wild.

The Minnesota Wild are going to compete for a playoff spot and Niklas Backstrom is going to be a big part of that push.  Projecting him high is likely a good idea, because the Wild are going to run him ragged in order to get into the playoffs this year.  The more Backstrom plays, the better he gets, so it works out to be a win-win situation.

The three young players listed above, Coyle, Granlund and Niederreiter, are all going to be candidates for breakout players.  Even a kid like Marco Scandella on the blueline will be a guy to possibly look at through camp.  If you're stuck in pick limbo, see what's left in the Minnesota ranks, you might get an answer there.

None.
Posted by opiatedsherpa at 4:00 AM