The Carolina Hurricanes are a team that really have to rely on their top end players, as they haven't given themselves much else to work on, as they have suffered some pretty bad luck in their drafting over the last few years.

Between players like Brandon Sutter, Zach Boychuk and Drayson Bowman, the Hurricanes were supposed to have some quality talent to fill in behind Eric Staal and Jeff Skinner, but the kids really hadn't panned out and a guy like Boychuk had been kicked around the league a couple times last season.  So, the top end players will have to carry the load.

On the plus side for Carolina, they have been able to manufacture deals that appear to work on paper, picking up players like Jordan Staal and Alex Semin before last season, so they'll have some top end talent to work from. 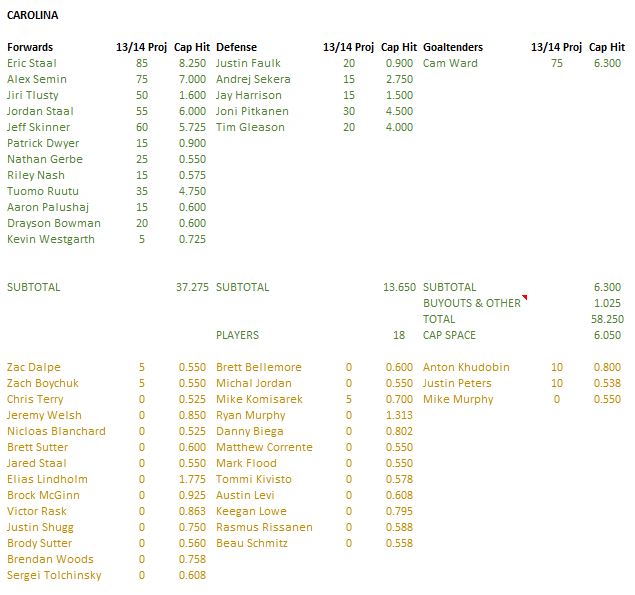 I have found that the Hurricanes players don't normally go as high as possibly they should, so this is a good team to find some draft bargains in.  Eric Staal is a 1st round pick most years, while Alex Semin usually tends to be up there somewhere and then add Jeff Skinner, when he's healthy, to the mix and you have a pretty solid trio to pick from.  Jordan Staal is not a bad pool forward and did okay in his first season in Carolina, so I would expect much of the same from him.

Jiri Tlusty, to me, is a bit of a landmine pick.  He had a really good 2013 season, but I have absolutely no faith that he'll be quite as dominant and my projection of him is a reluctant one, at best.  If you pick him according to last year's numbers, you may be in for a shock.

If you're looking for a bit of risk/reward near the end of your pool forwards, look towards Tuomo Ruutu, who has been really close to being added onto my injury prone list, but he can pick up points when he's healthy.  Something to really consider.

The thin blue line in Carolina is exactly that.  Thin.

Joni Pitkanen, another potential player for the injury prone list, is the team's best offensive threat from the line, but he comes with very few guarantees.

Tim Gleason and Justin Faulk round out the worthy defensemen, as per my projections, and neither really look appealing on paper going into this year.

With Cam Ward, it is either feast or famine, and it is mostly injury related.  When Ward is healthy, he has been a top-40 player in pool scoring, but when he gets hurt, he really gets hurt... dropping below the top 200.  Ward was hurt in the 2013 season, which could mean he's due to bounce back, but my projections are hedging those bets a little, just in case.

In behind him will be a good race between Justin Peters and newcomer, Anton Khudobin.  If Ward was to get hurt, either one of these guys will have to take the reins and that could mean some points.

Anyone due to breakout in Carolina?  Well, I've been hopeful before and only Skinner has really done the deed for me.  2013 pick, Elias Lindholm, has moved to North America for a roster push, while Viktor Rask has played some junior hockey in Canada, so he could be close this year.  A breakout player could improve the projections of many players, including Ward.

Zach Boychuk was the last RFA to sign for the Hurricanes, signing a 1-year deal on August 20, 2013.  He isn't much of a pool player going into training camp.
Posted by opiatedsherpa at 6:15 AM