Rebuilding is the name of the game in Calgary, although no one in the organization will say it outright... or so it would seem.

The difference between the Flames rebuild and the Sabres rebuild is the amount of young talent waiting in the wings.  The Flames, remarkably, have done a reasonable job picking up some young talent, full of potential, but potential will only take you so far.  That potential will have to blossom properly into some long-term gains.

With the loss of Jarome Iginla and the potential loss of Miikka Kiprusoff to retirement, the Flames are practically starting from square one in the 2014 season.  The team will have to look to a key forward to brunt the pressure of an NHL club and still commit to a starting goalie.  There are lots of questions to answer and some of them may not be done through training camp.

The Flames have all kinds of slots open here, so it will be paying keen attention to their training camp and if you're going to be gambling on some of the young talent, you will want to make sure that these picks are going to be late, because these kids may not have as much help as you might think. 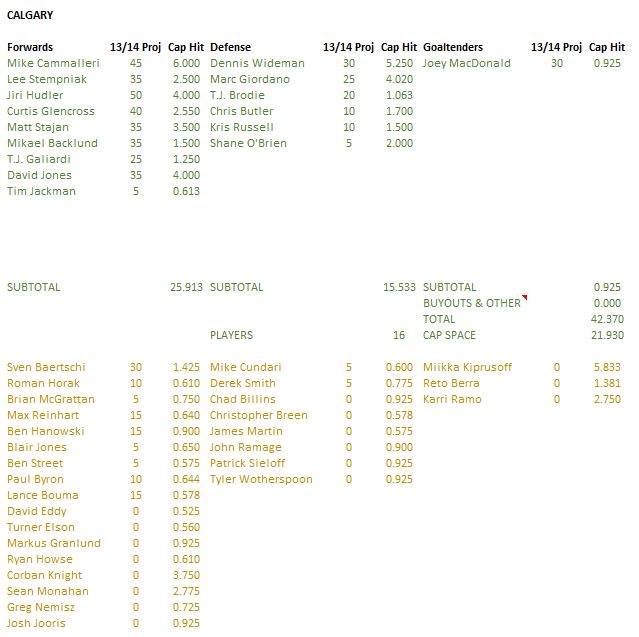 If I was going to look for a leader of this club, going into 2014, I would be looking to Jiri Hudler, as he had shown the most potential and he hasn't quite had the scrutiny placed upon him, that the other players at the top of the table have had, thanks to being there longer.  Hudler should be the pivot of all things offensive this year and will likely be the best forward on the team.

There will be opportunity for Mike Cammalleri, Curtis Glencross and Mikael Backlund to take that role, but it will be interesting to see how these three respond to a new start without a couple of key players they haven't really known the team to be without.

David Jones and Matt Stajan will also likely be reasonable late-round picks, if you're looking for Flames this year, but I wouldn't rush to pick these guys up, as the team, as a whole, is a big question mark.

The Flames have six NHL-seasoned blueliners already on the team and they do have some potential talent to add to the mix, coming into 2014, but there are only a few that I would be comfortable taking this year in the pool.  Dennis Wideman continues to be a good pool defender, while T.J. Brodie is growing as an NHL player and Marc Giordano continues to get minutes in a role that may be a little too big for him.

If anyone begins to fall off the map for the Flames, there are a couple youngsters like Tyler Wotherspoon, who could possibly make the jump.

The million dollar question in Calgary... who will be the starting goalie for the 2014 season?  Miikka Kiprusoff has yet to officially retire, leaving a glimmer of hope for some, but the race appears to be down to Karri Ramo or Joey MacDonald, the two most-seasoned professionals, beyond their retiring legend.  Ramo appears to be the favourite, sight unseen for many Flames fans, as he has played very well in Europe, while MacDonald is known to be a career back-up, who filled in admirably during Kiprusoff's injury-plagued 2013.

Unless you know what is absolutely going on with the Flames crease, it will be wise to stay away for the sake of your pool team.

Right now, the Flames have four open slots on my table for their forwards and a huge spot open for their goaltending, which gives them lots of potential for a breakout player, but right now, I would say it's anyone's title to gain.

Sven Baertschi leads the pack of candidates, but his growth hasn't been quite as expected publicly.  Corban Knight, Sean Monahan, Ben Hanowski and Max Reinhart are all going to be under the microscope this season as well, as leading candidates to possibly breakout, but unless they're on the opening night roster, it will be hard to put any faith in them.

One restricted free agent left on the ledger, as Carter Bancks, an undrafted 24-year old forward, who hasn't not lifted himself into the conversation for another look.
Posted by opiatedsherpa at 6:30 AM