Panthers Deal Kulikov Up to Buffalo 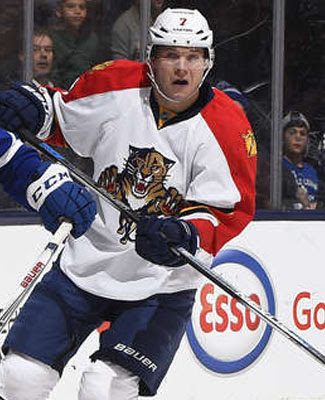 The Florida Panthers are not screwing around in this off-season, they certainly mean business.

With improvements already done to their blueline, the Panthers continued to revamp the defense by making a swap with the Buffalo Sabres, grabbing a little more potential and a little less cap hit in the process.  The Panthers sent Dmitry Kulikov up to Buffalo and took back Mark Pysyk, while also swapping 2nd round picks (the Sabres improving theirs) and Florida gets an extra pick in return.  Quite the jumbled deal.

As much as the Panthers were dropping some established skill in this deal, they are also doing a great job managing their cap space and potentially managing the minutes on their blueline.  Pysyk should turn out to be a very well-rounded defenseman that will wait his turn, where Kulikov was groomed to be a big minute guy with offensive talents.  With Aaron Ekblad preparing to sign a long-term deal and Keith Yandle already signing his, Florida needed to make a little bit of room and find a guy who can worth within these parameters.  Pysyk could be a very good fit here.

In Buffalo, Kulikov is going to be a key piece of this restructuring, which could see the team make another move up the standings in 2017.  He joins a blueline that already has Rasmus Ristolainen, Zach Bogosian and Cody Franson, so there is some upswing talent here in Florida already, albeit some that may not be known for its play in their own end.  We'll cross that bridge later.  For now, this is turning out to look like one impressive core group on paper.
Posted by opiatedsherpa at 9:09 AM