Well, this just won't do.  Sure, we are only two weeks into the season, but we can't have two Greenleys at the top of the standings, so we'll have to kick them out.  They were only supposed to be donations into the prize pool... they can't winning the damn thing!

I'm not sure I am mentally prepared for how this season is turning out.  Two Greenleys at the top of the standings and back-to-back weeks where there is an Edmonton Oilers player as the Player of the Week?  This is a lot to process and we've only had two calendar weeks this season.

Edmonton goaltender Cam Talbot was the Week Two Player of the Week, thanks in large part to his shutout at the Heritage Classic on Sunday afternoon, it capped off a week, where he went 3-0-0, including that goose egg and he was the only player in the pool to finish with 8 points.  This one didn't even need a tie-breaker.

Wins against Carolina, St. Louis and Winnipeg chalked up his points and it gave him the overall lead in pool scoring, now 5-1-0 with a shutout for 12 points.  This is big news for one of our newcomer's this season, Marcie, who has drafted quite well to start the season, owning two of the top three pool scorers this year.

Speaking of the Greenleys, the louder of the two, Stuart, ended up with a monster week in the hockey pool, finishing with an early season high of 36 points, jumping up from 16th place to 2nd, thanks to the early season clumping of teams just getting off the ground.  Still, it wasn't quite enough to reach his brother, Benson, for top spot in the pool, but he finished the week only 3 points back. 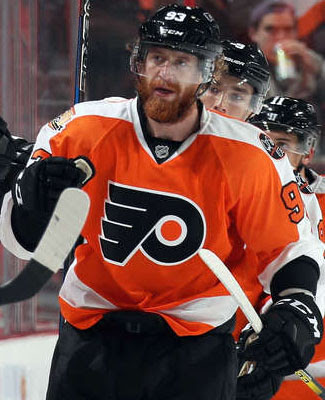 It might be a little too early to tell for sure, but Jakub Voracek is playing with a little bit of fire in his belly, as he is among the league leaders in both scoring and in penalty minutes, helping Stuart to being 2nd in both the overall scoring and the penalty minutes pool.  Voracek led Stuart's team this week with 6 points and the Flyers are seemingly following suit.

Also having a good week for our Mover & Shaker were Zach Parise, John Tavares, Radim Vrbata, Brian Campbell and Cory Schneider, all picking up 4 points in the week.  All of a sudden, that list of players doesn't look so bad, especially when they are actually scoring.

In preparation for some possible new mini-games this season, some new statistics were prepped for the weekly audit and in there was a team's plus/minus stat, just for shits and giggles.  In this case, Stuart's team currently ranks 5th in the pool, with a combined plus/minus of a +6 rating, while the entire pool is a combined -58.

Stuart's team remains fairly healthy, which is a huge plus, especially early on, and his team is among the pool leaders in games this coming week, projected for 46 games.  That gives him a pretty good chance to repeat... which is even scarier, if you ask me!

It hasn't been a great start to the season for Tony, who has seen more than his fair share of bad luck already this season.  A couple of significant injuries are the leading factor for a Week Two Basement Dweller nod, as his team only finished with 12 points and it dropped him down to 22nd spot from 8th place.

On the plus side, it is still far too early to panic, since it is only 18 points to climb back into 3rd place in the pool and that's an excellent week away.  Sure, he would need to get healthy again, but his team could tread enough water for a few weeks and then slam back into action and get back into the race.  It's possible.

Tony's best players in the week all finished with 2 points each and there were five of them, spreading out the scoring through his lineup, but sadly, none of those guys were in his goaltending tandem, something we'l'l tackle here shortly as well.  Jordan Eberle, Johnny Gaudreau, Evgeni Malkin, Mika Zibanejad and Ryan Ellis were the players who potted deuces in the week, all of which could be much better for Tony on a weekly basis, I'm sure.

This week's non-mini-game statistic of the week, plus/minus, didn't favour Tony either in Week Two, as his team is a combined -15 through two weeks, ranking 23rd in the pool, although he was only tied for 17th in the week, at -5.

So, the landscape of the top three positions has changed, as our previous week's leader, Cam, dropped down to 9th place, leaving Benson to come up from 3rd place to take it over in Week Two.  Dale B. went from 2nd place last week to 5th this week and we all know that Stuart took that over with his big week.  Then, jumping up from 11th place to 3rd place, was Marcie, who took the Player of the Week nod and ran with it.

It's still a pretty tight race, where 10 points can drop anyone from 3rd place down to 13th, but those teams below 13th, should hope that their teams get into gear.

The PIM pool is relying heavily on regular pool worthy players going off the deep end and picking up those key minutes to start the season, before those teams down in the basement opt for the goons and then race to the top of the mini-game.  Marcie currently holds the lead in this pool, thanks to Jarome Iginla and Sam Bennett, as they have now combined for 39 minutes, which is better than 15 teams in the pool, to date.  Marcie's team shot straight up past Stuart in this race, with her team holding a 70-56 PIM advantage through two weeks.  Marcie's team had 56 minutes in Week Two alone, which would have given her a share of the lead, if her team was a bunch of angels in Week One.

Dale B. currently holds the title for the Lady Byng, which doesn't actually hold any significance towards the money, which might be a mini-game in itself next year, or at least it'll be on the wheel.  His team has only picked up 14 minutes, so far, and is falling behind quickly, if this was the route he wanted to take at the Waiver Draft.

Three teams were eliminated from the goalie survivor pool in Week Two, taking our remaining teams down to 16 of 25.  Tony and Wes couldn't manage wins on Sunday to stay alive, as they both had a shot at it, while Brian was eliminated after not picking up a win from Frederik Andersen on Saturday night in Chicago.

Now these three teams will be charged with having their goalies play spoilers in the weeks ahead and they could opt for a different mini-game at the Waiver Draft, if they so chose.

The outdoor games mini-game got off to a slow start with the Heritage Classic yesterday, but a post yesterday and the current standings are now up on the website, so you can have at that at any time now.  I can confirm, that Marcie leads this pool as well, thanks to her Player of the Week, Cam Talbot, but we have three more games and we're all keeping our fingers crossed that they are much better than that dull one in Winnipeg yesterday.

The excitement of the new season has already subsided a little bit, as the number of active days in the week went up, the NHL games during the week went up, but the scoring numbers went down a touch.  Int the 48-game week, the pool registered 592 points in total, which averaged out at only 12.3 points per game, down from 13.4 in Week One.  The participation levels were about the same and the PIM per NHL game were also relatively even, which is good.  We're keeping bodies in the lineup and in the penalty box, keeping the pool exciting to watch to start the year.

The Arizona Coyotes offered up a quick, yet unsurprising update on goaltender Mike Smith, as he is already on the Injured Reserve and the team expects him to be on there for a while. The official word is week-to-week, likely reevaluated once a week until he is good to go and it doesn't sound like any surgery is necessary, which is a good thing.

This injury will make the goalie survivor pool a little more difficult for Marcie, as her team is now down to one keeper, but her team has roots in the big money and the penalty minutes, so she won't be short of interest this season.

It sounds like Sidney Crosby is back at practice in full contact gear, which means his return is getting really close.  Crosby has yet to dress in a regular season game after suffering a concussion in practice, just before the season got started, and the Penguins have rolled on without him.  His return will certainly mean big things for the Penguins, who should be close to getting Matt Murray back in their crease as well, kicking up dust on all sorts of lineup questions moving forward.  Week Three in Pittsburgh could be an interesting one.

Crosby's return will be good for Brenda & Seward, who will start the week in 18th place, 18 points back of 1st.  It might be a few good weeks for Crosby to make up that total, but it might not be long for him to close that gap by himself.
Posted by opiatedsherpa at 10:00 AM