The people who run the NHLcom website are quite possibly the worst webmasters in the world.  I think over the last few seasons, they have changed the stats page for all the players numerous times and very few of those changes have been for the better.

Last night, when I was toying around with the website, I had noticed something wasn't quite right and when I went to do the full audit this morning, my suspicions were correct.  They had made some changes and anywhere that a player didn't register a statistic, like take a faceoff or score a goal, a 0% in winning percentage or shooting percentage would be left blank.  This threw a huge wrench into the already difficult works and a crafty bit of programming needed to happen to even peel off the necessary statistics for the update.

Thankfully, this afternoon, the solution was crafted and now I have a working audit system again... for now!

There were a trio of players in the hockey pool that finished with 7 points each, but only one player was able to make it to 8 points and that was Chicago's Corey Crawford, who had a mighty fine week indeed.

In Week Five, Crawford appeared in three games, going 2-1-0 with 2 shutouts, back-to-back shutouts to be exact, making up his 8 points on the season.  Crawford shut out both the Flyers and the Wild, but was thrown into the fray on back-to-back nights, losing to the Canadiens on Sunday evening.

The 8 points brings Crawford's numbers up to 18 points in 13 appearances this season, good enough for 15th on the scoring list, right in the thick of the 1st round candidates, if we were to redraft with our numbers right now.

Crawford is coming in at close to his pick position, as Jeremy picked him 12th overall in the draft, currently getting a fair return, while the rest of Jeremy's team is doing quite well, keeping him atop of the overall standings for another week.

There are also some teams that you just can't shake away off the Newsletter for some stretches of time and Brenda & Seward's team is one of those.. appearing for the third time in five weeks as a notable team, but this time, it's a Mover & Shaker, not a Basement Dweller, like Weeks One and Two. 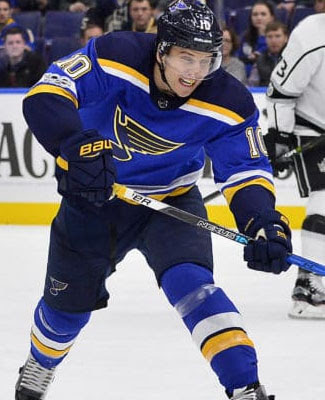 The pool's second duo finished the week atop of the weekly standings, as their team is finding themselves far healthier and producing at the levels they hoped they would when they were drafted.  In the last two weeks, the duo have moved up from 25th to 18th and they are closing some gaps above them, fairly quickly.

Brayden Schenn of the Blues was their top performer in Week Five, finishing with 5 points, raising his team-leading point total to 15 on the season.  Not bad for their 7th round pick this year.

Also having good weeks for the duo were Alexander Radulov of the Stars, Jason Demers of the Coyotes and Erik Karlsson of the Senators, all finishing with 4 points each.  All but one player finished with points in the week, as Jussi Jokinen of the Oilers was their only dud, thanks in part to being a healthy scratch already this season.

They were among the pool leaders in skater games played this week, a far cry from where they were in the first couple of weeks, when they were not very healthy and got off to that poor start.  This could be a recovery for the ages, if they are able to see their team keep pulling points while they have this hot streak of games played.

The second time in five weeks this season, we have had back-to-back Basement Dweller weeks and now the Waiver Draft can't come fast enough for Scott B.'s team, which is in desperate need to improve its ice cold roster.  Scott's team finished with 8 points in Week Five, a season-low in the pool, which includes Week One's short schedule, and now the gap from 25th to 24th has increased from 5 points to 12 points.  Not insurmountable, but it's growing and not shrinking at the moment.

Injuries played a big part in his cold week and a shortened schedule for the Canucks was another big reason for the poor week, since his team is very Vancouver-heavy.  Rick Nash of the Rangers was his team's only guiding light, having 3 points, but only four players on his team were able to register at least a point and that is tough to bounce back from.

It wasn't like Scott's team was crippled by injuries, his team was tied for 14th in skater games played, but the concussion to Marc-Andre Fleury still looms large on his side, especially with the Colorado backup as his other goalie.

Much of the money race remained on the status quo for the week, as Jeremy's team still holds a lead, adding a couple of points to his lead over Benson's team, which now sits at 5 points.  Brian jumped back into 3rd place, as Chris' team fell off the pace a little bit, dropping down to 6th after Week Five.  Dale C. and Derek B. are both in the thick of it, only a few points back of the money spots.  There's still lots of interesting movement to be had.

All 10 teams that opened Week Five in the goalie survivor pool, survived the week and it was done awfully early, as they were all qualified by the end of Thursday night.

Benson, Wilton, Cam, Chris, Jeremy, Stacey M., Mike, Grant, Tony and Stacey C. are your surviving teams to this point.  Unfortunately, with the lack of auditing capabilities, that limited my ability to do a goalie post this afternoon, because that would have required a reset of the stats.

In the plus/minus department, it was a great week for Dale C. and Derek B., who finished +11 and +10, respectively, making some big gains in the standings in Week Five.

Steve still leads the mini-game with a +23 rating to his name, but Dale C. made moves, finishing just above Wilton in the standings at +18, while the other Derek is at +14 at the end of week.

It was another 47-game week in the NHL in Week Five and scoring took a bit of an upturn, which is good for us poolies, as the pool finished with 605 points in the week, the second-best total of the year.  However, injuries and demotions are adding up, meaning that participation is down slightly, both the skaters and goalies took a bit of a hit.  Mostly, everything is holding fairly steady, without too many large variances.

It's a 48-game week in Week Six, so hopefully we can see some record scoring.  Week Two is still tops in the season, a 48-game week as well, where the pool finished with 627 collective points.

Gustav Nyquist left last night's game against the Oilers with a lower-body injury, believed to be a knee problem, but there is a chance that he could suit up tonight against the Canucks on back-to-back nights. Nyquist reportedly tested out the injury today, but there wasn't much in the way of news one way or the other, but there are some reports suggesting that he is a game-time decision.

Stacey M. is certainly hopeful that he can play, especially with her team firmly in the top 10, at 8th place, after the week had ended.  Her team had a strong week of 31 points and will be looking to build on that hot streak right away.
Posted by opiatedsherpa at 6:06 PM