The Waiver Draft has come and gone and teams haven't quite cried about when the next one is coming, but after a rough week for some on the injury report, it probably isn't too far away.  This was the week where we try to make up some ground on the teams that were at the top of the standings, try to close the gap and make it a little bit more competitive for the rest of the year, so it will be interesting to see how that all played out.

There was a pretty good competition for the Player of the Week nod, as a good number of players were at 6 points or more through the week, but it was going to take a double-digit sort of week to win it all and that's what St. Louis Blues goalie, Jake Allen, did in Week Ten, as he put up 10 points to take it all for himself.

Thanks to an injury to his regular backup, Carter Hutton, Allen was forced into some extra duty, as the Blues continue to fend off teams from their spot, atop of the Central Division and in the fight for top spot in the Western Conference.  Allen played in four games this week, beating Montreal on Tuesday, shutting out Dallas on Thursday, beating Detroit on Saturday and then on back-to-back nights, getting the best of Buffalo in overtime on Sunday.  A 4-0-0 record with a shutout will give us all 10 points.

The big week in Week Ten gave the St. Louis Blues number one goalie 37 points in 26 appearances this season, good enough for 11th overall in pool scoring, which is 4th among all goalies this season.  This is pretty news for Cam, who took the Blues netminder with the 19th overall selection in the draft, which means he's getting a bit more than his projected value from the draft.

Heading into the weekend, it was a pretty good race for the Mover & Shaker nod, but Derek B. absolutely ran away with it, as soon as the work week had concluded and he topped out at 35 points, bumping his team back up into the top 10, where he had seen his team fall out of the week before.  This is Derek's third time earning the Mover & Shaker spot, as he has earned one in each season he has participated in now and this is both the highest point total of all of his honours and the highest position he finished a week in with the Mover & Shaker, 9th place.  Things must be looking up! 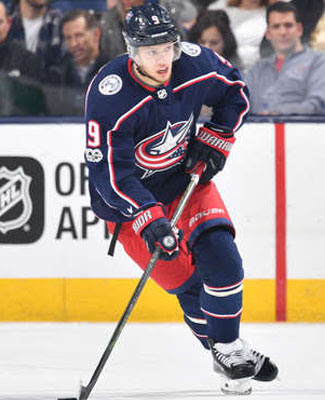 It was a good week from Derek's Blue Jackets, as both Artemi Panarin and Sergei Bobrovsky each finished with 6 points a piece in the week, leading the way.  His other Columbus player, defenseman Seth Jones, also didn't do too badly, finishing with 2 points.

Other notable players on his team include Steven Stamkos of the Lightning, who had 5 points and Wayne Simmonds of the Flyers, who had 4 points.  The only player not to register a point on his team this week was the virus-stricken Jonathan Drouin in Montreal, who did end up playing one game in the week, but obviously it went for naught.

Derek's team has remained fairly healthy, which has allowed for them to continue posting a good number of points.  His team ranks 5th in skater games played, while Bobrovsky keeps his goalie minutes afloat at 15th in the pool as well.  His forwards and goaltending are keeping him in the hunt, with his team ranking 7th in forward points and 8th among keepers, but his defensemen still lack that extra bit of punch.

At the Waiver Draft, he did make a pair of moves, both coming in handy this week, as Tristan Jarry earned him a win in Pittsburgh and Kris Russell did pick up an assist as well.

Derek's peak position in the standings at Newsletter time is 5th place, where his team currently stands 11 points back of, but if his team can jump back into that spot, it's only a few more points into the money.

The Basement Dweller nod needed to be decided by a tiebreaker once again in Week Ten, definitely not the predicament you want to have your team after the Waiver Draft, when you were supposed to be improving your team the week before.  Still, both Brian and Eric found themselves with only 15 points in Week Ten, so we had to go to the goal scoring records in the week.  By a margin of 7-5, Eric kept his team clear of the nod and Brian's team finds itself bunking in the dark for a week.

The last time a Basement Dweller team finished in a money position spot, we have to go all the way back to the 2014 season, where Chris M. finished with 14 points and dropped down to 3rd place in Week Fourteen that year.  Brian's team, in very similar fashion, had 15 points and dropped from 1st place to 3rd place, letting go of a 10-point lead in the process.

Brian's team is just riddled with injuries, which is the main reason for the significant drop in the standings and his risky maneuvers at the Waiver Draft were no big help either.  Mika Zibanejad and Ryan Johansen are both on the Injured Reserve, on the fence about coming back here soon, while Jaden Schwartz, his top forward, is now out for the next six weeks and on top of it all, he took a gamble on Zach Parise in Minnesota, which has yet to start paying off as well.

Needless to say, Brian's team was dead last in skater games played in the week, with only 27 appearances, and out of three starts from his goaltending, he only collected 2 points.

Brian's team will need quite the bounce back week, if he can get some of his injured guys back in the race.

So, assuming that Brian's team can stay afloat in Week Eleven, his team isn't in bad shape to make up for that hiccup.  His team starts Week Eleven only 3 points back of Wilton, who shot up the standings with a great week of his own and he's only 2 points back of Jeremy, who has remained in the money spots all season long.

Teams are nipping at Brian's heels though, as Dale B. is only 1 point back, Stuart is 3 points back, Kristy & Don are 5 points back and Benson is 7 points back.  If Brian's team can't find a way to get healthy, the sudden stop at the end of this fall could be in a devastating position.

Now that we're down to only four teams, it shouldn't come as a big surprise that all of the teams will have qualified before too long in the week.  Week Ten saw all four teams, Grant, Jeremy, Wilton and Mike have their wins sorted out by Wednesday.

It was another brutal week in the plus/minus department, as the entire pool was a -34 rating, as a whole.  No one seemed to want to be responsible in their own end, it would seem.  Now, Brian's team may have not put up the points, but it also didn't skate around very much and be on the ice when their opposition scored, so he remains atop of the mini-game standings with a +43 rating.

Dale C.'s team kept the pace, only sitting a point back in the ratings, while Steve's team lost a point, but still remains fairly close in a very topsy-turvy kind of race.

Four teams in the pool all finished -10 or worse and Dale B. and Chris S. both have now posted back-to-back weeks of -10 or worse.  Yikes!

Voting for the All-Star Game captains will end on January 1st, which is still a few weeks away, so you have some time to help guide some of your pool teams to at least have one player on an All-Star team roster.  Every Wednesday, the league announces each leader for the divisions, in terms of votes, and there are no surprises here at the moment.  Connor McDavid (Steve) leads the way, followed by Steven Stamkos (Derek B.), Alex Ovechkin (Benson) and P.K. Subban (Tony).  These guys would be your early leaders in the mini-game competition, as they have the players already in pencil to be there and you would have to imagine that they will be, regardless.

Wes continues to have a firm grip on the PIM pool through Week Ten, still carrying a 34-minute lead over Brenda & Seward.

Neil's team was the biggest bunch of goons to start the second segment, finishing with 39 minutes and jumping up to 3rd place, but Cam wasn't too far behind, thanks to his Bruins, finishing with 38 minutes in the week.

There wasn't much change to the overall race though, as Clayton's team still leads Cam's by 5 points, but Chris' team was the best set of rookies in the week with 5 points from Monday to Sunday.

We're only days away from the first outdoor game of the season, as the NHL 100 Classic will go in Ottawa this coming weekend and we might have ourselves a little bit of a preview of that this weekend, as if it was like a mini-game that we were playing.  Just to keep things fresh around here.  We all want to know how we would have done, if we had horses in these races.  Stay tuned!

As we should have expected with the Waiver Draft concluding, participation was up in Week Ten, as we saw some record numbers in the skater games played department, averaging 18.3 skater games per NHL game on the schedule.  Unfortunately, that was the only remarkable change in the week, as scoring only increased marginally, no record-setting pace, and our point totals only ranked 3rd out of the 10 weeks played.

The schedule ramps back up to 51 games in Week Eleven and if the pool can keep the pace, we could possibly see some record numbers jump up at us.

After a collision with teammate Morgan Rielly on Saturday night in Pittsburgh, forward Auston Matthews was unable to play for the Toronto Maple Leafs on Sunday night, due to an upper-body injury.  The collision seemed to have left the dynamic scoring forward a little dazed, which has many fearing that the upper-body that was suffered could be a concussion, but the team has yet to confirm any details of it yet.  Matthews is currently considered to be day-to-day, but anything can happen or change here in the next day or two.

For Benson, this is of great concern to his pool team, which is currently in the thick of the money race, not to mention numerous side bets with his forwards.
Posted by opiatedsherpa at 7:06 AM