The Winnipeg Jets are rolling right along, like they didn't even get a break and Connor Hellebuyck is at the root of their success, posting 3 wins and an assist for 7 points and the Player of the Week nod.  He was the outright winner this week, there were a couple of players at 6 points, but it just wasn't enough, thanks to that extra assist.

Wins against Boston on Tuesday, Columbus on Thursday and Anaheim on Saturday rounded out his week, picking up the assist in the rout against the Ducks.

This brings Hellebuyck's totals up to 24 wins and 50 points in 40 appearances this season, good enough for 41st in hockey pool scoring, 4th among all goalies.  And as you will tell in the next section, he was a big reason why Jeremy's team did so well in the week.

Yes, Jeremy's team did hang on to the top spot for the Mover & Shaker in Week Eighteen, finishing with 26 points, 1 clear of 2nd place in the week, and his team moved up a couple of spots in the standings, going from 18th to 16th, and now his team is "only" 82 points behind 1st place. 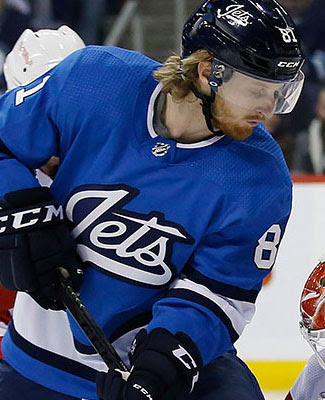 Hellebuyck's 7 points was tops on his team, which was the best total by a fair margin on his roster.  Kyle Connor of the Jets and Kris Letang of the Penguins each finished with 4 points each in the week, while Pierre-Luc Dubois of the Blue Jackets and Conor Sheary of the Sabres each had 3 points.

This has been one of the lone bright spots for Jeremy's season in thee pool, as his team hasn't had a great deal of luck, when it comes to the all-around game this year.  His team ranks 23rd in goals, tied for 8th in wins, 23rd in plus/minus, tied for 20th in skater games played and 15th in goalie minutes played.

16th place does seem to be a pretty reasonable ranking, when you look at it that way.  Hellebuyck has certainly been carrying his team all year and starting the third segment of the season 57 points out of the money, it is probably way too much of a climb to make anything of the season.

At the bottom of the weekly standings, it was a tie at 9 points, which needed a tie-breaker to determine a Basement Dweller.  Both Ryan and Neil each finished at 9 points in our return from bye week hell, so we'll first have a look at the goals scored... and by a margin of 4-3 for Ryan, Neil gets the honour of occupying the basement for this Newsletter.

Neil's team finished the week in 20th place, dropping down a spot from 19th, where he was for about three weeks.  He had three players tied for top spot on his team with 2 points, which left three other players with a single point each.

The second segment of the season wasn't very kind to Neil's team, as a whole, as it finished tied for 20th with 185 points from Week Ten to the end of Week Eighteen, where the leader of the pack finished with 242.

Now we're into the home stretch and Stuart is the clear favourite for the title this year, looking for back-to-back honours and as much as he's trying to be humble about it, that 20-point lead does look fairly safe for the last nine weeks of the season.

Stacey M. retook 2nd place for the time being, putting 5 points between her team and Grant's team, which now sits in 3rd.  Kristy & Don are 7 points back of Grant's team and Wes is 5 points back of the duo.  We've seen some real separation here of late, which is slowly taking all the excitement out of the game.  Hopefully these Waiver Draft picks can get the juices flowing again.

Derek B.'s collection of rookies are finally doing what they are meant to be doing as a collective, taking down the gap between his team and Clayton's for the rookie pool.  Derek's team posted 7 points last week, closing the gap now to 5 points.  Derek added a couple of rookie goalies to the mix, while Clayton also added a rookie goalie to his team, so the race will remain somewhat interesting down the stretch.

Not only did Jeremy's team take the Mover & Shaker, it also separated itself from the pack at the top of the shootout goals mini-game, as his team now has a clear lead at 7 goals, while the collection of teams with 6 goals looks on in awe.  This was Jeremy's first shootout goal since Week Eleven, all thanks to Kyle Connor in Winnipeg.

No game-winners for Stuart this week, so his lead was bitten into a bit by both Tony and Brian, each posting a couple of winners in the week.  Stuart's team sits with 35 game-winners, while the two teams chasing his now have 26.  There are another three teams at 25, with 467 games left to go in the regular season.

The Washington Capitals were without forward Lars Eller for Sunday afternoon's contest against the Boston Bruins, due to a lower-body injury. He was listed as a game-time decision before the contest, but was ruled out well in advance of the game. It wasn't a huge deal, since Alex Ovechkin came back from his league-imposed 1 game suspension for missing the All-Star festivities.

Not a big deal here for Scott, since he hasn't had much success from Eller since the Week Nine Waiver Draft, which is probably why he dropped him this past week.  Going forward, Eller will not be his concern.
Posted by opiatedsherpa at 11:42 AM