Well, I've taken my sweet time today to produce the Newsletter... it's a holiday in Alberta, so what's the rush?  I just wish there was some good news to report is all, it may have been out a little bit earlier, but we all know how the pool is going these days.  Gross.

It was an unprecedented start to the Newsletter this week, as we had ourselves a 4-way tie for the top of the individual scoring standings with 10 points each!  Two of them were on the same pool team as well!  That is absolutely mad!  Nikita Kucherov and Andrei Vasilevskiy of the Lightning and Sidney Crosby of the Penguins all fell to the tie-breakers in the decision process, giving Vladimir Tarasenko of the Blues his first Player of the Week this season, as he finished with 4 goals and 6 assists in four games this week.

Overall, it hasn't been one of the more dominating seasons from Tarasenko, but as we've seen in the last few weeks, he and his teammates in St. Louis are really starting to turn things up.  Currently, he ranks 65th in hockey pool scoring with 26 goals and 51 points in 57 games this season, so it's really coming along now.

Eric picked up the Russian sniper in the 2nd round of the draft, 41st overall, so the return hasn't quite been there, but a Player of the Week nod is showing that there is still some fight left in the winger.  There's still plenty of time to move up those spots.  Eric also has Sidney Crosby on his team, which gave him two options for this paragraph, which is almost unheard of, especially at 10 points.

Well, it's now just getting to be a bit ridiculous, as Stuart continues to just run away with the lead after the start of the third segment, as he now has both Mover & Shakers in the final portion of the season and all hope is really fading away. 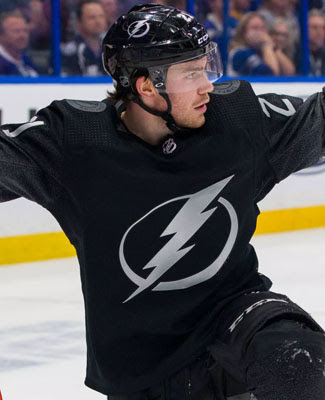 With a 41-point week in Week Twenty, Stuart's team now holds a 46-point lead in the overall standings, taking his third Mover & Shaker, which have all happened in the last five weeks.  It's been a disgusting amount of domination, which is leading to calls for an investigation into Russian tampering in the hockey pool standings.

Brayden Point of the Lightning and Patrick Kane of the Blackhawks led the way for Stuart's team in the week, both finishing with 6 points, while Brad Marchand of the Bruins and Thomas Greiss of the Islanders each finished with 5 points.

Every player on Stuart's active roster was able to post at least a point in the week, which has trumped a few teams that had 10-point players on their roster, because they weren't quite as consistent up and down the roster as Stuart's has been.

Currently, Stuart has three players above 70 points, which would all be taken in the 1st round of the draft, if we were to redo it today and that has been the leading reason for all of his success this season.  Picking up some found money in Anders Nilsson in Ottawa has certainly helped too, already posting 3 wins and a shutout in the last two weeks.

There's no investigation necessary for the tank job that Derek B. has been pulling off, he wanted those rookie points and those are pretty much all he has been getting in recent weeks.  His team finished with a pool-low 11 points in Week Twenty, 7 of those points coming from his freshmen players.  Flyers forwards Jakub Voracek and Oscar Lindblom led the way for his team, each picking up 3 points.

Derek's team is on the verge of taking over last place in the standings, as Scott's team has been coming up quick in the past week, making up 17 points on him.  His team only has 99 goals scored between all of his skaters this season, the only team not to hit triple-digits in the statistic and the team ahead of him, the last one to clip over the 100-goal mark, did it three weeks ago.

Will all this tanking pay off for Derek?  We'll see in a couple spots on this Newsletter.

Okay, so the lead is safe, much safer than ever before this season, Stuart appears to be cruising to his back-to-back titles, now with a 46-point lead over Stacey M., so we'll leave it at  that.

Stacey's team gave up some ground to the teams chasing hers, as Grant's team now sits 8 points back and Kristy & Don are 11 points back.  Wes' team fell off the pace in Week Twenty, now falling back to 31 points back of 2nd, but there's still time for a hot streak there.  If Steve can have another strong week, he might find himself with some more mentions here, as his team is now 29 points out of the money after a 29-point week.

There's still a little bit of intrigue left in this season yet.

Yes, Derek's 7 points from his rookies were more than anyone else in the week, as his lead has now improved to 7 points over Clayton's team, who could only round up 4 points from his one active rookie on his roster.  It's not over here quite yet, but it's getting close.

The pool is seeing a few more shootouts in recent weeks and it was able to collect 5 more goals in total in Week Twenty, but it was all single goals for five teams.  Grant's team was the most notable of the five teams, as it grabbed a piece of the tie for 2nd place with 7 shootout goals, joining Jeremy and John P., now just a goal behind Mike's team, which carries the lead for a second week.

It was a good week for game-winners, as Eric's team tied a season-high for a week this season, picking up 6 winners and his team shot up the mini-game standings, now in 3rd place, 3 goals behind Clayton in 2nd and 9 goals behind Stuart's team, who remains at 38 game-winners after not posting any this week.  This mini-game may still have some life left in it still.

The goon team of the week belonged to Stacey C., finishing with a pool-high of 40 minutes in penalties this week and I believe it was Darnell Nurse of the Oilers leading the way for his team this week, who had 19 minutes in one game by himself.

Stuart's grip on the overall lead in the goon pool is also slipping, as Scott's team is now only 7 minutes behind, making up 9 minutes in the week.  Scott's team has been in the box the most since the start of the third segment, so he may come away with some kind of mention before the end of the year.

There hasn't been anything terribly remarkable in the plus/minus department in recent weeks.  No records being set, good or bad, but Neil has since taken over the lead in the statistic, now with a combined +80 on the season, overtaking Wes' team in this third segment and now has a 10-point lead in the category.  Ryan's team has been on the other end of the spectrum, now a combined -68, 13 points worse than Stacey C. and 24 points worse than Jeremy's team.

Scoring took another up-tick in Week Twenty, improving to 13.67 points per NHL game, up from 13.16 the week before and 12.24 in the last week of the second segment.  The pool collected a total of 683 points in the week, coming from 50 games on the NHL schedule and of course, those four players tied with 10 points each certainly helped.

I was going to mention the team's save percentages as an interesting number in this season's pool, but Stuart leads that too.  Maybe I'll take a pass on it then.

An undisclosed injury had hampered Columbus forward Boone Jenner on Saturday night, when they took on the Blackhawks, but reports on Monday morning are showing that he will be dressing for this evening's game against the Lightning. The team did not issue any medical info on Jenner in this case, but according to some other reports, the flu bug may have been hanging around, so it could have been that, if one was to speculate. He'll be back, not much to see here.

Just one skater game missed for Steve's team last week, which still had a pretty good week.  His season has been pretty good and it still has an outside shot at some money, if everyone stays healthy.

The flu bug is running rampant on the Detroit Red Wings' locker room, as it kept Frans Nielsen out of Saturday's game, but he returned for Sunday's contest, while Gustav Nyquist was a body that had to come out for recovery.  It just looks like it's a simple case of the flu, down for a day and coming back.  I would imagine that Nyquist will be ready to go for the team's next game, Wednesday night, at home to the Blackhawks.

That's a skater game lost for both Scott's team and Kristy & Don's team, not much to see here and not much to panic about.  Kristy & Don may have missed that game a little bit more, since they are chasing the money, but Scott wants to be out of last place badly and he could have missed his game a bunch too.

The Florida Panthers have given permission to Roberto Luongo to take some time on bereavement leave from the team this weekend, as there was a death in his family.  The team expects the veteran goalie to be back with the team on Tuesday, missing out on a weekend contest against the Canadiens on Sunday.

Luongo should probably get the team's next start, Tuesday night against the Sabres, which is good news for John P..  It is likely a missed start for John's team, which finished the week in 14th place.  His team is 12 points out of the top 10, as a point to look for before the end of the season.

The Los Angeles Kings are in selling mode, as we head to the trade deadline, which is only a week away, and injuries to their blueline are only speeding up the process.  Alec Martinez was hurt last week and he is now expected to miss the next couple of weeks with an upper-body injury.  Martinez isn't exactly one of the players on the board for trading, but he would be useful in keeping the games exciting for the Kings, so it's a decent loss there.

Wilton's team took the hit on this piece of injury news, as his team now sits in the top 10, in the tightly-knit group between 7th and 13th.  Wilton's team had a good week, despite this injury news and looks to keep it going, as there is certainly wiggle room to get higher in the standings.

Another lower-body injury, confirmed not to be an aggravation of a previous injury, kept Dustin Byfuglien out of the Winnipeg Jets' lineup on Saturday evening, but the coaching staff believes that this new ailment isn't all that serious and he could be good to go for the team's next game on Wednesday night.  He's listed as day-to-day, not likely all that serious.

Dale C.'s team is also caught up in that tight-knit group in the middle of the standings, just ahead of  Wilton's team in 9th, 4 points clear of Wilton's team and only 3 points back of 7th place.  Anyone in this pack could have a Mover & Shaker week and really get back into the money race, but it would have to be a damn good week... or two.
Posted by opiatedsherpa at 11:04 AM