Well, I better hurry today... it's trade deadline day and there is already move in the books from the overnight chatting sessions.  It sounds like it could be a busy day, so let's hop to what last week looked like.

It was a big goalie battle for the Player of the Week, as all the major skaters finished with 7 points, instead of the 8 points required to earn the honour.  It came down to the tie-breaking process and by a 3-2 margin in the win column, Semyon Varlamov of the Avalanche topped Sergei Bobrovsky of the Blue Jackets to take home the crown this week.

Varlamov did register 1 shutout, a 40-save effort against Vegas on Monday, which he followed up by winning against Winnipeg on Wednesday and Chicago on Friday.  He's starting to turn the Avalanche back around, but is it too little, too late?  No, it's coming at the perfect time, the Avalanche are now only 1 point out of the last wild card spot in the west.

It hasn't been a great year for the Russian number one in Colorado, as the whole team fell into a major slide after such a good start and it really brought down his overall numbers.  After this really good week, the 30-year old still ranks 144th overall in hockey pool scoring, 23rd among all goalies, with 38 points in 41 appearances.  Certainly, you'd prefer to have your goalie well above the point-per-game mark.

Wilton, however, has had an okay return, not picking up Varlamov until the 3rd round, 75th overall, a ranking that the keeper could still reach, if the Avalanche continue on this hot streak of theirs, but it would have to be white-hot!

His first season in the pool already has a Basement Dweller nod, but now he can add a Mover & Shaker to the list, as Jesse's team has really been stepping it up of late and it swooped in on Sunday and snatched the title away from Stacey M., who almost ran a wire-to-wire campaign on it.  Jesse's team finished at the 40-point mark and shook his way up to 6th place in the process. 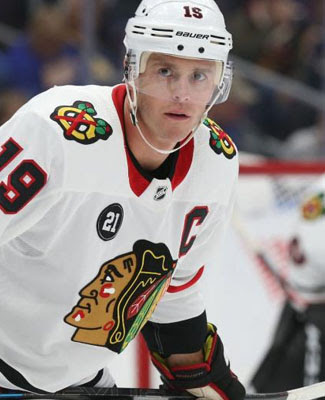 Jesse's team added a little bit of separation from itself to move closer to the aspirations of money group, now 3 points back of Wes for 5th place, but still 31 points back of the money, 12 points up on 7th.

Jonathan Toews of the Blackhawks and Gabriel Landeskog of the Avalanche led the way for his side this week, each picking up 6 points, Alex Ovechkin of the Capitals had 5 points, while Matt Duchene picked up 4 points between Ottawa and Columbus and Philipp Grubauer had a shutout for the Avalanche this week.  Only one player on his active roster failed to pick up points, but not for a lack of trying.

In terms of goal scoring, Jesse's team has been among the top three all season long, currently ranking 2nd in the pool with 201 goals, but still ranks 3rd in forward scoring with 373 points, 16th among defense at 89 points and 14th in goalie points with 67.  Having a top 10 defense and keeper combo would have probably seen him lift up to the money teams and it was something he couldn't quite fix at the Waiver Draft.

31 points is still quite a bit to make up, but we still have six more full weeks of action left and if his team gets hot right now, it might just work.

It wasn't Mike's week to shine in Week Twenty-One, as he couldn't quite find any traction in the final week before the NHL trade deadline, but he has seen one of his players move teams, so maybe that will kick the rest of his team in butt (as if they would know that it really mattered in this little ol' hockey pool).

Mike's team could only muster up 15 points and fell from 18th to 20th in the overall standings, 29 points away from the equator of 13th place, which does feel like a little bit of a stretch, but it's a good goal to try to attain.

Sam Reinhart of the Sabres was his best player in the week, finishing with 4 points, but seven of his players were not able to pick up points, only one of them due to injury, which is a bad sign.  Injuries, everyone can feel for, just plain ice cold though, that's a tough pill to swallow.  Mike's team was tied for 9th in skater games played this past week with 36 and had 164 minutes of playing time from his goalies to his name, so he certainly had his chances.

Mike's team is still in the running for his money back or at least some of it in the mini-games, but we'll save that for later!

We had lots of positive movement in the money/trophy race in Week Twenty-One, as the teams just below Stuart's all made up some ground on his team with big weeks.  Stacey M. and the duo of Kristy & Don each had 37 points to Stuart's 29 and even Grant's team came up with 33 points to shave off some.  Unfortunately for Grant, his team lost out on their spot in 3rd, giving it up to the duo.  The gap between 2nd and 3rd now just slightly increased to 11 points, which still makes it interesting.

Wes lost a bunch more ground on the money group, now 28 points back, but here comes our Mover & Shaker from the week, Jesse, who is 31 points back and coming like a bat out of Hell.

Derek B.'s stable of rookies are still putting up the numbers for his side, posting another 8 points and increasing the overall lead in the rookie pool to 15 points this week and there appears to be no stopping this group.  Oskar Lindblom of the Flyers and Rasmus Dahlin of the Sabres each posting 2 points led the way for his team this week.

Grant's team was among seven teams to register a shootout goal this week and his team moved up into a tie for the lead with Mike at 8 shootout goals this season.  Mike does have the tie-breaker of doing it in less shots, a better success ratio, 8-for-19, instead of Grant's 8-for-26.  Ryan, Wes and Clayton each had a goal to move up to 5 shootout markers this season, looking at outside shots for the money, but there is a pretty good logjam of teams there.

Stacey M. not only had a good week overall, but her team led the pool in game-winners this week, notching 5 of them, which is tied for the 3rd-best week in the pool this season.  That only brings her total up to 25 however, still 14 back of the lead.

Stuart still holds a 6-goal lead over Clayton's team, both teams posting a winner in the week, but no real movement up at the top this week.

The goon team of the week belonged to Steve's team, but only by a couple of minors, as his team finished with 30 minutes in penalties to lift his overall total up to 379, which ranks him 4th.

Stuart's team still leads all teams with 412 minutes, still followed closely by Scott's team, which is at 405 minutes.  Only a fighting major and roughing penalty away, that's pretty close.

Scott's team now also holds the dubious record of the worst week, plus/minus-wise, as his team was a combined -28 in Week Twenty-One, there was no attention to detail during 5-on-5 play for his side at all.  That means his team sunk like a stone to the bottom of the standings here, now a combined -60 this season, where our leader, Neil, picked up a few more positive points and now sits at +84.

Well, just in case you missed it on Sunday morning, Troy ended up taking this mini-game with a huge haul of points from the Flyers and Penguins at the Stadium Series game, the clear winner with 7 points between the two outdoor games this year, although he only had participation in one.

It was not a good week in the scoring department, as the pool dropped a whole point per NHL game in the scoring average, only taking 656 points from 52 games in Week Twenty-One, where last week, in 50 games, we saw 683 points.  Skater games were down, but goalie minutes were up slightly, there is just no consistency here.  What should we expect though?  The NHL schedule is all over the place at the best of times.

The Detroit Red Wings were without Thomas Vanek for their Sunday afternoon tilt against the San Jose Sharks, as the flu bug that has/had Jimmy Howard in its grips got to him as well. Both players actually were out of the lineup for the game against the Sharks, but there was a feeling about Howard, as mentioned in yesterday's goalie post. Both Vanek and Howard are candidates for trades out of Detroit today, so keep an eye out for that too.

That's a missed skater game for Stacey C. and another missed start for Tony yesterday, but the Red Wings are sellers today, so I don't think they are worried about that too much now.

Well, the day was looking promising for the Dallas Stars, they welcomed Mats Zuccarello into their lineup, Alex Radulov came back from illness, their new acquisition picked up a goal and an assist, but then the wheels came off a bit. First, Jamie Benn left the game with an upper-body injury, not to return. No update right after the game. Then, Zuccarello ended up blocking a shot in the 2nd period, also suffering a lower-body injury, not to return, no update. The good news, however, they still managed to pull out a 4-3 win over the Blackhawks, but it could be a costly one.

Radulov's return was good for Benson, Benn's injury now puts a hole in Chelsea's team and the same goes for John P., when it comes to Zuccarello.  John's team is the only one with any hope of hitting the top half of the standings, so he'll have the most to lose with this injury.

The Ottawa Senators are probably not done dealing yet, as they are still protecting assets or at least they were last night, when they took on the Calgary Flames.  Mark Stone was joined by both Mikkel Boedker and Cody Ceci, both have been rumoured to be on the market.  Today will be the last day that the Senators will have any interest in doing this, they'll have to move these guys or play them down the stretch.

Stone has already cost Wes a few games, waiting on a deal, while Boedker is Chelsea's and Ceci belongs to Ryan in this final segment.  The waiting game is never fun and Wes is having the worst time, since he still has his eyes on the money and he needs that deal done right away.
Posted by opiatedsherpa at 6:22 AM