It's a late edition of the Newsletter this week, I didn't get up in time to get it done bright and early... frankly, I didn't want to.  So, here we are... a later edition.  Can you believe, there are only a few more of these left to go this season?

For some reason, I'm not sure if it was a coincidence or not, but I was asking myself if there was ever a player that was injured in a week and still ended up with a Player of the Week nod.  I can now confirm that yes, that has happened, because it had happened this week.  Brad Marchand of the Bruins did not play on Sunday, because of an upper-body injury, but still had enough in the tie-breaker against Evgeni Malkin to take the title of Player of the Week for Week Twenty-Three.

In three games this week, Marchand finished with 4 goals and 4 assists to take his second title of the season, the first coming back in Week Sixteen.  He opened the week with a hat-trick and a pair of assists against the Red Wings on Tuesday, followed that up with a goal against the Flyers on Saturday and then a couple of assists against the Blackhawks on Saturday, before succumbing to an upper-body injury for the second half of a home-and-home against Chicago on Sunday.

This now brings his season totals up to 29 goals and 69 points in 53 games this season, good enough for 21st overall in pool scoring, just within the range of being a 1st round pick, if we were to do the draft all over again.  That's a pretty good return for Cam and his team, which selected him 32nd overall in the 2nd round at the draft in September.

There doesn't appear to be any stopping Stuart's team now, it is rolling along like a juggernaut at the top of the standings.  A 36-point week was not matched and barely challenged, once the weekend and sprung up.  His team was 4 points better than Neil's team in the week, his closest competitor, once the dust had settled. 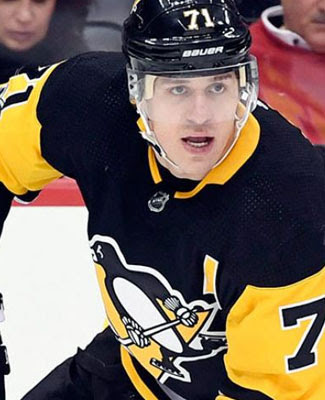 Having the other nominee for the Player of the Week certainly helped, as Evgeni Malkin has been running really hot of late, also finishing with 8 points, but only scoring 3 goals to fall to the wayside for top billing on the Newsletter.

Both Sidney Crosby of the Penguins and Roberto Luongo of the Panthers each had 6 points in the week, while Torey Krug of the Bruins had 5 points and Keith Kinkaid of the Devils rounded out the major scoring with 4 points.

Stuart's team has been riding an incredible wave, leaving everyone in the dust since the start of the third segment of the season, now having already posted 178 points through the first five weeks of the final segment, 19 points clear of the next two teams on the list and his team had already started the segment in 1st place, so it has since become quite the runaway train.  Both his forwards and goalies (Luongo and Kinkaid) lead the pool in positional scoring in this segment and I don't think that there is any team out there that can catch his team in the last four weeks, barring a meteor strike that knocks out most of his team.

The race for the Basement Dweller was hotly contested by a number of teams, as two teams finished with 16 points in the week, while six more teams were only within 3 points of the bottom ranks.  Still, we need to have ourselves another tie-breaker, Dale C. versus Stacey C. for the right to bring their sleeping bags down to the lower depths of the week.

The great tie-breaker... goals scored!  The two sides were tied, 6-6 in goals scored... so, now we move on to wins!  Oh no... both teams failed to register a win now too!  How rare is this?  Well, next up on my own ranking tie-breaker... is games played!  The most representation in the week, saves itself from shame.  In the skater games department, by a margin of 33 to 32... Stacey C. is free and clear and Dale C. gets to bunk in the basement!

With all that tie-breaking, I'll just inform you all that Dale's team was led by Phil Kessel of the Penguins in the week, finishing with 4 points, but no points from his goalies and three other skaters were really holding his team back, pulling it into the basement for the week and will need a bounce back week, if his team wants to finish in the top 10 by the end of the year.

The race for the trophy (and the money) continues to spread itself out thin and there really isn't a whole lot of intrigue left in it.  Stuart leads Dale B.'s team by 29 points now, Dale leads Benson by 18 points and Benson leads Grant in 4th place by 35 points.  This is quickly becoming how the top three are going to finish... again, barring that meteor strike.

At least the Plus/Minus pool still has a little bit of intrigue left in it, as Steve's team has given up a giant lead it once had, even giving up the lead in the middle of the week, but did recover enough to retake the lead for the Newsletter write-up.  Steve's team finished with a +1 rating in the end after Sunday's action, while Dale B.'s team finished with an even rating, still sitting 3 points back.  Brian's team came on strong in Week Twenty-Three, finishing with a +7 rating combined in the week and now sits 10 points back of the mini-game lead.  That's pretty interesting.

Wes' team has put down another solid effort in the week, 16 minutes worth of penalties kept his team's lead at a healthy 82 minutes over Grant's 2nd place team. Both Neil and Stuart shared the goon team of the week nod, each posting 21 minutes of penalties, in what was somewhat of a lame week for trips to the box. The pool only combined for 284 minutes in total, the 3rd-worst week of the season. Where's the fun in that?

The rookie race has perked up a bit, now that it is a 3-team race to the finish.  Cam's team of freshmen posted 9 points in the week to take the overall lead in this no-prize mini-game, as his team now leads Chris and Clayton's team by 4 points, 99-95-95.  Jake DeBrusk of the Bruins and Will Butcher of the Devils were Cam's meal tickets to the big week and the 4-point lead.

Week Twenty-Three was a dud week in most every statistical category.  Points were low... a combined 573 between all 25 teams.  Participation levels at both the skater and goalie positions were also down and I've already noted that the penalty minutes were significantly down... it's like everyone is now coasting to the finish.

Is it time for the playoffs yet?

Did you read about Brad Marchand's upper-body injury in the Player of the Week paragraph? I'm probably not going to repeat much more of that, since we've already seen it. He's day-to-day, that's about all we know anyways

Posted by opiatedsherpa at 9:46 AM