The Colorado Avalanche revival has been built on the shoulders of Nathan MacKinnon, as the 2013 1st overall pick has been putting together the season that we have all expected from him for a while now.  His Week Twenty-Two was the best of the season, so far, and the Avalanche are only a point out of the Western Conference playoff picture, only a season after being the laughing stock of the league last year.  MacKinnon posted 11 points, the 2nd 11-point week of the year (pool-wide), leading his Avalanche closer and closer to that playoff appearance.

There's no doubting that MacKinnon had it in him, but his stock was quite low at the start of the season, especially since Tony was able to snag him with his 3rd round pick, 75th overall, so he's turning out to be quite the bargain pick this year.  Buy low, collect high!  The Avalanche star was doing a great job keeping Tony in the Mover & Shaker race this week, but it just wasn't to be.

No, the Mover & Shaker race, as good as it was, got a stunning finish from Eric's team, which dominated Sunday's play and finished off with 43 points, the only team in the week to finish above the 40-point plateau, and was 5 points better than his team's nearest competition.  The big week also got his team on the move, as it finally broke free of the shackles of 21st place, where it sat for a few weeks, jumping up to 19th and now has eyes on 15th place, assuming it can continue this roll. 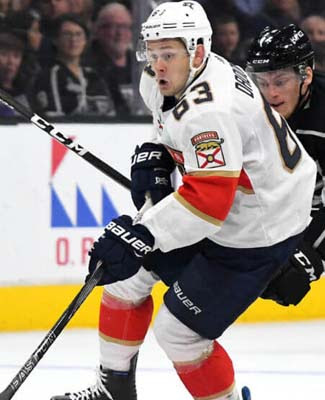 It was a complete effort from Eric's team in the week, as his side was able to post points from all 14 active players, so it should come as no surprise that his team was able to take top spot in the weekly scoring.

Evgenii Dadonov of the Panthers led the way with 6 points in the week, which is pretty good for his Week Eighteen pickup.  Evander Kane's move to San Jose has been profitable for Eric's team, as he was next on the scoring list with 5 points, a very positive move at the trade deadline, indeed.  Five more players each finished with 4 points a piece and he was also able to get a win from both of his goalies this week, Anton Khudobin of the Bruins and Juuse Saros of the Predators.  That's just how well things went for his team!

It's too bad Eric's team couldn't string together this kind of scoring earlier in the season, as the last few weeks have been great.  His side now ranks 4th in the final segment of the year, which started at the start of Week Nineteen.  His team has seen 127 points in the last four weeks, only 15 points off the current leader in the segment.

Eric's forwards have been good this year, also ranking 4th overall in pool scoring with 358 points, but his team has had no support from the other two positions, 19th in defenseman points and 24th in goalie points.  Either his forwards needed to do more or he needed just a little bit more from the back end.  Nevertheless, everyone came together and had a great week, so he can hang his hat on that.

Unfortunately for Wes, this is his third trip down to the lower level of the weekly standings, his last trip down was back in Week Nine and his season just couldn't recover.  Wes' team finished the week in 21st place and the power outage in the scoring department could see his team drop even lower in the overall standings, as there are a couple of teams in his immediate vicinity.

A high ankle sprain to Jack Eichel of the Sabres has been his real crux in this last third of the season, but his week was held afloat by Mikko Koivu of the Wild, who finished with 5 points to at least get his team to the tie-breaker this week, otherwise it was going to be a disaster.

Eichel has just started skating again, so maybe his team can stay put in the standings, although it is only 9 points out of 20th, so there could be that going for his team... maybe?

The top three do seem to be rather locked in now, especially with five weeks left to go in the season.  Stuart and Dale B. each found their teams shooting out the lights, posting 38 points each and they were running away from Benson's team, which only put together a 26-point week.  Stuart still leads Dale B. by 19 points and lots can happen in five weeks, but it's looking pretty solid at the moment.

3rd to 4th place is now 38 points and Grant is the current placeholder of the top spot outside of the money.  13 points is all that separates 4th from 9th place and we all know that a really good week can really shift the balance of power in that group.  It's a good race, but it's too bad it's not worth anything in our wallets.

Remember when we thought Steve's team was absolutely locked in for the plus/minus money?  Do you also remember when I said that this statistic is extremely volatile?  No?  Well, I did and Week Twenty-Two is the proof in that giant bowl of pudding.  Steve's team was a combined -10, while Dale B.'s team was a +5 and now the lead has dropped down to only 2 points!  Hell, even Cam's team was a +10 in the week and now sits 13 points back and this race has really heated up and is far from over with five weeks to go.

Brian's team posted a +19 rating in the week, which is tied for the 3rd-best weekly rating this season.  His team jumped up to 4th in the rankings, 16 points back of Steve's team.  Very interesting!

Usually, I would want to do an entire post to the review of the last outdoor game, but I frankly, I wasn't feeling it. The Stadium Series game between the Maple Leafs and Capitals was a bit one-sided, the Capitals making good use of a quick ice surface, out-skating the Leafs and thusly, outscoring the Leafs, 5-2.  Tony's team entered the night with the lead in the non-competition and his defenseman John Carlson finished with 3 points, padding his lead and taking the honours of the best hockey pool team on outdoor ice this year with 8 points in four player appearances.  That's worth a hearty handshake next time I see you, Tony.  Well done.

What a great week!  A new combined scoring high in the season for our modest 25-team pool, as they all combined to break the 700-point barrier for the first time this season, 708 points, to be exact.  51 NHL games were played this week, that works out to be 13.9 points per game, which is the best average since Week Fifteen.  This is all quite impressive, since our participation levels were not great, especially in goal, where we registered our 3rd-worst week in goalie minutes played.  Go figure!

As it turns out, the Nashville Predators were not just resting players this weekend, rather injuries are to blame for some key players sitting. Defenseman Roman Josi is dealing with an upper-body injury, but it doesn't sound like it is anything too serious. Forward Craig Smith was getting some "maintenance days" this weekend and he didn't play again on Sunday either. I'm sure if we were in the playoffs already, both players would have dressed, but with the team firmly in the Central Division playoff picture, they're in no need of exacerbating injuries, rather they can spend some time and heal them up.

Of course, that doesn't help Kristy & Don or Dale C., but maybe down the stretch, when the games are getting into playoff mode, both players will be ready to throw down and put up some points, as they get geared up for the tougher hockey.

There's some concern that New Jersey Devils rookie forward Jesper Bratt may have hit a wall and that's a fair concern. The NHL season is a long grind and that first season can be a grind for some, so a healthy scratch isn't a horrible thing at this point. Bratt got the night off on Sunday, when they took on the Golden Knights and he could probably still get another game or two, as he tries to right the ship, both physically and mentally. It's been a great season for him regardless, 34 points in 64 games this season, no one saw that coming at the beginning of the year.

Ryan managed to pick up the Devils rookie at the Week Nine swap and he has collected 17 points in 38 games since his activation, so a quick mental reprieve could do him some good. Ryan's team sits 6th in the rookie race, only 3 points behind Eric's team for 5th in the race and Bratt has been a great add to keep Ryan's team in the race.

The Vegas Golden Knights just keep on rolling, despite the injury bug still chomping away. Shea Theodore was able to return from his injury on Sunday, but it sounds like Nate Schmidt might miss some time, as there are reports that he didn't make the trip with the team on their eastern swing, due to an undisclosed injury. He's considered to be day-to-day, but it's hard to say what he's actually dealing with and how much time he'll actually miss. Stay tuned.

Chris' team is in the top 10 race these days and his team finished the week in 9th, thanks to a decent weekend. You can say that his team is still looking at that 4th spot in the standings, probably the highest anyone is going to get, since no one is going to catch the top three. Chris' team will begin Week Twenty-Three 13 points back of 4th, but he'll be down a defenseman to start. Not a horrible fate, but not great either.
Posted by opiatedsherpa at 6:08 AM