The 2019 regular season is now in full swing and this occasion gets marked by the opening Newsletter of the season, which thankfully drops on a holiday Monday, where I can sit down and get the better part of it done in peace.  The format remains the same, we'll get through the top performers of the week, we'll talk the money race and we'll have a look at how the mini-games are shaping up as well.

Welcome one and all!  Don't forget to check back every Monday morning for the week's report and see if your player or team made the headlines.

The year of the Maple Leafs could very well be in full swing after a big Week One performance from Auston Matthews, as he kicked off the season with a huge bang!

Matthews led the blue and white gang with 5 goals and 8 points in the opening three games of the season, which consisted of a 2-goal opening night against the Canadiens, goal and an assist against the Senators on Saturday and then 2 goals and 2 assists against the Blackhawks on Sunday night.  He appears to be really fired up and ready to go, which could be bad news for the league and for the rest of us poolies.

This is back-to-back seasons where Benson has had the Week One Player of the Week nod now and his start gets even better, if you continue reading here right away.

Despite not having any goaltending at his disposal in Week One, Benson's team still managed to pound out 30 points and take a pretty good early lead in the overall standings.  It wasn't quite as dominating of a start as Jeremy's start was last season, but it certainly ranks up there.  Still, Kristy & Don managed to keep pretty good pace, only sitting 2 points back in the race and they were certainly in it for the better part of the weekend. 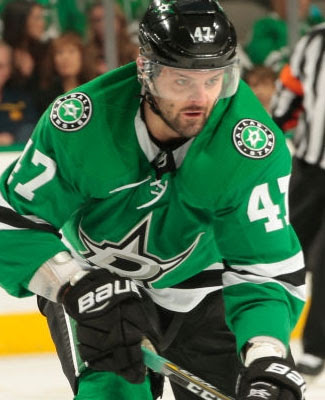 Last season, Benson was our 2nd place finisher, well short of picking up the trophy, but much better than the rest of us.  This year, he's aiming to finally get his own name on the trophy, instead of stealing it and trying to deface it by put asterisks all over it.

Matthews was top dog on his team in Week One, finishing with 8 points, as we all saw above, but he also had great weeks from Alexander Radulov of the Stars, Patrick Marleau of the Leafs and Jakob Silfverberg of the Ducks, who all had 4 points, while Tyler Toffoli of the Kings and Erik Johnson of the Avalanche both had 3-point weeks to help him out.

Out of his 14-player roster, five of his players were not able to score any points in the opening week, as mentioned, neither one of his goalies got a game in, one was injured and the other's number wasn't called, so this makes it a very unique Mover & Shaker nod, as it rarely happens without some help from the crease.

If we're looking for more parallels to last season's start, Brenda & Seward were also in this position at the end of Week One (and Week Two), coping with very little offense from their group of 14 players and wondering how that can all turn around for them.  Unfortunately, with only 6 points in tow, it is a few points worse than their start last year, where they finished with 9 points in the opening week.

On the bright side from last season, they really embarrassed the lot of us, by not only digging themselves a hole last year, they managed to climb out of it and climb up the standings, finishing 7th, 41 points out of the money.  For their sake, I hope they can turn it around much quicker and make up that ground or else it's mini-games for them!

Kyle Palmieri of the Devils and Martin Jones of the Sharks were their top performers, each picking up 2 points in the week.  Deciding to take on the unsigned William Nylander in Toronto and an injured Christian Dvorak in Arizona didn't help their cause any, as they were two players of 10 that didn't pick up any points for them in the week.

Next week... it'll all turn around next week!

Usually, this is a bit of a redundant part of the post in Week One, but we'll do it anyways.  Benson's team leads at 30 points, Kristy & Don's team sits 2nd at 28 and then there is a pretty good drop off to Jeremy's team at 23 points for 3rd place... and then the race really picks up again.  11 teams are within 5 points of Jeremy's side and now we'll get into our first full week of the season.

At the draft, 15 teams picked up rookies, unknowing that the rookie pool would indeed get spun on the mini-game wheel, two of them were dropped in the preseason Waiver Draft and a couple more were picked up at the same time.  Clayton and Jesse lead the way with three rookies each, but it's Clayton's team that saw the early benefits, picking up 9 points, thanks in large part to Elias Pettersson of the Canucks who had 5 points.

Also having 5 points and vaulting his team into 2nd place in the race, Henri Jokiharju of the Blackhawks lifted Brian's team right into the thick of the race and if he can keep that sort of pace up, Brian might have a good go at it at the Waiver Draft to give Clayton a good challenge this year.

After Week One, I'm really having some reservations about this mini-game, as there were only two shootouts in the week and teams seemed to have figured out ways to score goals in overtime.  I mean, that's kind of a good thing, given how no one really likes the shootout, but I thought if we were going to be stuck with it, we should at least use it somehow.

So, it landed on the wheel and this is what we're stuck with.  After Week One, only two shootouts happened in the league, 11 players had shootout attempts and only three players had goals.  For Troy's team, he had three of those shots and a couple of those goals, so he starts the season with the early lead in the skills competition mini-game.

I did have one question asked between the mini-games and it was "do game-deciding goals in the shootout count as game-winning goals as well?"

The answer is no.  Statistically, the game-winning goals are only counted in regulation and in overtime, so they are separate stats.

Of the 31 games played in Week One, minus two shootouts... the pool still collected 20 game-winners in the week, leaving nine out there in statistical limbo, not for us to collect upon.  That's still a pretty good turnaround.  Sadly, Benson leads in this category as well, his team managed to collect three winners, but five other teams are right there with two each.  13 teams in total were able to collect a winner, so this could be a fun race through the next 26 weeks.

From time to time, I will touch briefly on previous mini-games, just to see what would be happening, if we saw them land on the wheel.  The first being penalty minutes... Stuart's team got off to a huge lead, thanks to Brad Marchand of the Bruins getting 19 minutes on opening night.  Grant's team came close to matching that one game total through the week, but still sits 11 minutes behind, 27-16.

20 of 25 teams would have survived Week One of the goalie survivor pool, if it was a thing this year.  Benson, Jesse, Ryan, Steve and Tony would have all been eliminated, thanks to their goalies either not playing or not playing well enough.  This is the first year in the mini-game era of the pool, where the survivor pool wasn't a part of the season and it might be missed.

Pool newcomer Chelsea saw her team play very well at both ends of the ice, ranking 5th in overall scoring and tops among the plus/minus with a combined effort of +17 through Week One.  That total was 4 points better than both Benson and Neil for top spot.  She can certainly thank her tandem in Dallas for the good start, as Jamie Benn and Tyler Seguin were +4 each to start the year.

I do like some comparables, when it comes to hockey pool stats and since we have made it three straight seasons with 25 teams in the hockey pool, that means we can have some direct comparisons to start the year.


None of the stats seem to be very far away from each other, so I suppose we could just call it all average.  We picked a good bunch of healthy players and goalies, so that's a plus, but we're not setting any records this year, so that's kind of disappointing.  Here's hoping that all the recent injuries don't hamper our numbers too badly in Week Two.

I do have some more news and notes to touch on, but first, I have to get that goalie post out... I think.
Posted by opiatedsherpa at 10:50 AM