We're jumping right into it this week, kind of like how the Colorado Avalanche took it to the week that was in Week Three, jumping all over it.  It was a tie between two Avalanche teammates for the Player of the Week nod, but since Gabriel Landeskog did all the goal scoring this week, he had the tie-breaker all to himself over Nathan MacKinnon, as both players finished with 7 points, but Landeskog lit the lamp more.

On Tuesday, the 25-year old started the week with a goal and an assist against the Rangers, followed that up on Thursday with a hat-trick against the Devils and then scored another pair of goals on Saturday against the Hurricanes.  6 goals and 1 assist in the three games in the week and there you have your Player of the Week nod.

The big week now gives the Avalanche captain 7 goals and 10 points in eight games this year, ranking him 21st in pool scoring through Week Three, which would make him into a late 1st round pick, if we were to redo the draft today.

In the pool, Jesse took him in the 3rd round, 69th overall, so there is a pretty good bargain pick unfolding here, especially if he could keep up this pace.

It was a great race, right down to the wire, for the Mover & Shaker nod, and it was Sunday's play that finally decided our standalone winner, no tie-breakers needed this week.  Grant's team finally woke up in this season, having gotten off to a slow start, taking the Week Three nod and climbing his way back into the money conversation with 32 points.  It was somewhat a low-scoring week, so any team that could find points was really going to make the most of it. 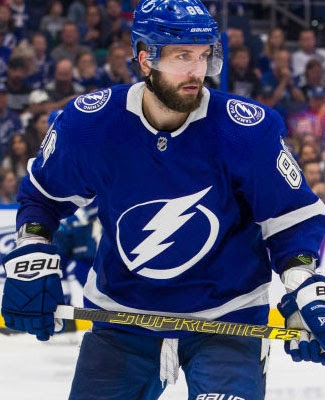 Grant's team jumped up the standings, from 19th place to start the week, all the way up to 9th and is now 11 points back of 3rd and 12 points back of 1st place.  If his team can somehow keep this pace going, it will be firmly in the money before too long.

Nikita Kucherov of the Lightning and Keith Yandle of the Panthers led the way for his side in Week Three, both finishing with 5 points, while Jack Eichel of the Sabres was next up with 4 points and three more players finished with 3 points on his team.

Three players on his side failed to pick up points in the week, one was due to injury and the other two were just cold weeks, so there is still room for some improvement in his team, which is scary to think.

Grant's team hasn't been all that statistically impressive quite yet this season, ranking last in goalie minutes played, with one of his keepers starting the year on the shelf and the other is a back-up, while his skaters are only tied for 6th in games played, but did lead the pool this week in those games being played.  His team is full of players that didn't have a lot on the schedule in the first two weeks, so now they're playing catch-up and the points are starting to trickle in.  We'll probably be hearing more from this team in the future.

Despite quite a few of her players seeing some points this week, Chelsea's team just couldn't string together larger amounts of points in the week and she finds her new team in the hockey pool down in the dreaded Basement Dweller spot for Week Three, having dropped nine spots in the draft, 11th to 20th, thanks to only a 13-point week.

Five of her players were able to post 2 points each, a victory from both of her goalies and some decent returns on the blueline, but there wasn't much from her forward group and that really cost her side all of those spots in the standings.  Having both of her Dallas Stars superstars, Jamie Benn and Tyler Seguin, each come up empty in the week, has to be the biggest disappointment, because it will be those two players carrying her side for the better part of the year and this is the sort of thing that happens when their offense dries up.

Her team did start the season in 5th place, so there is certainly some hope in her side to do some pretty big things, but she'll need her forwards to wake up and get going again, if that's going to start working in her favour again.

Troy's team was one of a few teams in the hunt for the Mover & Shaker nod this week and his team was just short of that prestigious honour, but what his team was able to accomplish was a jump into 3rd place, actually a tie for 2nd, losing out on goals, but a great week nonetheless, adding his name to the trophy talk conversation.  Neil finished the week as our new leader in the pool, up with 79 points, while Benson and Troy are only 1 point back at 78.  Kristy & Don had an average week, dropping back a bit at 71 points, while Steve rounds out the top five at 70 points.

The race is exceptionally tight, as 15 points can get you from 3rd place to 14th, and all that needs is one exceptional week to get the job done and climb into a money spot.

Quiet week in the rookie pool, as there were only 15 points scored in this mini-game altogether and the mini-game leader, Clayton, continues to hold a pretty big lead, 12 points to 6 points, over Stuart and Steve through three weeks.  Clayton's team did get 2 points out of Red Wings defenseman Dennis Cholowski to at least have something on the board.  2 points was tops in the mini-game this week, shared by five teams in total.

The shootout reared its head a few more times in Week Three and numbers were starting to get posted among the teams in the hockey pool.  In total, we saw 10 shootout goals in the pool, both Ryan and Neil each had a pair in the week, joining Troy atop the mini-game standings, all three teams now have 2 goals each to lead the way.  Nine other teams have seen goals in the skills competition, while 20 of the 25 teams in the pool have seen at least one shot attempt this year.  Troy and Jesse's teams lead the pool in attempts with 4 tries each.

The game-winning goals stat is a little bit more active, as we saw 30 game-winners reach the pool in Week Three, coming from 44 games in the week.  That's a pretty good collection of goals to games in the week.  Leading the way in the week were Stacey C. and Stuart, each picking up 3 winners, but neither of them were able to catch the Week Two leaders, Benson or John P., each of those teams getting a single winner and leading the mini-game at 6 game-winners in total.

Penalty minutes were definitely up in the hockey pool this week, even in the non-paying mini-game that it is.  Scott's team was the goon team of the week, finishing with 32 minutes in penalties, while Stacey C. and Wes now share the overall lead in the goon squad competition, now at 59 minutes per side.  There were definitely some good dust ups in the league this past week and we were all there to capture something from them.

If the goalie survivor pool was still a thing this season, both Clayton and Derek B. would now be eliminated from said competition, as their goalies failed to register a win in Week Three.  This brings our participation level down to 17 of 25 teams, still managing to get the job done.  Mike's team is currently the favourite of the bunch to possibly get acknowledged for having the best team in this competition, there's no winning anything, but his team has 7 wins out of the first three weeks, which is the best out of the bunch, so far.

Scoring was drastically down in Week Three, as our average participation in each of the games in the week did drop down as well.  There were 44 games in Week Three, but we only collected an average of 12.75 points per game in the week, down from the Week One windfall of 14.4 points per NHL game, thanks to our skater games going down from 18.5 to 17.6 per NHL game.  It doesn't seem like a whole lot, but the Mover & Shaker only finished with 32 points, so it does tend to add up.

The league does also tend to tighten up when we get to the third and fourth weeks of the season, the coaches in the NHL really do tend to start earning their money at around this time.  No coach wants to see those high-scoring games, they want to see their teams play some actual defense, more often than not.

Neither David Backes or Charlie McAvoy were feeling all that well on Saturday, ahead of the Bruins taking on the Canucks in Vancouver for one of the late games on Hockey Night In Canada. McAvoy was sent home, back to Boston, while I believe Backes is still with the team, both considered to be day-to-day with undisclosed injuries, but Backes may be upgraded to questionable, as the Bruins do finish up their road trip with a stop in Ottawa on Tuesday night. The Bruins return home on Thursday and we might hear more about the injuries then, but for now, it's exactly what you see here.

Backes belongs to Dale C. in the pool and McAvoy belongs to Brenda & Seward, neither side can ill-afford to see these two players out of the Bruins lineup for too long.  Neither of these two teams are off to good starts this season and injuries are only making things worse.

It looks like Islanders forward Anthony Beauvillier has moved from the team's top line to the team's press box in the matter of a week, if I'm reading some of these reports correctly.  The 21-year old saw some time with the team's top players, but a lack of production saw him take a trip upstairs on Saturday night, as he sat as a healthy scratch.  The team was obviously trying to get his scoring started with the move, but since that didn't work, his 0 points in six games played got scratched.  The Islanders don't play again until Wednesday, lots of time for extra practice work.

Also in the healthy scratch department, Ryan Spooner of the Rangers was also in the press box on Sunday night, when the Rangers hosted the Flames.  Spooner hasn't exactly gotten off to a good start in the season either, having only 1 assist in his first seven games of the year.  Expectations were pretty high for the 26-year old, who came over from Boston last year, but it just hasn't panned out quite yet.  Maybe the scratch will be what he needs to get his season going finally.  The Rangers host the Panthers on Tuesday.

Both Beauvillier and Spooner belong to Kristy & Don this year, who have excelled this season, despite a couple of slow starts like these two.  They probably would have enjoyed seeing some points out of either (or both) this week, so they wouldn't have such a gap between their side and the money teams, heading into Week Four.
Posted by opiatedsherpa at 6:36 AM