Ryan Miller, Pekka Rinne, Karri Ramo and Jaroslav Halak all entered the Thunderdome, but who would emerge as the Player of the Week?  All four goalies had 8 points in Week Eight, leading the way, but we must go to tie-breakers to know who is at the top of the heap.  The first tie-break in the pool is goals and it is safe to say, they have none.  The second is wins, so we can eliminate both Miller and Ramo, thanks to having 2 wins and 2 shutouts each.  You would think that would be better for them, but it's not.  In order to get my player rankings at the year's end, I think of it as a benefit to having players to play more, instead of doing more, playing less.  So with that being said, with a difference of one minute and 32 seconds, Halak earns the Player of the Week nod.

As mentioned, Halak went 3-0-0 with 1 shutout for his 8 points, shutting out the Flyers on Monday, beating the Capitals on Wednesday and then downing the Devils on Saturday for his week.

Halak has also been bumping up his own stock in the overall scoring ranks, now sitting in 7th overall, with 31 points and earning points at a 1.94 points-60-minutes clip.  It is quickly starting to be the year of the goalie, however, since Halak still ranks 4th among all keepers.

The Slovak keeper has been a real bargain for Tony, who took him 37th overall, and now ranks 30 spots better than his draft position, more than a round better.

I think Dale B. is getting used to his time on the Newsletter, because now, after a couple of Basement Dwellers in back-to-back weeks, he jumps back up, thanks to a 32-point week.

Dale jumped back up to 13th place, the spot that he vacated during Week Seven, thanks to his big week and now his team only sits 3 points out of the top 10 and 28 points out of the money, something that is definitely attainable, assuming that his two picks in the Waiver Draft send him barreling in the right direction.

Dale had a good week from Jimmy Howard of the Red Wings, who came close to the running for the Player of the Week, picking up 7 points.  Also coming out of Detroit was Henrik Zetterberg's 6 points, while T.J. Brodie picked up 5 points and Mikko Koivu had 4 points for the Wild.  There were a few donuts on his team, a couple of which will definitely be rectified for Week Ten, but his big names came up big, which is exactly what he needed to climb back into the race.

Statistically, Dale's team is just below average in both the skater positions, but his goaltending has been good this season, working well above average, but not exactly among the top three teams.  He'll need a bit more consistency from his skaters to get into the money, but I don't think it is out of the question this year.

No one should really want the Basement Dweller nod at any time, but the Week Eight edition tends to hurt a little less, especially when your standing in the first Waiver Draft improves and in Wes' case, improved by three positions, as his team went from 9th to 12th in the standings and is actually tied with Dale B., who we looked at in the Mover & Shaker spot.

Wes had a good week from Tommy Wingels of the Sharks, picking up 4 points, but that's about where the good news ends for his team.  No points from his goalies, six singles and a couple pairs, giving his team one of the better basement totals of the season and he only stands 4 points back of the position he lost, which can easily be made up in no time.

What does Wes have up his sleeve for the 12th overall pick in the Waiver Draft? 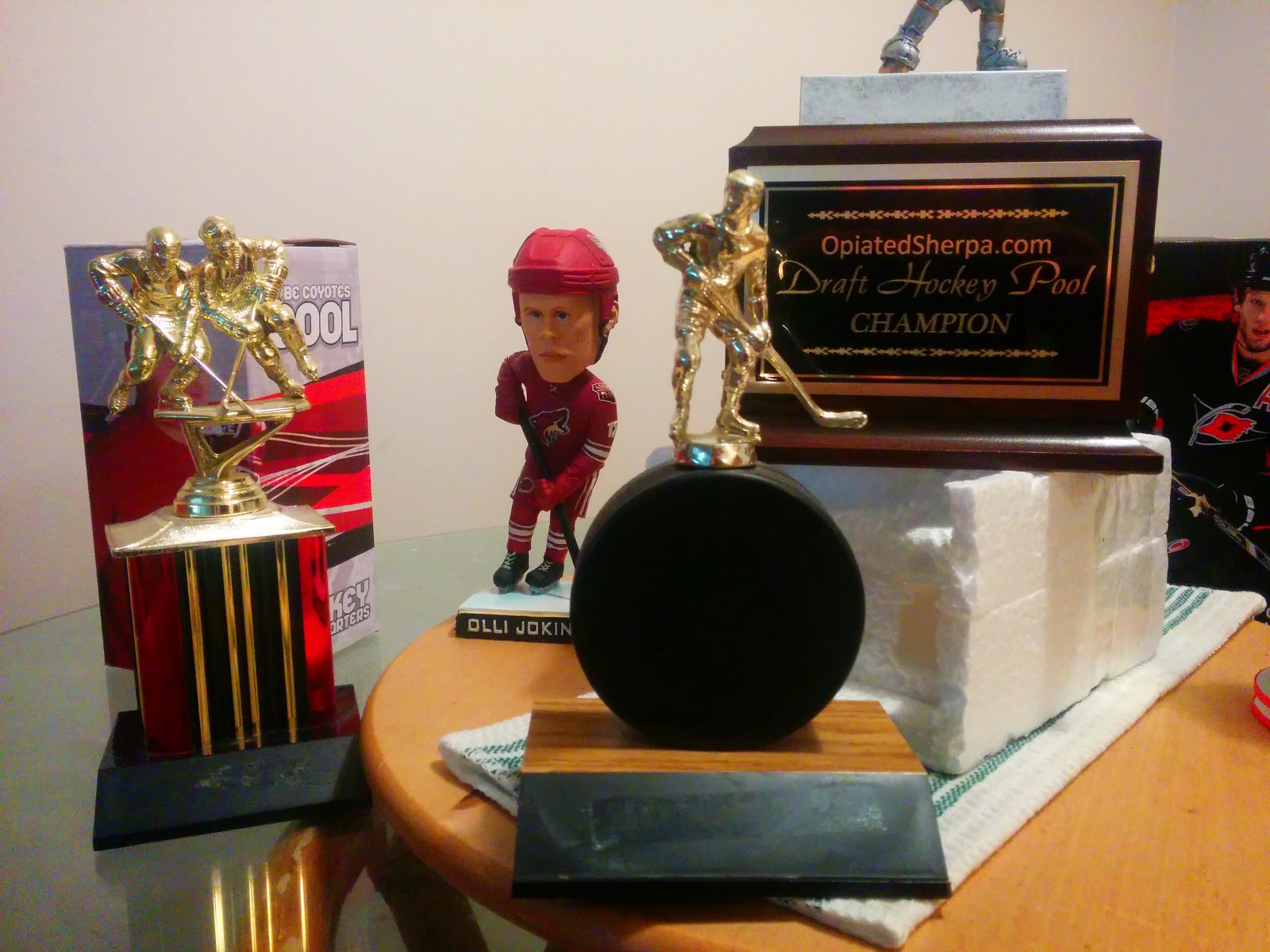 Well, the first trophy is almost ready to be handed out, as we have one trophy to hand out next week, the little guy on top of the puck will be our first segment trophy, given out for the first time in pool history.  It's a two-horse race, between Kristy & Don and Grant, as they battled for the early part of the season and earned their way to some early hardware on the year.

The week of the Waiver Draft is generally the last week of eligibility for scoring in the segment and it doesn't look like anyone is going to catch those two.  The winner of this trophy would have the overall pool lead after nine weeks, so that's something to marvel as well.  The pool duo have a 1-point lead in the category, so this race will come down to the wire.

It's not a trophy, but in the money, Dale C. jumped back over Clayton and took a 5-point lead, thanks to a big Sunday from the Red Wings and Canucks.  Those two are currently segregated from the rest of the standings, 25 points behind the top two and 9 points up on 5th place.

In other trophy news, Benson, who is picking first in this week's Waiver Draft, has the early lead for the Olli bobblehead and with only 25 skater games played, has the lead for the Jordan bobblehead as well.  Two things he'll be looking to improve upon in the Week Nine festivities.

Here was an odd one... scoring went up from the week before, despite both the skater games played and goalie minutes went down slightly.  The pool picked up 16 more points, while losing 11 games and 78 minutes of play, so in essence, 12 games.

Week Nine will be a busy one, as there is 49 NHL games on the docket and the last time we saw that many games on the schedule, the pool averaged 11.04 points per NHL game, while this past week saw 11.22.  Let's hope we keep pace (or surpass it) for a huge week in the points collection.

Last week, I started a new section, watching the teams that can register a win every week of the year, see who may be the last team standing in the category.  At the end of Week Seven, we still had 12 teams in the pool with at least one win every week and this week, we had a couple of eliminations.

Grant K. and Wes each failed to pick up a win, as their streaks ended at seven weeks.

I wonder if I can find a trophy for this one... that'd be cool, right?

There is some movement on the Brandon Dubinsky front in Columbus, as his status has been upgraded to day-to-day, but he remains out for tonight against Florida,  Dubinsky is now being considered as day-to-day, but will be on the IR until he's ready to go.

This isn't great timing for Dale B., who should definitely be considering the drop of Dubinsky.  Dale, who picks soon after the Newsletter drops, will have some consideration to do.

Travis Zajac has been placed on the Injured Reserve, according to the Devils on Monday morning.  Zajac missed some weekend action with a lower-body injury, but the team didn't exactly specify the time he is expected to miss.  By being placed on the IR, it means that the Winnipeg native will miss a good portion of Week Nine and it opens up a roster spot down the middle.  With that being said, the Devils signed Scott Gomez to a contract, which may not bode well for Zajac's status.

This may quickly become an interesting situation for Allan, as we come up to Waiver Draft time.  Allan may have to hold out and see how long Zajac is out for, which may come around in time for his second selection.

The St. Louis Blues announced that both forward T.J. Oshie and defenseman Jay Bouwmeester were on the ice for practice on Monday morning, but didn't say anything about their availability for Wednesday in Chicago.

Definitely good news for Benson and Leo, especially for Week Nine.  Benson is likely considering a drop of Oshie in the second round of the Waiver Draft and I couldn't imagine Leo dropping Bouwmeester, especially if he's close to returning.

Link to the Injury/News Page
Posted by opiatedsherpa at 10:35 AM