Wow, we're almost done for another season!  These years are going way too fast for me, I can't imagine how fast they're going for you.  We've only got one week left to go in the regular season and yes, there will be a playoff pool, if you haven't yet figured out.  We're not quite done with the hockey pools until the summer.  Let's get right at it, I'm sure you're all dying to know who the award winners are for this past week.

It was a great week for individual achievements in hockey pool scoring, as Jimmy Howard of the Red Wings, Artemi Panarin of the Blue Jackets, Antti Raanta of the Coyotes and Jack Eichel of the Sabres all finished with 8 points in the week.  That would have made for a crazy tie-breaker between Panarin and Eichel in the end, but it was William Karlsson of the Golden Knights, who barreled through and finished the week with 9 points, taking the title outright.

Karlsson has now collected 42 goals and 75 points in 79 games this season for Vegas, which currently has him ranked as the 31st overall scorer in the hockey pool this season, which would be good enough for the 2nd round of the draft if we were to redo it with today's numbers.  That's not bad for a player that was let go in the expansion draft by Columbus and then taken by Scott, as the 1st pick in the Week Nine Waiver Draft.  Unfortunately for Scott, that hasn't helped his season overall, as his team had only moved up one spot since then.

This week was supposed to be Troy's bright spot week of the season and his team was right there, heading into the final day of action on Sunday, it had all the necessary projected games to be played and it fell flat.  It just couldn't keep up to Benson's team at all and the now 2nd place team in the pool takes his second nod of the season and it was a real disappointment to us all... except for Benson, I guess. 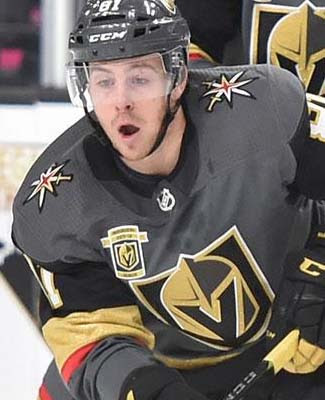 It was a 39-point week that took the title in Week Twenty-Six, as Benson's team finished Sunday with 3 points and Troy was shutout in the process, leaving his week at 36.

Benson's team was led by a couple of players with 6 points each, as Jonathan Marchessault of the Golden Knights and Filip Forsberg of the Predators were very good in the week, even with Forsberg missing a game for a rest this week too.  Auston Matthews of the Maple Leafs and Thomas Vanek of the Blue Jackets each chimed in with 5 points, while Rasmus Ristolainen of the Sabres rounded out the top scorers with 4 points.

Injuries were the better part of Benson's two players that failed to pick up points on his active roster, missing one forward and one of his goalies from the score sheet this week.

Benson's team was tied with Chris' for the pool lead in goal scoring in the week, both teams finished with 14 tallies each, while Jaroslav Halak did chime in with a win this week, before also getting hurt.

It has been mostly forward points that has carried Benson's team this season, as his team ranks 2nd in forward points with 503, 19th in defense points with 109 and 20th in goalie points with 78.  His team is in the money conversation, so take that strategy for what it's worth.  We'll talk more about the money spots here in a second.

A big Sunday did save a couple of teams from falling into the Basement Dweller spot on the Newsletter, but Steve's team had no answer for those other teams and all of a sudden got left behind in the dark.  Steve's team finished the week with 15 points, likely cementing his spot in 25th place on the standings.  Believe it or not, there was a glimmer of hope there in the last few weeks, if a few of his players could have gotten off their butts to score.

Connor McDavid of the Oilers and T.J. Oshie of the Capitals finished with 4 points each to lead the way for his team, but after that, it didn't look very good.  Five more players picked up a point, at least and there was nothing coming from his goaltending tandem, so it was a rough one, to say the least.

Steve's team will open the final week of the season with an 18-point deficit to Scott's team, which just had the Player of the Week nod attached to it, so I'm not going to be the one stressing hope at this time.  Hopefully, Steve has found a new strategy to take to next year's draft, even though he did have the first pick and is now likely going to have the pool MVP as well.

The lead at the top of the standings is now the biggest we've seen this season, 66 points.  We're just waiting on the final tally to know what we're engraving on the trophy for Stuart's name now.

2nd and 3rd place finishes are all but done, even though Benson jumped over Dale B. to take the meat spot in the money sandwich.  The difference between the two teams is now only 4 points.  Dale's spot is all but secure as well, as Clayton and Tony have continued to hang around, sitting only 11 and 13 points back, respectively.  A Mover & Shaker week from either of those two could really make things interesting.

The season-high week in the plus/minus department was a +30 rating from Troy's team, so this is just about where we can draw our line for possibilities in the coming week.

Dale B.'s team now currently leads the mini-game with a +90 rating overall and there are four more teams that are within that 30-point range, that could possibly do the deed.  It's highly improbable, but not impossible.  Brian, Steve, Clayton and Stacey M. all have a shot, some more improbable than others, but a shot.  The volatile nature of this statistic is what really makes it interesting, especially for the last mini-game to decide for the year.

Let's do the same thing here, as we did with the plus/minus... the record week in the PIM pool this season was only 49 minutes in the box.  That's not a whole lot, given that we all have 12 skaters and a couple of goalies that could get hot under the collar.

Wes' team has a 58-minute lead over Neil's in the PIM pool, thanks to a stunning 545-minute season.  It seems even more unlikely that Neil is going to find an hour's worth of minutes in penalties, especially with two players on the shelf.  There's a title of goon team of the year, but no money in for this cake walk to the finish for Wes.

The rookie pool has remained somewhat interesting, again for those who were watching this year.  It's a 3-horse race between Clayton, Chris and Cam.  It's a 7-point difference between Clayton and Cam's teams, Clayton's team leading at 117 points, while Chris is only 2 points back.  There's no need to look at weekly records for this mini-game, it's going to be a close finish.

Scoring-wise, the second-to-last week of the season was above average, thanks to a good number of games in the NHL, a season-high of 55 games in the week.  The pool finished with a combined 678 points, which was kind of mediocre, a 12.3 points per game clip, so that's disappointing.  We've been losing a lot of goalie starts lately, which hasn't helped and injuries have been piling up against the skaters, so there are significant reasons for these drops.

We're still waiting to hear more about the upper-body injury that Markus Nutivaara suffered on Saturday night against the Canucks, one that forced him from the game early and he was unable to return to. Nutivaara has been a serviceable defender this year for Columbus, appearing in 61 games, scoring 7 goals and 23 points, also registering a +10 rating as well.

The New Jersey Devils were fortunate to activate forward Marcus Johansson from the Injured Reserve on Sunday, but he wasn't able to dress for the Devils' game against the Canadiens on the evening.  The Devils also rotated some names in and out, as Jesper Bratt went back into the lineup, while Brian Gibbons and Damon Severson came out.  It looks as though both Gibbons and Severson were healthy scratches and we could say Johansson was too, if he was able to travel, so these three could figure back at any time in the last week of the season.

Bratt's return was good for Ryan's team, while Johansson coming "this close" to returning was a good sign for Scott's 24th place team, while the two other scratches certainly didn't benefit Steve and Eric at all.  All of these pool teams are down at the bottom of the pile.

We're awaiting more word on Steven Stamkos and his lower-body injury, which he reportedly suffered last night against the Predators. He left the game with the injury, not to return. Very few updates on the injury, so we'll keep you posted on this one.  Clearly, this one will have a real effect on the playoff races in the last week of the season.

This injury won't have much of an effect on the overall money standings though, as Derek B.'s team is not quite there.  His goal of 13th place, however, could be challenged, as his team now sits 1 point back in 15th place, after Sunday's action.

The Anaheim Ducks could have their hands full in the last week of the season, if John Gibson isn't good to go.  He was pulled out of the late game on Sunday night against the Avalanche, due to an undisclosed injury.  The team was taking some precautionary measures and not letting him go, which didn't seem to hurt the team too much, as they were able to pull out a 4-3 win in overtime.

This injury, if significant, could have an effect on the money, as Gibson has been one of Tony's best players this year.  If he wants to slide into 3rd place, he'll need points out of each of the Ducks' three remaining games this week.

Only three players returned to action on Sunday, as Zdeno Chara of the Bruins returned from his upper-body injury, while both Filip Forsberg of the Predators and Jesper Bratt of the Devils were back in the lineup after being healthy scratches. Good news for Steve, Benson and Ryan in this particular case.
Posted by opiatedsherpa at 7:00 AM