The Phoenix Coyotes have re-signed restricted free agent forward Mikkel Boedker to a new 2-year deal, worth $5.1 million, on Saturday.

Boedker was one of the few remaining RFA's in the league, which are likely hockey pool draft targets, that had to re-sign before training camp started next week.  With how the market has panned out for a number of RFA's this year, Boedker received a pretty good, yet average, deal from the Coyotes, who will welcome back with open arms.

In the shortened 2013 season, Boedker scored 7 goals and 19 assists in all 48 games, which had him 164th in overall pool scoring, a career-high pool ranking.  Boedker scored at a rate of 0.54 points per game, which is respectable in the mid-round picks.  It is definitely a rate that he can improve upon in the coming 2014 season. 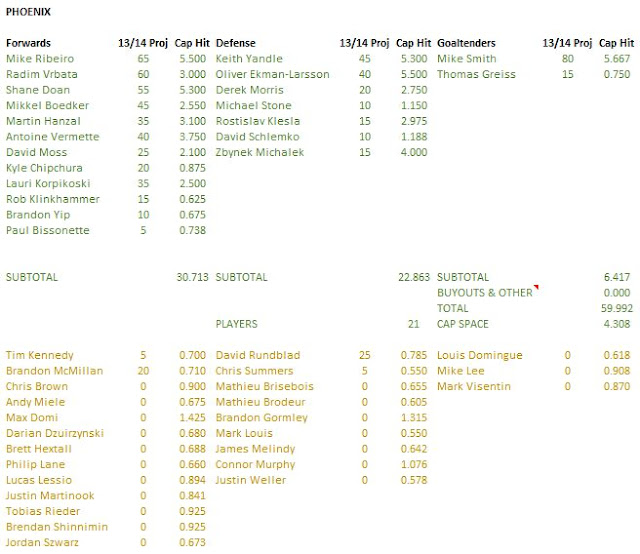 The Coyotes appear to be close to a full roster, heading into training camp, with very little spots open for their youth or any surprises to take. There appears to be one forward spot that could be open and there will be quite the dogfight to get it.  Of course, there are a couple bodies in the green, who may not be the safest going into the regular season.  Nevertheless, the Coyotes are safely under the salary cap ceiling, with about $4.3 million left in space.

Posted by opiatedsherpa at 2:33 PM