Pietrangelo Among the Elite

On Friday, the St. Louis Blues were able to wrap up their prized restricted free agent, signing defenseman Alex Pietrangelo to a new 7-year deal, worth $45.5 million.  His cap hit through the 2020 season will be $6.5 million per season, which means he'll be in the top 10 among NHL defensemen in cap hits.

Pietrangelo had a pretty good year in the shortened 2013 season, scoring 5 goals and 19 assists in 47 games, which ranked him 181st overall in pool scoring and 21st among all defensemen.  He didn't score in the top 10 among defensemen, but I don't think there are many people who think the 23-year old will be among the elite offensive blueliners in the league.

As for the 2014 season, I have Pietrangelo among the elite scorers right now, as I have slotted him in for 55 points, as the Blues have one of the more explosive bluelines and I think they are set to break out and really make some noise, led by their newly-signed ace. 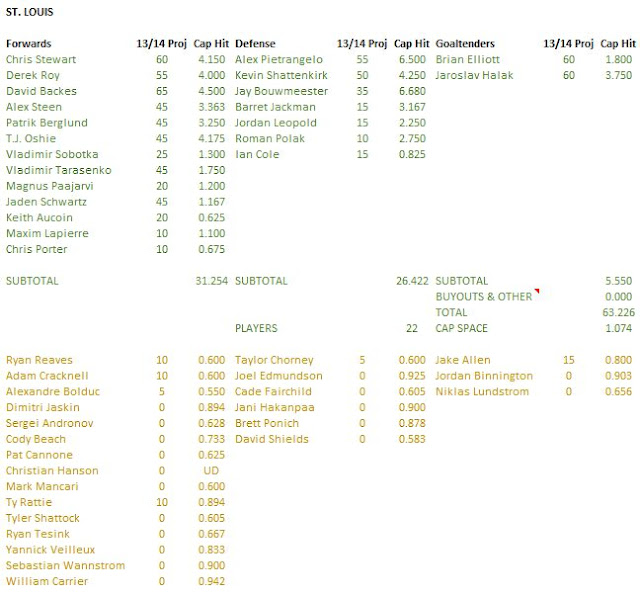 The Blues appear to have a fairly solid line-up on paper and now adding Pietrangelo's cap hit, they are now set for just a shade over $1 million left in cap space for the year. Throughout the year, they should be able to translate that into another addition at the trade deadline and it looks like the Blues could be a contender in the West.

Posted by opiatedsherpa at 4:40 PM